“This committee is a body of the UNESCO Executive Board that is currently meeting to prepare the decisions of the General Conference in November 2019. The NGP committee consists of 24 elected Member States (21 representatives were present), other States, UNESCO sectors and Non-Governmental Organisations (NGO) partners are allowed to attend as observers.  Also present were Jean Yves Le Saux, Assistant Director General in charge of the Office of Strategic Planning, and Sabina Colombo, chief of the Civil Society Relations Unit, who shed light on the exchanges. About 30 NGO’s representatives attended with the President and several members of the NGO-UNESCO Liaison Committee. 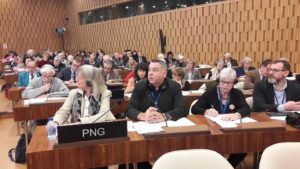 The main issue of this session of the Committee of Non-Governmental Partners of the Executive Board (207th session), was a reflection on strengthening dialogue and partnership with NGOs. It is stated in the preparatory document for this session, that NGOs are essential partners for UNESCO, because they create the link between the field and the UN agencies in order to make known the objectives and programmes and participate in their implementation.

As part of the current deployment of the United Nations strategic transformation, there is a plan to build long-term strategic alliances with programme partners. This new direction in partnerships became a direct goal in the 2030 Sustainable Development Goals (SDGs).  This objective (SDG17), concerns all partnerships and the place of NGOs is truly affirmed. A questionnaire on the reflection on strengthening partnerships was sent by UNESCO to the member states (56 replies were received). The analysis established that the strengthening of dialogue with NGOs is desired by member states, in particular for the implementation of programmes with the conclusion of strategic alliances to this end. The importance for UNESCO of having a strong network of NGOs, including NGOs in consultation, has been reiterated. The link between NGOs and UNESCO sectors should be stronger to work on programme objectives.

The organisation is doing well. It enjoys the recognition of its central role in the implementation of the SDGs (evaluation of an independent audit firm), however, it suffers from a drastic reduction in its budget ( a decrease of 50% in a few years, including 17% due to the U.S. withdrawal), and consequently, a reduction in staff; hence it’s needs to extend partnerships to other civil society structures.

The NGO-UNESCO Liaison Committee is a valuable forum for strengthening the partnership with NGOs, and plays an important role in the dialogue with member states, notably through the NGO-UNESCO forums and the International Conference of NGOs, to which an increasing number of state representatives attend.

The floor was given to the chairwoman of the Liaison Committee, Ms. Machon-Honoré, to present the work carried out over the past four years under the auspices of the Liaison Committee and those that are in the planning, such as forums, celebrated United Nations days, think tanks –  in particular the one dedicated to Strengthening Partnerships. Some NGO’s interventions followed on various issues and proposals for technical adjustments, from the group that participated in the thematic reflection on partnerships. Representatives of NGOs that had cooperated directly with UNESCO programmes in recent years had also spoken, including Mr. Beaussant, vice-chairman of the Liaison Committee, the International Council of Folklore Festival Organisations, which held an annual performance at UNESCO. Reference was also made to the work of the group of NGOs that organised together with the UNESCO Participation Programme, training courses for hydrological technicians in Africa.

The member states who subsequently spoke, endorsed the work of the Liaison Committee and also the cooperation of NGOs with UNESCO, either bilaterally or collectively with the Liaison Committee. They expressed commitment to continuing cooperation, and strengthening this through the current dialogue. The majority, however, reiterated that such cooperation should not go beyond the framework set out in the Guidelines, whilst respecting the Intergovernmental nature of the institution. The representative of a State questioned whether the Liaison Committee is open to youth organisations, the answer to this was yes, and this is already the case, with one organisation a member of the Liaison Committee, and its representative is responsible for youth issues in the work of the committee. After a fairly short, uncontroversial debate, with some proposed changes in the wording of some of the proposed resolutions, the Committee of Non-Governmental Partners voted and approved the preparatory document. These decisions, which will be submitted to the General Conference, preserve the current forms of cooperation with NGOs and encourage the search for opportunities for dialogue between states and NGOs.”