A blog by Gina Vucci of SI Marin County, California.

“Many people think that slavery ended years ago with abolition… however, there are more slaves today, than any other time in human history.

The International Labour Organization (ILO) estimates that there are more than 21 million slaves today being exploited for sex and labour — with some other global organisations estimating the number to be closer to 40 million.

So what exactly is human trafficking? Simply put, it’s the illegal trade of human persons. Referred to, almost interchangeably, as modern-day slavery, forced labour and human trafficking, it’s the act of recruiting, harbouring, transporting, providing, or obtaining a person for labour or sexual exploitation through the use of force, fraud, or coercion. It is commercialised violence and with the majority of victims being female (more than 70%), it is often seen as the most extreme form of gender-based violence. 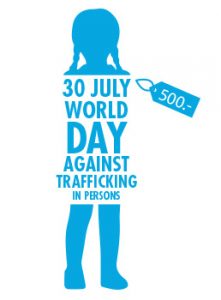 To raise awareness of this horrific issue, possibly the greatest social injustice of our time, the United Nations has dedicated July 30 as World Day Against Trafficking in Persons.

This is a highly lucrative criminal enterprise, second only to drug trafficking, with an estimated $150 billion in profits. With the proliferation of the internet, extreme profits and humans as renewable resources, it is extremely difficult to get ahead in the fight to end human trafficking.

The main forms of slavery and human trafficking include:

Sex Trafficking: People who are forced into commercial sex acts. ​

Domestic Servitude: People working in private homes are forced or coerced into serving or lied to and told they can’t leave. ​
​
Forced Labour: People forced to work under the threat of violence and for no pay, only food, water and minimal shelter. These slaves are treated as property.​

Bonded Labour: People who are compelled to work in order to repay a debt and unable to leave until their debt is repaid. It is THE most common form of slavery today.​
​
Forced, Early & Child Marriage: Often coupled with other forms of exploitation once they are married, women and girls are trafficked or sold for financial gain of their spouses and families.

Child Labour: Any enslavement — no matter what kind — of a child.

So what can we do to raise awareness of human trafficking and take steps to end all forms of modern-day slavery?

Become a conscious consumer. Check the companies you purchase from and their supply chains — including food, clothing, electronics and more — to ensure there is no slave labour used in creating their goods. (Coffee and chocolate have two of the highest rates of slave labour in their processing and production!)

Buy products marked “fair trade” or other official labels indicating they are produced in an ethical manner. Although they might cost slightly more for you, it could mean saving someone else’s life.

You may also write letters, use social media or contact businesses to call on them to end forced labour and slavery in their supply chains. (Of course not spending your money on their products is the LOUDEST message!)

Reuse, Recycle, Repurpose. Our consumerism drives demand and unwittingly, we contribute to the problem. By consuming less, we lessen demand for cheap goods, often made with slave labour.

Become a conscious investor. Check your investments to be sure the companies you are involved in do not have any associations with forced labour. In fact, you could invest in socially and environmentally responsible companies and put your money to work for good!

Get involved. Join local coalitions and abolitionist movements and offer your gifts, talents, time and money to support outreach, education, advocacy and justice.

Get active. Call on your representatives in government — from local to national — to take meaningful action to prevent and end all forms of modern-day slavery, and to create and strengthen laws and policies to hold criminals responsible.

Although this effort can seem overwhelming, even daunting, we have the power to change.

We can’t all do everything on this list, but every single one of us, can do some thing, even if it’s one thing.

Together we can make a difference. Together, in this generation, we can end slavery”.