Despite international concern and action to combat this modern scourge, the ILO estimated, in 2016, that there are 40.3 million people enslaved worldwide with 71% being women and girls.

Anti-slavery legislation in the UK began in 1807 with more recent Acts in 2014 in Northern Ireland, followed in 2015 by similar legislation in Scotland and England/Wales.

The reporting of suspicions in the UK is accomplished through a National Reporting Mechanism (NRM), hosted currently by the National Crime Agency. Their report in 2017[1] had 5145 reports, an increase from 1746 in 2012, with the majority of suspected victims coming from within the UK and from Albania and Vietnam. These numbers are probably the tip of the iceberg.

In Wales, a corporate approach to training across all agencies involved has been developed and is being made available across the UK at present. Networks based on UK countries and English Regions are developing but this is still patchy – see http://iascmap.nottingham.ac.uk – using the drop-down menus gives information about those ‘local’ networks. 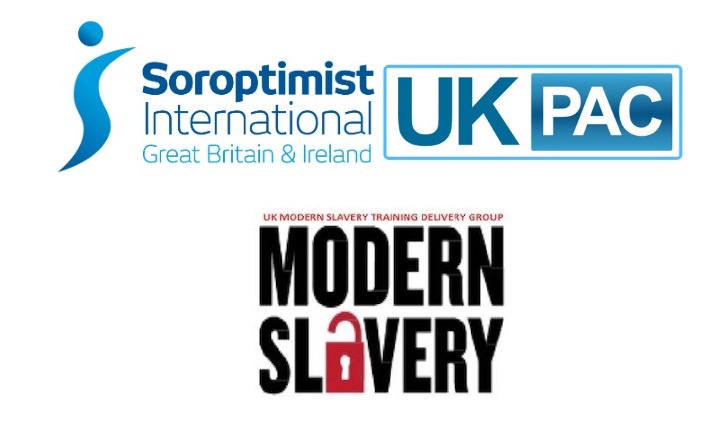 During 2016 Soroptimists in Northern Ireland (NI) undertook a survey of the public’s knowledge of trafficking and slavery. The UK network responsible for delivering training programmes asked the UK Programme Action Committee (UKPAC) to roll this out across the whole of the UK in order to inform them about the gaps they would need to fill. This survey was undertaken in October 2017 through both an online and a paper version and the report published on 7 July 2018 at our Study Day. There were 3764 responses online and 5553 on paper, a total of 9317.

The overall conclusions showed that:

The survey mirrored the questions used in NI with some additional questions, including one about the Modern Slavery Helpline, the best way to report suspicions and available 24/7.

There is still much work to be done if we are to combat this heinous crime. A guide for Soroptimists in the UK is available[3].

The Global Compact for Migration[4] being developed currently by the UN will be a step in the right direction for the worldwide community. This will be presented for adoption by the General Assembly in Morocco 10-11 December 2018.