“What is leadership? “The process of influencing the activities of an organized group toward goal achievement.” (Rauch & Behling)

Is the traditional leadership model relevant in today’s ever-changing world? What other forms of leadership can be more effective for the public sector? Do you have to be an elected or appointed official to be a leader in our society? How can we all be better leaders and integrate the goals and priorities of the SDGs into the international, national and local communities? 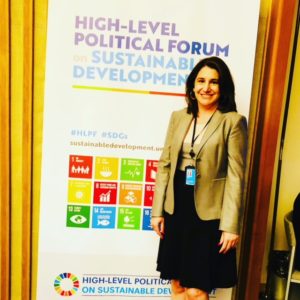 These were the core questions asked by the Leadership in the Public Sector class at the High-Level Political Forum (HLPF) today. The discussion was primarily led by Nikhil Seth, Assistant Secretary-General of the United Nations and Executive Director of UNITAR, and by Alex Mejia, Director of the Division for People and Social Inclusion at UNITAR and a former Minister for the Country of Ecuador.

Half of the class substantively discussed the questions above and half of the class was used to launch the new UNITAR-DESA UN Leadership Platform. This platform will allow accepted students to take a comprehensive course on leadership online with a face to face component in the end for an unannounced price. The main targets include world leaders and schools of administration of public policy. But it is open to other applicants as well, although the perimeters were not clear.

Nikhil Seth focused on the different kinds of leadership. Traditional leadership model uses a hierarchy approach and tends to look inward towards the institution itself. When implementing SDGs or advocating policymakers to implement the SDGs, we need leaders of institutions that are willing to also use the “Collaborative Leadership” model. This model seeks to build partnerships outside of their institutions and seeks experts to inform their institutions. It is at the heart of reform. Integrate other voices and bring them into your institution. Find the inter-relationship between issues among varying institutions and work together for a more informed and efficient approach. 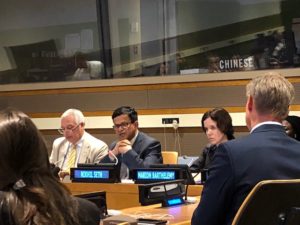 Another form of leadership mentioned by Mr. Seth is what he calls, “Adaptive Leadership.” It is traditional leadership combined with collaborative leadership and the willingness to adapt. This framework is a major challenge to the traditional leadership model, which has the leader at the top dictating the policy or rules to others down below with little regard towards collaborating with outside agencies or groups. The adaptive leadership is the current reality and makes the solo traditional leadership model one for dinosaurs. Technology is a huge driver that is making networks more effective and collaboration necessary to achieve goals. Adaptive Leadership also invites popular engagement, inviting citizens to get more involved to get results. It is leadership that has higher transparency and accountability to the people. We are producing new public servants that are using the modern approaches to leadership and this is causing the world to rethink Public Administration as a whole. 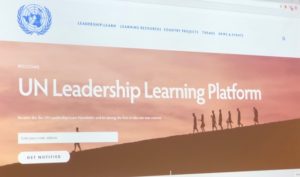 Marion Barthelemy, Director of the Office of Intergovernmental Support and Coordination for Sustainable Development, UNDESA, spoke of how the new approach is being utilised in parts of Africa by teaching SDGs to public servants in a municipality area. But training of the SDGs is only the first step. The leaders of the communities have to adopt the principles of the SDGs and they need to reflect the community values. For example, the principle of leave no one behind. How will the leaders of the community and institutions address implicit bias within that adversely affects a minority group in that community? The leadership development for the implementation of the SDGs needs a holistic approach that includes training, integration of the SDGs at the institutional level and reflection of values through accountable action. Another issue Marion raised was that for many public sectors jobs, the competition is high and based on individual achievement. How then to we train public sector leaders to transition to work on teams and across agencies in a more collaborative model?

Stefan Schweinfest, Director of the Statistics Division and Office in Charge of the Division for Public Institutions and Digital Government, UNDESA, spoke about the Global Initiative on Schools of Public Administration at the UN Public Service Forum. At the recent UN Public Service Forum held in Morocco, there were seventeen key recommendations, with five specific to leaders. “Leadership is at the core of strong institutions,” Schweinfest said. The global initiative for schools of public administration is to inspire public service leaders to work towards the 2030 agenda by including the SDG goals in their day to day work. The forum is changing how schools of public administration are teaching leadership and is impacting the progress of the SDGs by having the schools integrate them into their curriculum for future leaders in public service.

Lastly, the new UNITAR-DESA Leadership Platform unveiled will allow leaders at all level of government to receive training in critical modern approaches to leadership. This is applicable not only to successfully integrate the SDGs into all levels of government but also to develop better leaders at the local, national and international level. Alex Mejia spoke about the reality of public service leaders being limited to a set of rules of conduct that is not about following the law, but about not rocking the boat. Leaders in the public sector often stifles creative problem solving, entrepreneurship and punish innovative thinkers because they are challenging the traditional leadership and system. UNITAR-DESA Leadership Platform seeks to provide real tools to make people better leaders from within first so they can better serve. It even covers the psychological components of the leader and E.Q.

We as NGO leaders need to influence, inspire and support public sector leaders who can learn to implement these different models of leadership in order to achieve the goals of the SDGs. The UNITAR-DESA Leadership Platform is providing this opportunity worldwide digitally. The SDGs are relevant in all communities and at all levels of government. It is time to move our leaders into the new century and join the international community of change”.