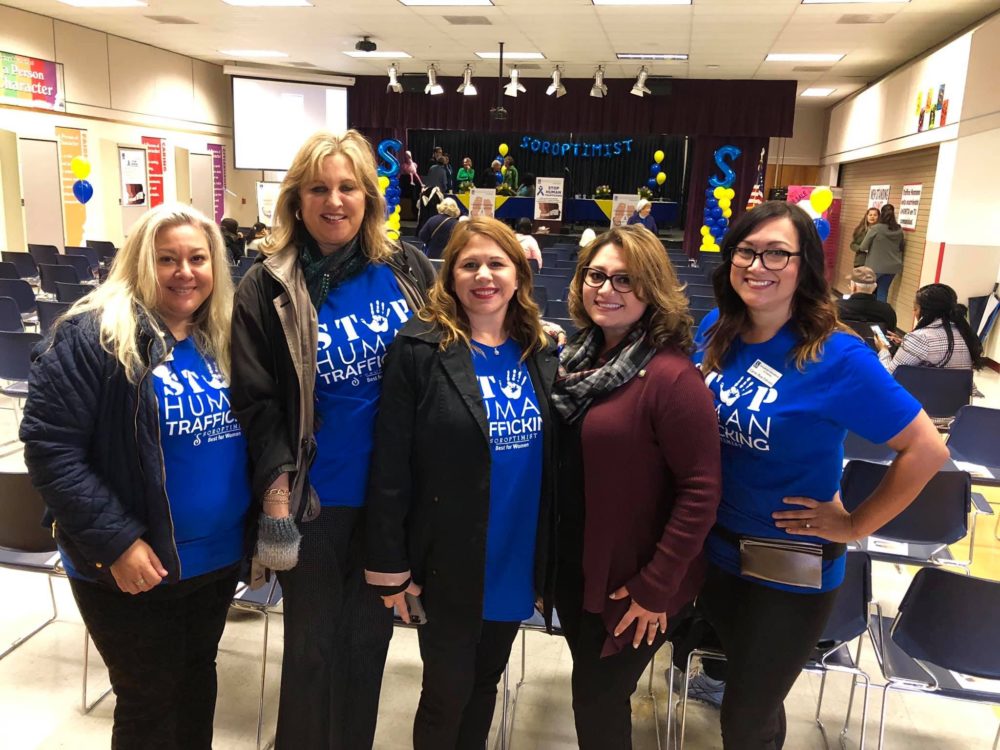 Human trafficking is the number one growing criminal enterprise in the world and is a horrendous violation of human rights.

In 2011 the United States, under President Obama, issued a Presidential Proclamation designating each January to be National Human Trafficking Awareness Month. Slavery was officially abolished in the U.S. under the Thirteenth Amendment in December 1865; however, there are now more slaves within this country than ever previously recorded in U.S. history.

There are two types of trafficking – Sex trafficking and Labour trafficking. According to the Department of State, California, Texas, New York, and Florida are the states with the greatest human trafficking activity. California Against Slavery reported that three of the worst child sex trafficking areas in the U.S. are in San Francisco, Los Angeles, and San Diego. 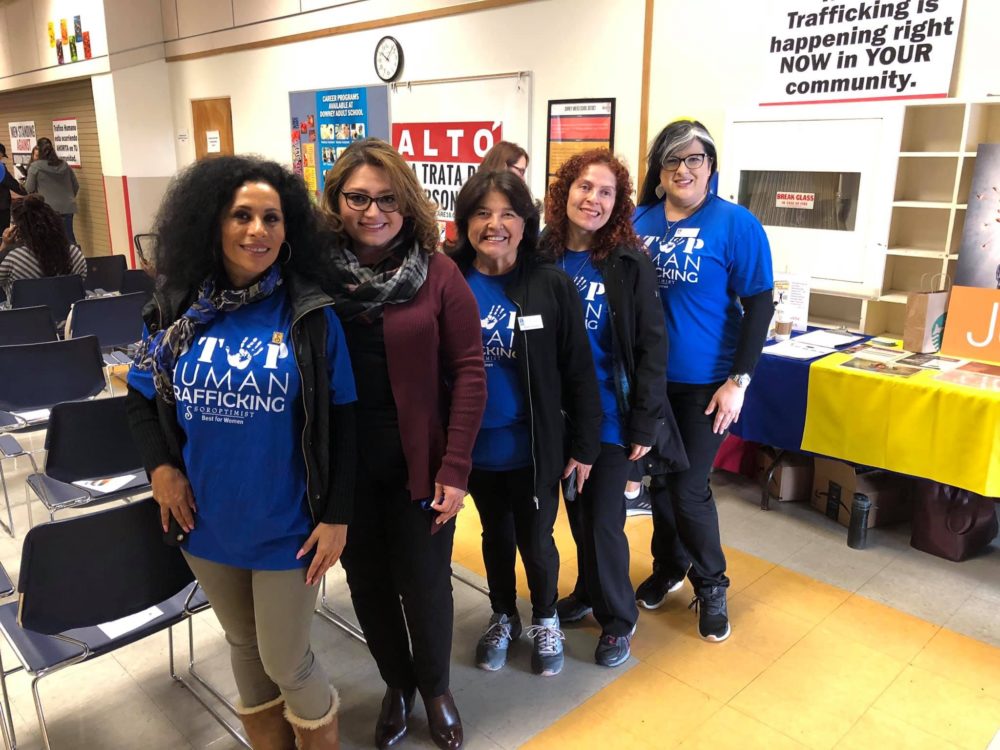 Human Trafficking is an appalling human rights violation and is a rapidly growing enterprise. Gangs in the U.S. are no longer fighting for turf to sell drugs or weapons; they are fighting for territory to enable the trafficking of humans. Gang members realised that their drugs or guns can only be sold once, but an entrapped human can be sold repeatedly and thus bring in greater profits. A pimp/trafficker that can attain five girls, can generate anywhere from $600,000 to $800,000 dollars in a year.

My focus is on the most vulnerable – children, teens, foster children, and runaways which California has a huge volume of and can tie back to the State containing the three worst child trafficking cities in the U.S. Traffickers and pimps have mastered the art of manipulation; they can easily identify those most vulnerable and know exactly what to say and what to do to gain their trust and ultimately bring them into the cruel industry of human trafficking. We must educate ourselves in order to stay alert and spot the signs of potential human trafficking victims. The following phrase is a simple phrase but one that carries huge importance and cannot be stressed enough – “Please if you see something say something. I do not want to break your heart, we just need to break the silence.”

We CAN help set innocent lives free and in order to do so we must come together as a human race and show compassion for one another. We need to get together with our city councils, our communities, our schools, our PTA’s, our clubs, our religious institutions, and all other institutions in order to help our law enforcement agencies in eradicating this growing epidemic.

SI Downey is proud to be able to begin a movement in our city. 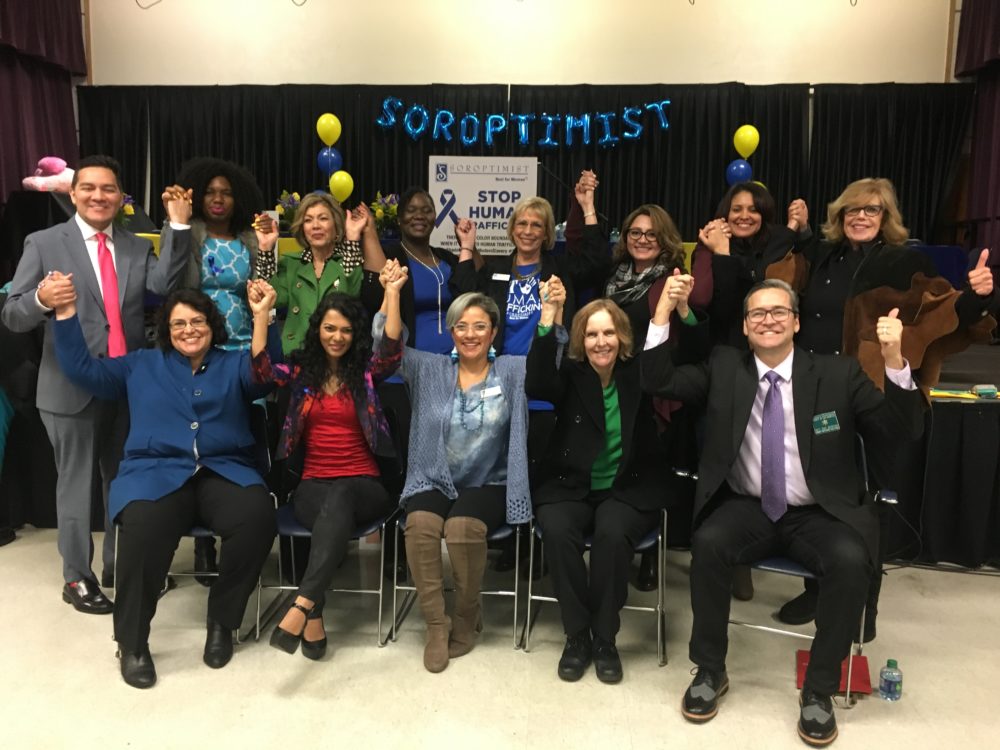 Human Trafficking 101 was a presentation by two SI Downey members who received training from the Los Angeles Regional Human Trafficking Task Force (LARHTTF) and the Coalition to Abolish Slavery and Trafficking (CAST). This forum helped raise local public awareness of human trafficking and modern slavery along with its impact on not only women and girls but on boys as well. An open panel at the end of the forum allowed attendees to ask more in-depth questions and find out what they can do to help and join the fight.

Fair Trade vendors also participated, enlightening the audience with information about how to recognize and purchase goods that are produced in facilities free of human trafficking; remember your purchasing decisions have the potential to result in involuntarily support of human trafficking – it is important to trace the roots of your goods including coffee, tea, chocolate, and sugar as many of these commodities are harvested and/or manufactured by forced labor in developing nations.

As Chair of the event, I invited prominent speakers:

Cherise Charleswell MPH: The Development and Outreach Manager of a Journey Out, a well-known organization who assists human trafficking survivors.

Mary David: The Director of Communications for Journey Out as well as a former prosecutor and UN Advisor. Mary helped draft some of Maryland’s first laws against human trafficking.

Susan Patterson: A national leader in the fight against human trafficking and founder of the So-Cal Faith Coalition Against Human Trafficking that engages over 200 leaders from faith communities to look at what they can do to end human trafficking.

Attorney Diane C. Reyes:  Has been an attorney for 20+ years and represents abused and neglected children, many of whom were victims of trafficking.

Following this very successful awareness event, Soroptimist International of Downey was recognized at the City Council meeting on January 22nd, 2019 and was honored to receive a Proclamation from the City of Downey”.