This edition of ‘Your Voice at the United Nations’ features articles relating to Disaster Risk Reduction (DRR), Universal Health Coverage (UHC), and the Construction of World Citizenship.

6th Session of the Global Platform of Disaster Risk Reduction (DRR), 15 May, Geneva 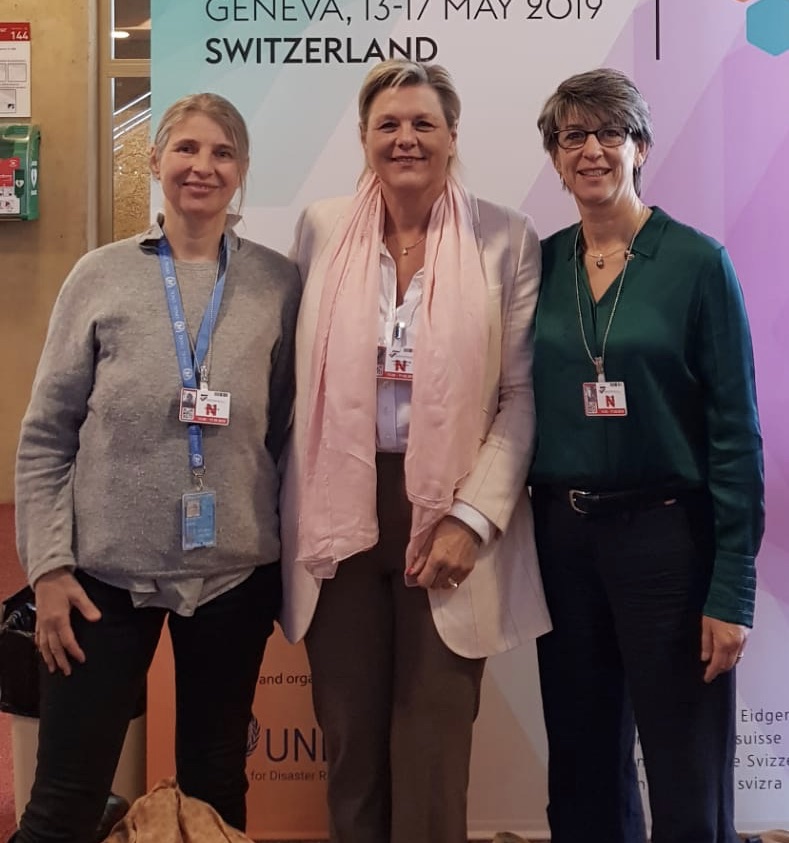 Our newly formed team of Representatives in Geneva, Kristin Reynisdottir, Berthe De Vos and Stacy Ciulik , joined one another in attendance at the 6th Session of the Global Platform of Disaster Risk Reduction (DRR).

“The opening statement came from Ms. Mami Mizutori, Co-Chair and Special Representative of the UN Secretary-General (SRSG) for DRR, who shared that this forum represents the 7.7 billion people worldwide at the UN and this forum has not come together in a Global Platform since 2013.

Following Ms. Mizutori, Mr. Michael Møller, Director of the UN Office at Geneva, affirmed the meeting’s focus as being “squarely on implementation”, noting that achieving the 2030 Agenda will not be possible unless DRR is mainstreamed across all activities. He voiced the shared responsibility in making the Sendai Framework successful, in order to achieve the 7 targets in 7 years. As a means to accomplishing this goal, defining what constitutes as disasters is imperative. With that foundation in place, the goals for agenda 2030 can start to fall into place: helping save lives, reducing disaster losses and improving management disaster risk.

Mrs. Amina J. Mohammed, UN Deputy Secretary General, sent a video message to explain that disasters such as heat, drought, flooding landslide, and earthquakes are reasons that people leave their homes to find safer places to live. Terrorism and cyber-attacks challenge the resilience of our interconnectedness but joining forces could, nevertheless, leverage an enormous “resilience dividend” from nature-based and technology-enhanced solutions.

Mrs. Jayathma Wickramanayake, UNSG Special Envoy on Youth, explained that 1.8 billion of the world’s population are between the ages of 10 and 24 years of age. In times of disaster, youth are among the first responders, and their resilience and resourcefulness in crisis situations too often goes unnoticed. She urged leaders to tap into the potential of young generations and respond to their calls for action.

The world needs to transform now. Countries need to be supported in building resilience and addressing interdependency, and voices of civil society need to be heard to ensure that the move from commitment to action takes place soon.”

Click here for more information on the Sendai Framework

UNESCO Working Group on the ‘Construction of World Citizenship’ 20 May, Paris.

On 20 May, Evelyne Para, SI UN Representative in Paris, attended a UNESCO Working Group on the ‘Construction of World Citizenship’ in preparation for the 2020 UNESCO World Citizen Forum.

“Organized in the year of the 75th anniversary of the United Nations, I think this Forum will be a good opportunity to recall the important role played by NGO’s and civil society organizations in the promotion of tolerance, equity and peace in the world.

I have been appointed reporter of Working Group 3: ‘Building World Citizenship through prevention or management of conflicts, living together, education, non-violence, culture and art’. This Working Group is a chance for highlighting good practices, approaches and strategies needed to improve living together in an increasingly diversified world and to take up interconnected challenges”.

After constructive discussions between all participants of the Working Group 3, the first ideas about good practices to be valued became clear:

The event introduced some interesting facts for discussion. Half the world’s population is lacking in access to Health Care; the importance of health as a social contract, not simply a means to make profit; and a need for services to reduce Pregnancy Mortality, via education campaigns to develop awareness of pre-conception health. There was strong consensus amongst most on the importance of improving Primary Health Care services, and the ‘Integration of Gender Equality’ targets (SDG 5) into Health Care, not only for those receiving service but also for health care workers, who need further empowerment; women represent 80% of the Health Care workforce but only 19% are in leadership positions.

One of the main discussions seemed to be over private versus public services and financing. In this sense, Health Care is universally recognized as a public good: at its Primary level it includes access to services, medications, reproductive medicine and counselling, and vaccines, it should be delivered by governments and be part of the Social Contract. Health Care should represent at least 5% of a country’s budget, and should be considered an investment, not a cost.