At the 26th Session of the Commission on Crime Prevention and Criminal Justice 2017, UN Vienna May 25, 2017, SIE Immediate Past President, Ulla Madsen was panellist at the side event, ‘The Lost Children – Safeguarding unaccompanied migrant minors from going missing’.

“The International Day of Missing Children is commemorated on 25 May” explains SI President Yvonne Simpson, “and so it was appropriate for Soroptimist International and Zonta International to come together with the support of the Mission of Portugal, to organize an event at the Criminal Justice and Crime Prevention conference in Vienna on missing children”.

Using fields of expertise, statistics and reports, policies, strategies and monitoring, as well as best practice examples, a panel of experts discussed the issue of unaccompanied children and young people travelling to Europe, and the importance of their protection from trafficking, exploitation and abuse. The root causes behind human trafficking and child abuse were addressed and analysed based on various perspectives including countries of origin, countries of transition and countries of destination.

Ms. Ulla Madsen addressed the issue of safeguarding unaccompanied migrant minors from going missing. Amongst the various drivers that force thousands of children to leave their homes every month – war, parents’ death or poverty – Ulla highlighted the dangers that these minor migrants face during their journey to Europe; such as detention in countries that do not respect Conventions; and the many networks of trafficking, forced labour and prostitution. Ulla Madsen praised the recent EU policy, which encourages the protection of children, but stressed the risks faced by children when taking on the thousands of kilometres’ migration routes to Europe, where they cross many countries – in a vacuum of proper laws to protect children.

Ulla called for scaled up reception and care in every country of transit and for collective effort to support and welcome these children and says: “In the long term I believe the International community must hold a responsibility in equipping young minor migrants with the necessary skills and values, essential for them to one day return to their homes and play a part in rebuilding their devastated countries”. 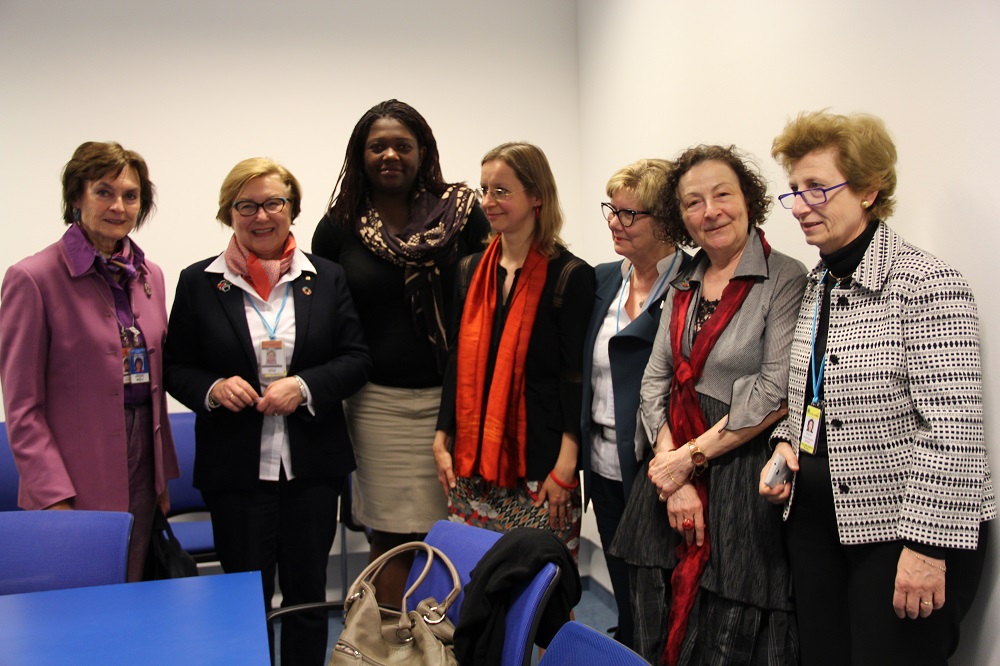 Ms. Silke Albert, Crime Prevention Expert from UNODC (United Nations Office on Drugs and Crime), spoke on how we lack expertise in prevention, despite doing well with intergovernmental legislation to criminalize trafficking in persons. She provided some challenging statistics: 1 in 8 migrants is a child. 22 million children are forcibly displaced. 28% of detected trafficking victims are children – and that this breaks down to 20% girls and 8% boys. Children are particularly vulnerable, especially if unaccompanied without parental or adult protection. Young people believe promises and are easily exploited. They are already going through harrowing experiences, without the added issue of trafficking.

Vivianne Tassi Bela, Senior Gender and Human Rights Expert, UN Evaluator and Consultant from Uganda spoke of Governance failures such as corruption, and stated that the lack of opportunities provided by local governments are amongst the causes of poverty and migration. Migration is caused by economic reasons, fear of abduction by Boko Haram, severe droughts, floods, and storms. Children are walking 5 hours for water, and kidnapped on route. Girls are kidnapped on their way to market or school. Forced marriage is common – every 2 seconds a girl becomes a child bride. Girls are excluded from the community, isolated and looking for anyone to look after them. Some are doing this through the internet. 39% women are married before the age of 18 in Sub Saharan Africa. The number of child brides is expected to double by 2050.

Yael Danieli, Psychologist and traumatologist with the International Organisation for Victim Assistance spoke on the lessons learned from unaccompanied children of the Holocaust. She spoke of the emotional and physical problems that beset these children. Good people looking after migrant children often had little understanding of the issues caused by different language and culture. With parents and community absent, everything familiar was disrupted and at school, they were treated as a novelty, many becoming clinically depressed. Amongst the Holocaust survivors are Nobel Peace Prize winners, successful business men and women, each with haunting memories of being lost children. Many become children with a mission – to be the voices of all the lost children. Trauma does not end with the end of war, and there is often a multi-generation impact when their experiences determine how they go on to raise their own children.

Excellent feedback was received following the event which saw 46 participants, including persons from UNODC, Human Rights Division, missions and people from International Organisation for Migration, African Women and other organisations.

Yvonne Simpson concludes by saying: “We would like to thank our SI UN Representative in Vienna, Dora Vrdlovec for her contribution to the organisation of the event”.