This edition takes a closer look at the current assignments of SI’s Representatives operating at the UN Headquarters in New York.

First up, Frances Zainoeddin talks us through her key focus area at the Commission on the Status of Women (CSW) and the High-Level Political Forum (HLPF) held annually in New York.

“My advocacy work for SI is primarily related to older women.  I do this through my various positions as Vice-Chair of the NGO Committee on Ageing , Co-Chair of its Subcommittee to Promote a Convention to Protect the Rights of Older Persons, and member of the Steering Group of the Global Alliance for the Rights of Older People. 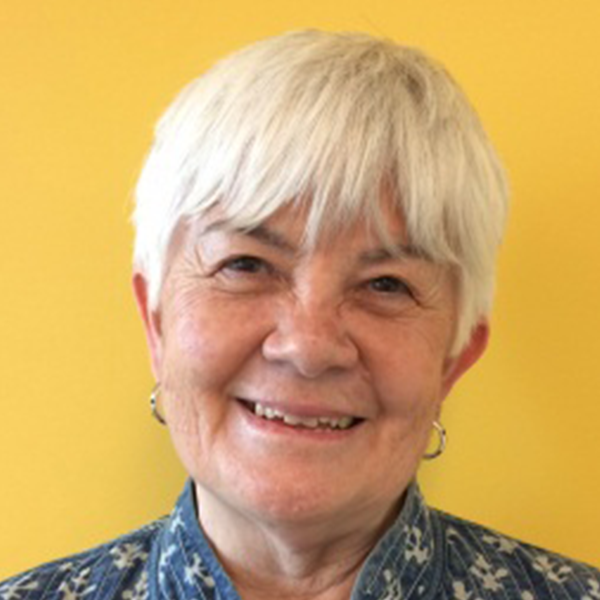 Ageing issues were raised at the HLPF in 2020 and 2021 when it discussed the implementation of the Sustainable Development Goals.  The ”Discussion papers” submitted by the Stakeholder Group on Ageing (SGA) for 2020 and 2021 can be found in the official document which consolidated the summaries submitted by a number of Major Groups and Other Stakeholders (MGOS) here.

During CSW in 2020 and 2021, there were side events on issues of particular concern to older women – age discrimination, violence, neglect and abuse (emotional, physical, financial), widowhood, removal of property rights, gynecological issues beyond reproductive age, unpaid work, and absence of lifelong learning which has an impact on autonomy and independence.  During CSW in 2020, SI organised a side event on older women and homelessness.  All discussions pointed to the need for legislation, policies and programmes to take a life-course approach, when addressing gender inequalities”.

Next up, Maria Fornella-Oehninger explains how she has utilised her position as Co-Chair of the Committee on Social Development to advocate for access to technology to be recognised as a human right for all.

My main focus of activity as part of the New York team is Co-chair of the Committee on Social Development (CSocD).  I was elected in April 2020 for a two-year term. As Co-chair, I was very focused on educating the team and committee members on the priority theme: A Socially Just Transition to Sustainable Development: the role of digital technologies for the dignity and well-being of all: and advocating  for this issue. Many hours were spent on advocacy work, virtually meeting with UN Permanent Missions and working towards our Civil Society Forum which is an official part of the commission’s official programme. My co-chair, Monica Jahangir-Chowdhury and I were also invited to participate in the Opening Session via video; we oversaw morning briefings with UNDESA and members of the Bureau; coordinated participation of NGOs in main debate and dialogs of the Commission; coordinated question and answer panels; organised and presented the Closing Session.  I also had the opportunity to represent NGO CSocD as speaker on the Club de Madrid Side-event: “Transforming Multilateralism for Social Justice and Inclusion”, where I presented our vision of a new Multilateralism that includes civil society at its table from the early stages of discussions and negotiations, as well as the need for a new Social Contract based on Eradication of Poverty, Social Cohesion and Decent Work. 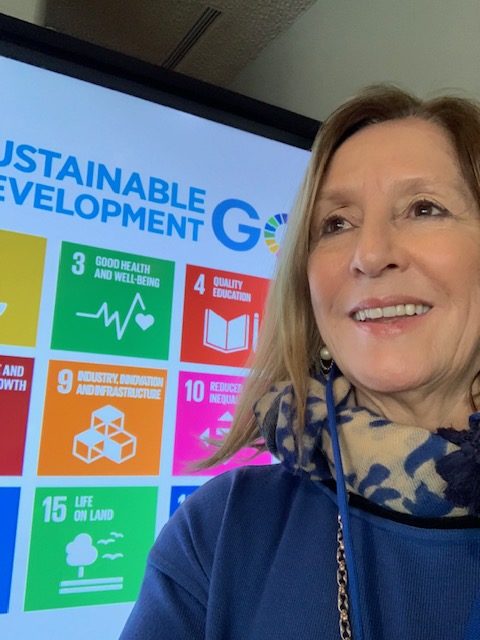 The 59th session of the Commission on Social Development took place February 8-17, 2021 at the United Nations Headquarters in NY. Under the chairmanship of Ambassador Maria Cristina Squeff of Argentina, the session was held in a hybrid mode, partly virtual and partly in person. Most member-states’ representatives met in person, in the General Assembly Hall to respect the rules on Social Distancing. The priority theme for this session was “Socially Just Transition toward Sustainable Development: the role of digital technologies on social development and the well-being of all.” Special attention was given to how the impact of COVID-19 has disproportionately affected the most vulnerable members of our society. The pandemic has exacerbated existing inequalities, both within and among countries.  The digital divide has been a contributing factor in leaving behind those who lack access or necessary skills to use technology remotely. Four resolutions were passed by consensus, including one on the priority theme.

The NGO Committee on Social Development had several opportunities to participate during the General Debate, the Interactive Dialogs and through its Civil Society Forum. The NGO Committee had focused its advocacy on demanding the member states to recognise access to digital technology as a human right. The Commission’s final resolution on the priority theme encouraged member states to promote affordable and equitable access to all social services and suggested that technology had the potential to do that but came short of recognising it as a human right.”

Next, Jacqueline Shapiro talks us through her longstanding involvement in the Working Group on Girls (WGG),  and the NGO Committee to Stop Trafficking in Persons (CSTIP).

“The Working Group on Girls was formed in the lead up to the Fourth World Conference on Women to ensure that the particular challenges faced by girls around the world would be singled out in discussions. Section ”L”, the Girl Child”, of the Beijing Platform for Action has been the basis of twenty-five years of advocacy of the WGG at the United Nations. I was privileged to be one of the first Co-Chairs of the WGG. Throughout those years the WGG has endeavored not only to be a voice for girls’ rights and well-being but to champion the participation of girls themselves in UN meetings. Since the 2011 establishment of the annual UN International Day of the Girl Child (IDG), the WGG has focused primarily on girls’ participation, to the detriment of some of its other activities to promote girls’ empowerment and their human rights. I was recently elected to the WGG Board and our goal is to restore some of the dormant aspects of advocacy for and with girls without losing the important strides achieved in enhancing girls’ participation. In addition to the IDG, the WGG has made a pledge for the International Year for the Elimination of Child Labor (2021) to create with high school girls a model for educating youth on sustainable clothes shopping. We also intend to work with girls and our member organisations to develop girls’ advocacy around the priority theme for CSW 2022 of climate change and environmental and disaster risk reduction. 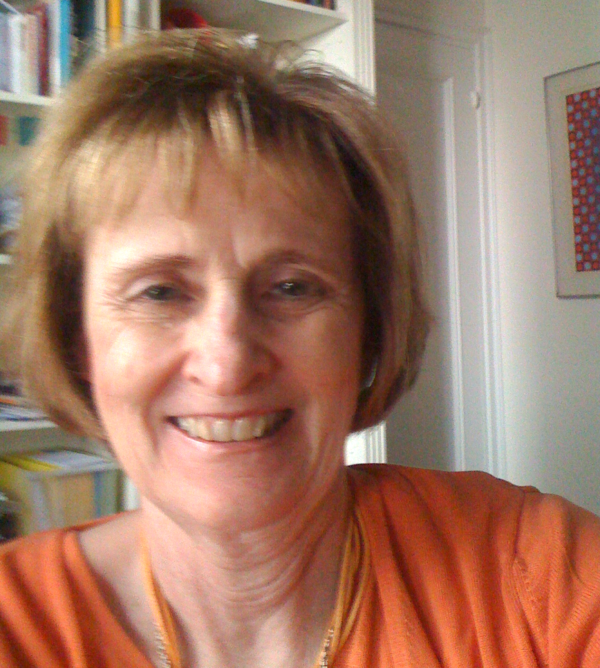 Although I have just ended several terms on the Steering Committee of the NGO Committee to Stop Trafficking in Persons, during COVID, I have been involved in organising three especially noteworthy programs. On December 1, we hosted a webinar on UN TV on “Bankrupting the Business of Human Trafficking 101”. In April, as a continuum to that program, CSTIP organised four breakout sessions with 21 experts from law enforcement, government, business and civil society to gather the best ideas for ending human trafficking. We are currently compiling these to guide our future advocacy initiatives. I have also been involved in organising a webinar collaboration between the NGO Committee on Migration and Stop Trafficking in Persons, “Improving Outcomes for Migrant Children at Risk of Trafficking” as part of the 2021 International Year for the Elimination of Child Labour. I am currently representing CSTIP in a partnership of five NGO groups to advocate for member states to ratify ILO Convention #190 concerning the elimination of violence and harassment in the world of work.” 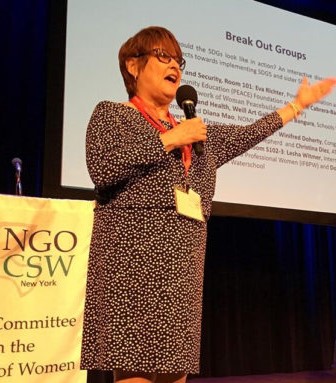 “As Lead Rep, I serve as SI’s voice in various coalitions as well as support the work of the New York team. Over this past year, I have had several opportunities to step up and take on roles within the official UN processes, the Women’s Major Group, and other NGOs.

Most recently, through a very competitive selection process, I was selected to represent civil society at the 2021 HLPF Expert Group Meeting (EGM). Prior to any major commission or fora, the UN holds an (EGM). The purpose of the EGMs are to bring together ‘experts’ from UN agencies, member states, civil society, academia, research and private sector to address the proposed theme of the meeting and make recommendations and action plans that will be used to form the basis of the Secretary General’s (SG’s) report on the topic.

Over the course of the 3-day meeting, I had the opportunity to represent the Women’s Major Group as an expert on Goal 1 – Poverty, and to make several oral interventions. Also, in preparation for the EGM, I had the responsibility to draft a written statement that was then circulated to members of the WMG advocacy group and other NGO representatives for additional inputs and edits, as well as answer the questions that the organisers will use to formulate the Secretary General’s report. Francesca Fletcher Williams (SI Global Policy Coordinator) served as editor. Once that process was completed the next step was to submit the written statement to UN Department for Economic and Social Affairs (DESA), ready for posting on the UN website.

Opportunities like these, and working through coalitions or in collaboration, are the way that Soroptimist International is able to influence Global Policy at the UN.”