‘A Sustainable Society for All Ages: Realising the potential of living longer’

The United Nations Economic Commission for Europe’s Ministerial Conference on Ageing was held from 21-22 September in Lisbon to consider the third review and appraisal of the Madrid International Plan of Action of Ageing (MIPAA). SI UN Representative in New York, Frances Zainoeddin reported on the event.

The ECE analysis of the review and appraisal of MIPAA found that there remained an urgent need for reforms and investments to prepare social security systems, health and care services, including long-term care. The analysis also noted that ageism, discrimination, violence, abuse and neglect of older persons, particularly of older women, in their various forms remained a significant challenge in the region. Expert panels discussed: (a) Recognising the potential of Older Persons; (b) Encouraging Longer Working Life and Ability to Work; (c) Ensuring Ageing with Dignity; (d) Recognising the potential of older persons. Civil society representatives also participated in the Ministerial discussions. The 2017 Ministerial Declaration acknowledged the importance of a life-cycle approach and endorsed the need to combat ageism.

The Regional NGO Forum on Ageing was held on 19 September 2017, when civil society had the opportunity to foster dialogue amongst civil society organisations representing older persons, to discuss the main themes of the Ministerial Conference, as well as international strategies aiming at the improvement of the human rights of older persons. The NGO Political Declaration called upon Member States to ensure that older persons and their organisations are included in the implementation, monitoring and evaluation of Agenda 2030, develop policies to effectively ban any form of age discrimination, ageism, pejorative behaviour, violence  and abusive towards older women and men; remove barriers and strengthen the voice of older persons and their organisations in research and the monitoring and implementation of all relevant policies; promote all older women and men’s right to dignity, well-being, adequate income, freedom, security and social inclusion; actively engage with older persons and civil society to ensure that the commitments made at the Ministerial Conference are fully realised. The NGO Forum strongly supported the recommendation of the UN Independent Expert on the rights of older persons to establish a binding legal instrument on the human rights of older persons. 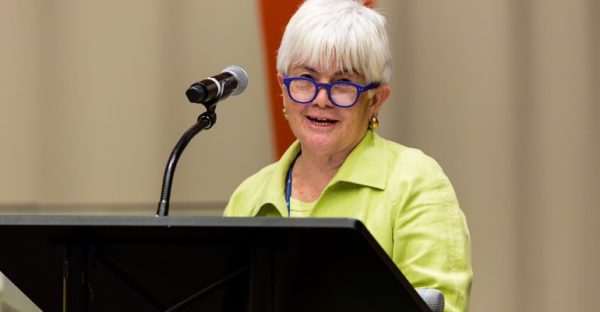 At one of the panels during the NGO Forum, Frances gave a briefing on the High Level Political Forum that is responsible for follow-up and review of the 2030 Agenda for Sustainable Development, and the role played by civil society; and on the work of the Open-ended Working Group on Ageing, which is discussing the possible elaboration of an international instrument to protect the rights of older persons.

On 10 – 13 October, SI UN Representative in New York, Marie D’Amato Rizzi attended Civil Society Policy Forum (CSPF), which took place as part of the 2017 World Bank Group/IMF Annual Meetings in Washington, DC. The CSPF provides an open space for NGOs to dialogue and exchange views with World Bank Group and IMF staff, their peers, government delegations, and other stakeholders on a wide range of topics.

In October 2017, the World Bank president, Dr. Kim, launched the WB Human Capital Project -an effort to encourage countries to invest in their people and grow their economies as a critical step to boosting inclusive economic growth and ending extreme poverty. The World Bank also issues Sustainable Development Bonds related to the SDGs for projects related to the environment, health, and education, for example mother and child health care projects in Panama. 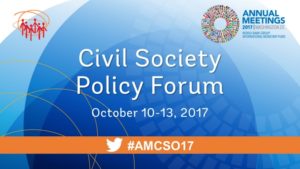 The IMF realises that at least some elements of gender equality are relevant to fulfilling its mandate to ensure global financial stability. Prior to 2013 gender equality was barely addressed in the IMF’s Article IV surveillance reports. More recently, this has changed, and the IMF recognises that there can be significant macroeconomic gains from increasing the female labour force participation and the IMF is now exploring “gender” as an “emerging issue.” Based on their recent research, the IMF included “gender” in their 2015 Guidance Note for Surveillance Reports. Monetary policies impact not only gender equality, but also poverty and other SDGs. Regarding social protection, the IMF has broadened its engagement in recent years in response to its membership. They do this by integrating social protection measures into program design or conditionality. However, it was clear during the Forum that civil society believes there is need for more in this area.

‘A look at CEDAW’

On 11 October, SI UN Representative in Paris, Marie-Christine Gries attended an attended a workshop on Convention on Elimination of Discrimination Against Women (CEDAW), organised by the National Council of French Women (Conseil National des Femmes Françaises). In attendance were Nicole Ameline, past French minister and member of CEDAW Committee, now president of the working group CEDAW-UN Women, and three others French specialists of rights and gender discriminations. The purpose of the workshop was to raise awareness of the importance of the Convention on women’s rights, to insist on the key points of this act, and to comment on its application by France.

Nicole Ameline underlined that CEDAW, ratified by 189 states (of the 195 represented at the UN) is an international legal instrument which upholds equality of men and women. In achieving SDG 5 (gender equality), this Convention is used as a benchmark. France has not applied the Convention in an exemplary manner. In 1999 the principle of parity was established in France for political mandates, in 2006 the Civil Code was revised, and the minimum age of marriage was increased to 18 for both sexes (previously it was 16 for girls). The Code of Commerce was revised in 2012 to include articles on women’s access to senior management positions. 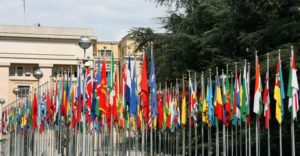 Far from being able to envisage that the Convention could be amended to take account of possible advances, it is now essential to defend it as it stands, to affirm its universality acquired by the number of signatory States Parties, to avoid the emergence of counter-conventions supposedly legitimized by different regional cultures. At the conclusion of this workshop, the participants unanimously agreed that if this Convention had not existed since 1979, it would be unlikely to be able to draft it and have it adopted so widely.

‘Answering the Call of October 17 to End Poverty’ 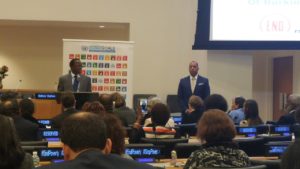 17 October marked the International Day for the Eradication of Poverty, this year’s theme was Answering the Call of October 17 to end poverty: A path toward peaceful and inclusive societies. SI UN Representative in New York, Sandy Hecker attended an event supported by the Permanent Mission of Burkina Faso to the UN and Permanent Mission of France to the UN. All speakers at the event agreed that all nations and sister agencies must work together to eradicate poverty and to do so there must be a greater understanding of some of the root causes. Professionals working with poor families need further education and sensitivity training in dealing with poor families. Too many families are being humiliated and suffer embarrassment. Poor people should not be held responsible for their plight. Children are being taken from parents. Activist and Human Rights Defender, Seamus Neville shook as he told attendees about the day his son and daughter were taken from him. Without Seamus’ permission, the Irish government put his daughter up for adoption. Now he and the other speakers are activists defending the rights of the poor in their country.

The Problems Are Immense

Water, land and oceans are the bedrocks of Africa’s economies. Its economic activity depends on weather and nature. Since the 1950’s Africa has lost large amounts of arable land. Significant rainfall, drought, desertification and deforestation, famine and floods are all anticipated. Food shortages have been caused by conflicts in the past. In Africa, as elsewhere, poverty is concentrated in rural areas. Three out of four rural people live in poverty. There is a strong correlation between displacement and food insecurity. These circumstances have led to large-scale migration and conflict, which can only increase if action is not taken.

Africa has always known migration because of its pastoral nature. Historically migration was beneficial to all involved. Today migration is much more complex because Africa is overwhelmed by environmental degradation, climate change and conflict. Lake Chad is a case in point. The countries of the Lake Chad Basin are Cameroon, Niger, Nigeria and Chad. In the past 45 years, Lake Chad has shrunk by 95%. The dying of Lake Chad Lake is illustrative of the nexus between climate change and migration. The Lake and its surroundings had sustained the livelihoods of those who lived in the region. Agricultural production was reduced and fishing was affected.  Between 2008 and 2015, more than 2.2 million people migrated from the area. Today there are more than 1,000,000 refugees in Uganda alone. When there is environmental degradation, conflict arises. These environmental factors contributed to the rise of the extremist terrorist group Boku Haram. Terrorism now flourishes in the Lake Chad region and recently cholera has been spreading. 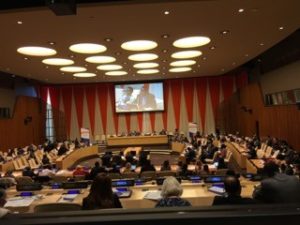 Climate change affects women and girls directly and particularly because women’s responsibilities are so closely related to weather and climate change.  Women in Africa are largely involved in agricultural work. They are also the ones who must seek and provide food and water for their families, and food insecurity remains high. They must care for the sick. Women and girls become vulnerable, whether they remain in these unstable conditions, or whether they must migrate. In either case, they can fall into the hands of human traffickers and smugglers; be kidnapped; or otherwise subjected to violence and sexual abuse; or they can be killed.

The African leaders have committed themselves to 2020 without conflict.  But as one panelist pointed out, “Despite the efforts, reality is quite stubborn”.