The United Nations Educational, Scientific and Cultural Organization (UNESCO) is based in Paris, meaning that the SI UN Representatives there primarily focus on education. However, because UNESCO and the NGO Committee there organise periodic meetings on various issues, SI UN Representatives often adapt their workload in order to engage with the subjects of those meetings. This edition of ‘Your Voice at the UN’, follows the recent work of SI’s UN Representatives in Paris; Marie-Christine Gries, Rina Dupriet and Evelyne Para.

News from the 40th Session of the UNESCO General Conference, 12-27 November.

“This 40th conference, which reflected the reinvigoration of UNESCO, satisfied the majority of the participating states. An exceptional number of heads of state and ministers attended.  UNESCO received confirmation from the Secretary-General of the United Nations, who was present at the opening session, of its leading role in coordinating the activities of the United Nations centers in this field.

An international commission of high-level experts was established under the leadership of Mrs. Sahle-Work Zewde, President of Ethiopia. The work of this commission aims at a World Report on the future of Education for November 2021.

In the field of science, UNESCO will lead a project to create a global standard-setting instrument on open science that will be developed in the next two years. This text will be proposed to states at the next general conference (2021). The aim is to lay the basis for a universal right to scientific knowledge. These actions will help boost research worldwide by facilitating communication and exchanges between researchers and graduate teachers.

The General Conference also gave permission to UNESCO to develop the first standard-setting instrument on the ethics of Artificial Intelligence (see the following report from Rina).

Youth was particularly integrated into the work of this conference: selected young people (18-25 years old) from many countries held a forum throughout the conference on the theme: “Re- Generation – rethinking multilateralism with young actors for change “. They were admitted to debate directly with a panel of heads of state to present their vision of youth participation in decision-making in the contemporary world. They showed their particular sensitivity to the challenges posed by climate and asked the leaders for efforts in favour of education and for technology to be used to serve the interests of people and their development. Their commitment was welcomed by the leaders, but nevertheless the recommendations they proposed for an opportunity to participate in the decision-making bodies of UNESCO have not been translated into resolutions by states.

The Future of Artificial Intelligence 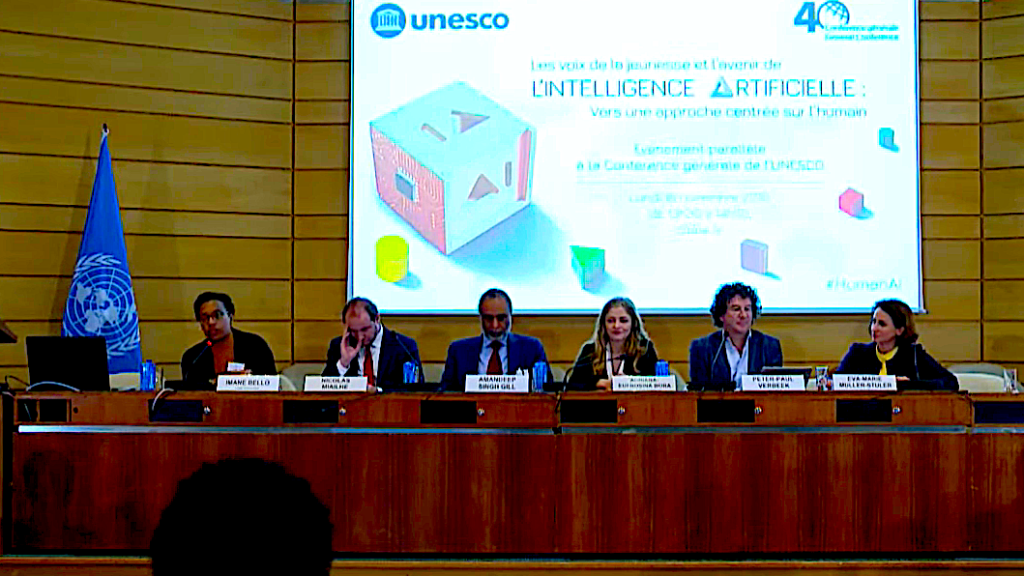 During the 40th Session of the UNESCO General Conference, Rina and Evelyne attended the event ‘Youth Voices and the Future of Artificial Intelligence: Towards a Human-Centred Approach’. Following the event, Rina remarked:

“Artificial Intelligence could help humanity overcome many of the serious problems it faces. But at the same time, A.I. presents a series of complex challenges, particularly in terms of ethics, human rights, and security…UNESCO has a responsibility to lead a universal and enlightened debate, not a technical debate but an ethical one, in order to enter this new era with our eyes wide open and without sacrificing our values to make it possible. Member States should aim to establish a global foundation of ethical principles in respect of A.I.”

Click here to read Rina’s blog from this event.

On Friday 15 November, Evelyne took part in an event devoted to ‘Education for Sustainable Development and Climate Action’, within the framework of the 40th session of the UNESCO General Conference.

“The first half of this event was dedicated to the 2019 UNESCO-Japan Prize on Education for Sustainable Development (ESD), which honours outstanding projects by individuals, institutions and organisations related to ESD.  (Watch this video: https://youtu.be/TpaCMbLRXBM to learn about the winning projects). 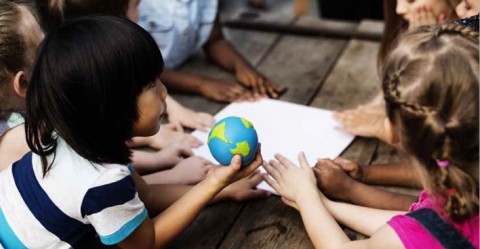 The second half of the event allowed the participants to discuss the role of education, knowledge and youth empowerment in climate action, and showcase some good practices of how young people are already active for the climate around the world, both inside and outside the classroom. The discussion included examples from the UNESCO Associated Schools Network. It was an opportunity to recall how UNESCO and its partners contribute to the measuring of progress towards Target 4.7 of Sustainable Development Goal 4 (Quality Education) with regular reports, news, analysis and publications.

Education for Sustainable Development is not an ‘extra’ but rather an integral part of any strategy to combat the effects of climate change. It acts to raise awareness and change behaviours and attitudes and enables people to make informed decisions about their lives”. 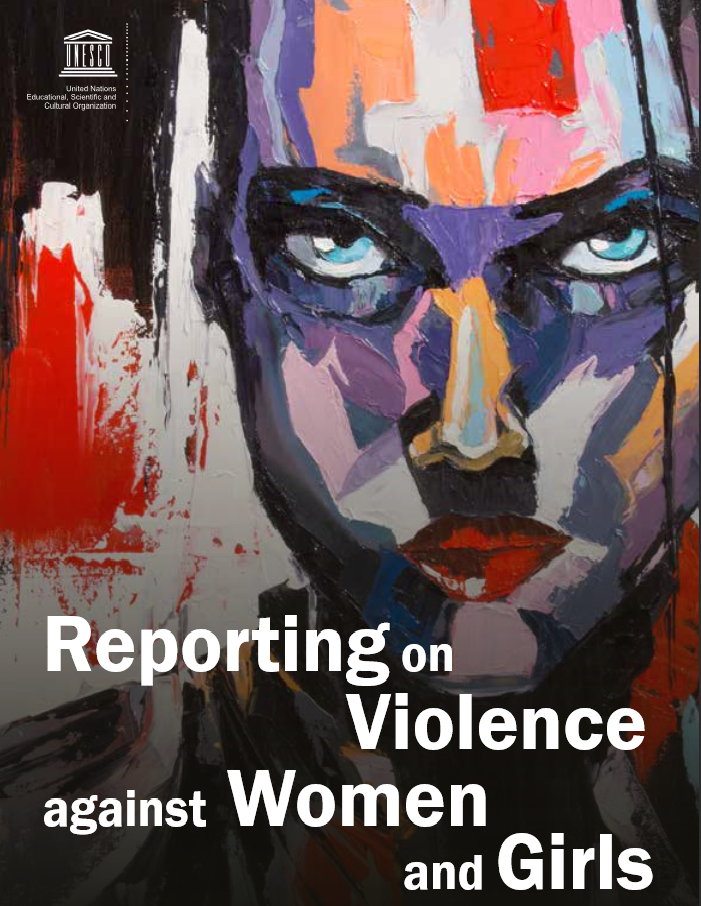 1. ‘Reporting on Violence Against Women and Girls: A Handbook for Journalists’

On Thursday, November 21, Marie-Christine attended the launch of UNESCO’s handbook for journalists which focuses on the formulation and content of messages to report on violence against women and girls (click the image to view the handbook). The launch of this publication took place  in the presence of many journalists, representatives of state delegations and NGOs. Marie-Christine reported on the importance of the issues and techniques raised in the handbook.

“The language used in all reporting must reinforce a balanced and objective media coverage of the acts of violence, which today are highly underestimated.”

UNESCO’s Atlas of Girls’ and Women’s Right to Education. Click the image to visit the webpage.

An overview written by Rina.

“The ‘Online Atlas of Girl’s and Women’s Right to Education’ is developed as part of ‘Her Education, our Future’, UNESCO’s initiative to accelerate action for girl’s and women’s education by leveraging political and financial commitments.

Many girls and women cannot exercise their right to education due to gender inequality and discrimination practices. This Atlas covers 196 countries. The ambition is to enrich and continue to update the Atlas until 2030. The Atlas uses 12 indicators to capture factors in national legal framework that either strengthen or act as barriers to the right to education of girls and women.

Aim: To improve national legal frameworks, reinforcing equality in education for girls and women, and contribute to achieving the Sustainable Development Goals (SDGs), notably target 4.5, which explicitly requires States to eliminate gender disparities in education and ensure equal access to all levels by 2030.

Country Profiles: This Atlas provides information for each country in a visual and easily understood format. For each indicator, a score on a scale of 1 (lowest) to 5 (highest) is attributed based on the analysis of the legal provisions in force in the country. The graphic presentation of the scores is accompanied by explanatory comments.” Click the image to view the webpage. 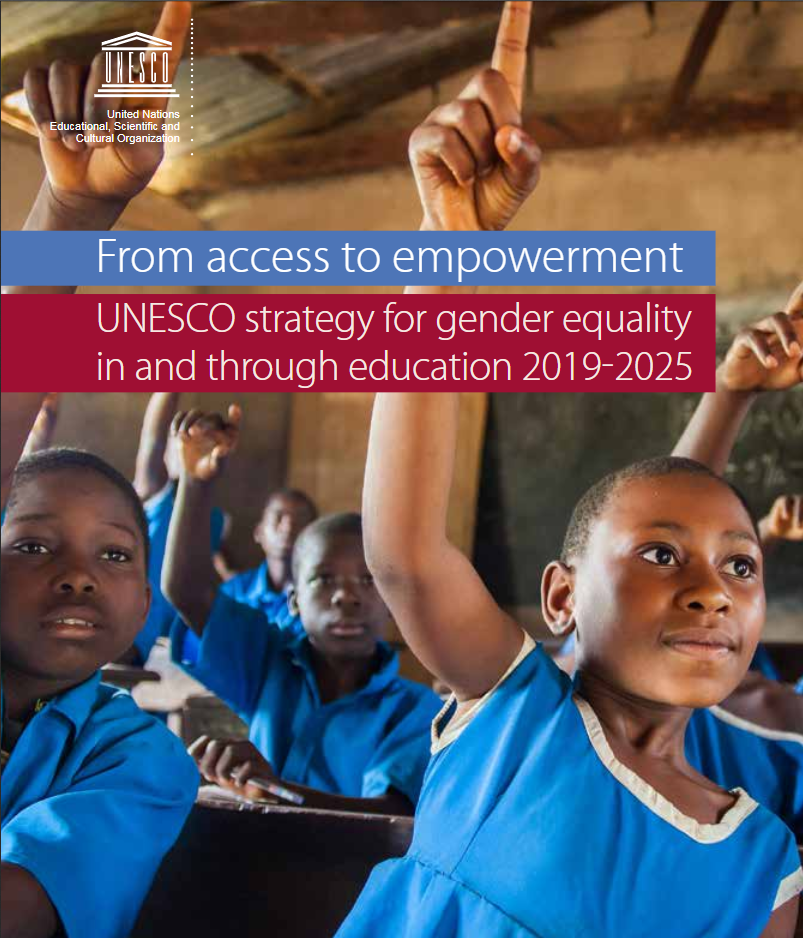 The ‘UNESCO Strategy for Gender Equality in and Through Education 2019-2025′ has recently been made available and can be accessed here. The strategy calls for better legal policies, and planning frameworks to advance rights. Education is a powerful driver for human capital, economic growth, social cohesion, cultural transformation, environmental sustainability, and peaceful coexistence. Hence, the Director-General for Education has proposed that each Member State, and each NGO, implement the UNESCO strategy and commit to better coordination across UNESCO.

For more information about the report, click here to read Rina’s blog from the UNESCO panel discussion which first introduced the report.