“The United Nations World Refugee Day is celebrated on 20 June every year. The world celebrates so that we do not forget the needs and contributions of those millions of people who have fled their countries because of conflict or persecution, and are in fear of returning.

In honour of World Refugee Day, 2018, Secretary-General António Guitteres began his remarks by asking the question: “What would you do if you were forced to leave your home?”

The world is witnessing the highest levels of displacement on record. By the end of 2016, 65.6 million people around the world had been forced from their homes by conflict and persecution. The figure now stands at 68 million. Amongst them, 22.5 million are refugees and more than half are under the age of 18 years (Source: United Nations High Commission on Refugees).

The office of the United Nations High Commissioner for Refugees (UNHCR) was established in 1950 to help the millions of Europeans who had had fled or lost their homes in the aftermath of the Second World War. It was created by the UN General Assembly and was given a three-year mandate to complete its work and then disband.

The 1951 United Nations Convention relating to the Status of Refugees.

On July 28, 1951, this Convention, establishing the legal foundation of helping refugees and the basic statute guiding UNHCR’s work, was adopted. The Refugee Convention builds on Article 14 of the 1948 Universal Declaration of Human Rights, which recognized the right of persons to seek asylum from persecution in other countries.

The Refugee Convention defines a refugee as:
A person who has fled his country because of a well-founded fear of persecution on one of five grounds: race, religion, nationality, membership of a particular social group or political opinion.

According to this principle, a refugee (with certain security-based exceptions) should not be returned to a country where he or she faces serious threats to his or her life or freedom. This principle of non-refoulement is the cornerstone of the 1951 Convention.

Once the Refugee Convention was adopted, the work of the UNHCR had to continue. Its primary purpose is to safeguard the rights and well-being of refugees. The agency is mandated to lead and coordinate international action to protect refugees and resolve refugee problems worldwide. The UN Refugee Agency has its Headquarters in Geneva, however, about 89 percent of staff are working in the field.

Refugees in the 21st Century 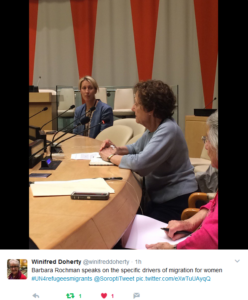 Natural disasters (sometimes due to climate change), can also force people to seek refuge in other countries. Such disasters – floods, earthquakes, hurricanes, and mudslides – are increasing in frequency and intensity. Slow-onset disasters such as desertification or sea level rise can cause displacement.

Gang violence, grinding poverty, and food insecurity, also cause people to move, often in desperate circumstances. As a result, there are not only more refugees but also more people who may not fit the definition of refugees and are nonetheless in extremely vulnerable situations and in need of protection.

At the same time, the political climate in many parts of the world has turned against refugees and migrants and xenophobia has risen. More and more countries are restricting the admission of refugees, asylum seekers and irregular migrants and using draconian measures to repel or detain him.

We must ask that the UN Member States meet their responsibilities to refugees and migrants and recognize the human rights of all”.

Secretary-General’s Message: “What would you do if you were forced to leave your home? Today, more than 68 million people around the world are refugees or internally displaced as a result of conflict or persecution. That is equivalent to the population of the world’s 20th largest country. Last year, someone was displaced every two seconds. Mostly, in poorer countries. On World Refugee Day, we must all think about what more we can we do to help. The answer begins with unity and solidarity. I am deeply concerned to see more and more situations where refugees are not receiving the protection they need and to which they are entitled. We need to re-establish the integrity of the international refugee protection regime. In today’s world, no community or country providing safe refuge to people fleeing war or persecution should be alone and unsupported. We stand together, or we fail. This year, a Global Compact on Refugees will be presented to the UN General Assembly. It offers a way forward and recognizes the contributions that refugees make to the societies hosting them. As long as there are wars and persecution, there will be refugees. On World Refugee Day, I ask you to remember them. Their story is one of resilience, perseverance and courage. Ours must be of solidarity, compassion and action.” António Guterres, visit HERE to find out more.

Lead image courtesy of UNICEF and Back to School Syria.