According to the ICPR World Female Imprisonment List, which compiled the latest data available in July 2015, more than 700,000 women and girls are held in penal institutions throughout the world. The ICPR data shows that the number of women and girls in prison has increased by about 50 per cent since the year 2000. Source: Global Prison Trends 2016.

“Following the publication of the report ‘Transforming Lives’ with the Prison Reform Trust (PRT) in December 2014, Soroptimist clubs across the UK and the UK Programme Action Committee (UKPAC) have been involved in disseminating the findings, and encouraging responsible authorities to take action to address the recommendations within it. The intention is to inspire changes in the way women’s minor offending is addressed across the UK; focusing more on community-based solutions with an emphasis on diversion out of the criminal justice system, and on appropriate help for women in addressing the causes of offending.

Following the adoption of the United Nations Rules for the Treatment of Women Prisoners and Non-custodial Measures for Women Offenders (the Bangkok Rules), there has been growing recognition of the need for a distinctive approach to women in the broader criminal justice system. Trauma-informed approaches, which recognise that women have in many cases suffered from violence or abuse, are being increasingly recognised as essential to the humane and effective assessment and treatment of women in the criminal justice system.

Soroptimists have been involved in work in each legal administration, (England and Wales; Northern Ireland; Scotland), with early success in helping to dissuade the Scottish Government from building a new prison and subsequent involvement with a review of the current system.

The privatisation of the probation service in England and Wales has led to disruption of community services available to women.  Soroptimists have engaged in discussions regarding this, and in trying to ensure that help continues to be readily available. In Wales, Scotland and some parts of England, the Integrated Offender Management (IOM) scheme is being rolled out. The IOM approach is vital in bringing agencies together to maximise use of collective resources and to tackle crime and re-offending in a consistent way; at the same time allowing for flexibility depending on the type of offender, where they live, and the reasons they offend. The plan involves many agencies through multi-agency groups to have consistent arrangements across services and to reduce re-offending.

The HM Inspectorate of Probation (England and Wales) is conducting a ‘Thematic Inspection of the Work with Women Offenders’. UKPAC has representation on the reference group, in addition, a number of clubs and the PRT have put in separate reports on the facilities that are available, or unavailable, in defined areas.

Concerns raised by the HM Inspectorate of Probation:

Concentration on high population areas with an apparent omission of rural areas;

The lack of stable finances for Women’s Centres;

Little progress on alternatives to prison;

Sentencers unaware of the facilities available in their areas.

Concerns detailed to the UK Home Office by UKPAC:

Women are sometimes given tents to live in and sleeping bags[i]. Sleeping bags can be used to find a floor space in a hostel (often mixed gender) where they do not feel safe. This failure to find suitable housing for women who offend leads to more crime, more victims and further costly imprisonment. In addition inadequate access to benefits, particularly under the new rules, compounds the problems faced by the women and their families. The National Offender Management Service observes that “The majority of women receiving custodial sentences are subject to short sentences of six months or less, which is long enough to lose accommodation but often too short to gain another home.” [ii]

Two-thirds of imprisoned women are mothers of children under the age of 18 years[iii]. They are far more likely than men to be the primary carer for their children and are less likely to have a partner at home caring for their children whilst they are in prison[iv]. This leads to only 5% of children of a mother in prison remaining in the family home during her imprisonment[v].

The response from the relevant Minister stated the department’s commitment to improving the situation but, given the current UK election, no further progress has been made.

‘A Fair Cop’, a recent discussion paper from the PRT,  has underlined a number of continuing concerns on which we hope to make progress after the general election. Read the full paper HERE.” 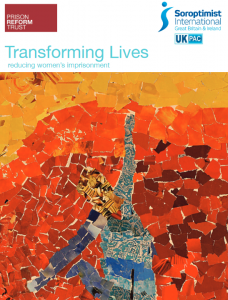 A wealth of information gathered by 139 Soroptimists clubs across the UK went into the report Transforming Lives, intended to spur national and local governments into action. The report recommended the development in England and Wales of a cross-government strategy for women’s justice, led by the Minister for Female Offenders. Recommendations for improvements to the oversight of women’s justice in Scotland and Northern Ireland were also highlighted. The recommendations in the report were developed by the Prison Reform Trust (PRT) to reflect the evidence gathered by Soroptimists. They included improved training, protocols and guidance for those working in criminal justice agencies to ensure appropriate responses to women offenders, greater regard to the needs of children, piloting of problem-solving courts for women, the production of directories of local women’s services for use by probation and court services, and a roll-out of co-ordinated local multi-agency interventions. View the full report HERE.