Blog by SI Advocacy Advisor, Pat Black, following her virtual attendance at the UN High-Level Panel, ‘Accelerating Implementation of the 2030 Agenda through Water, Sanitation and Climate Action’, co-organised by the Permanent Missions of Canada, Finland, Hungary, Japan, Kenya, Netherlands, Portugal, Singapore, Tajikistan and the Department of Economic and Social Affairs, with the support of UN-Water..

“There were approximately 800 participants viewing and listening to 19 high-level experts speaking about various aspects of water particularly in relation to their own countries. The objective of the session was outlined as:

“Recognising the need to reinvigorate action, Heads of State and Government stressed in the Political Declaration of the 2019 SDG Summit the urgent need for concerted, accelerated action by all stakeholders at all levels to achieve the 2030 Agenda, including SDG 6 on water and sanitation and SDG 13 on climate action.  Subsequently, on 22 January 2020, the UN Secretary General launched the Decade of Action calling on all sectors of society to mobilise action at three levels: global action to secure greater leadership, more resources and smarter solutions for the Sustainable Development Goals; local action embedding the needed transitions in policies, budgets, institutions and regulatory frameworks of governments, cities and local authorities; action by youth, civil society, the media, the private sector, unions, academia and other stakeholders, to generate an unstoppable movement pushing for the required transformations.”

The speakers covered a wide range of issues related to water and climate change with the session divided into two parts.

In the first part, each contributing country provided a perspective from the work being done in their country.  Amongst those were:

Karina Gould, Minister of International Development, Canada said that the impact of COVID–19 demonstrates the importance of water.  The lack of water leaves countries vulnerable. She felt that water was the key to climate action so Canada was investing in developing countries, looking at nature-based solutions. She added that if Canada were to be elected to the Security Council they would see climate change as a major priority to achieving peace and security.

Krista Mikkonen, Minister of the Environment and Climate Change for Finland, had recorded a short video in which she identified that climate change amplified inequalities. She expressed concern about the lack of handwashing facilities for many people, asking why so many are left behind in accessing water and sanitation facilities.  She drew attention especially to women and girls.

Lazarus O. Amayo, Permanent Representative of Kenya, drew attention to the challenges facing the Island States which were very vulnerable to the rises in sea level.  He said that they were currently bearing the brunt of climate change, a predicament which is being highlighted at the upcoming Oceans Conference.  He felt that innovation and science were fundamental in responding to their needs.

Burhan Gafoor, Permanent Representative of Singapore, supported this view, putting emphasis on the role of technology.  He described how 30% of Singapore’s water supply is now from desalination plants.  He stated that there needs to be emphasis on recycling wastewater and there should be major investment in the infrastructure, ensuring that it is energy efficient as well as providing correct water pricing so everyone was aware of the value. 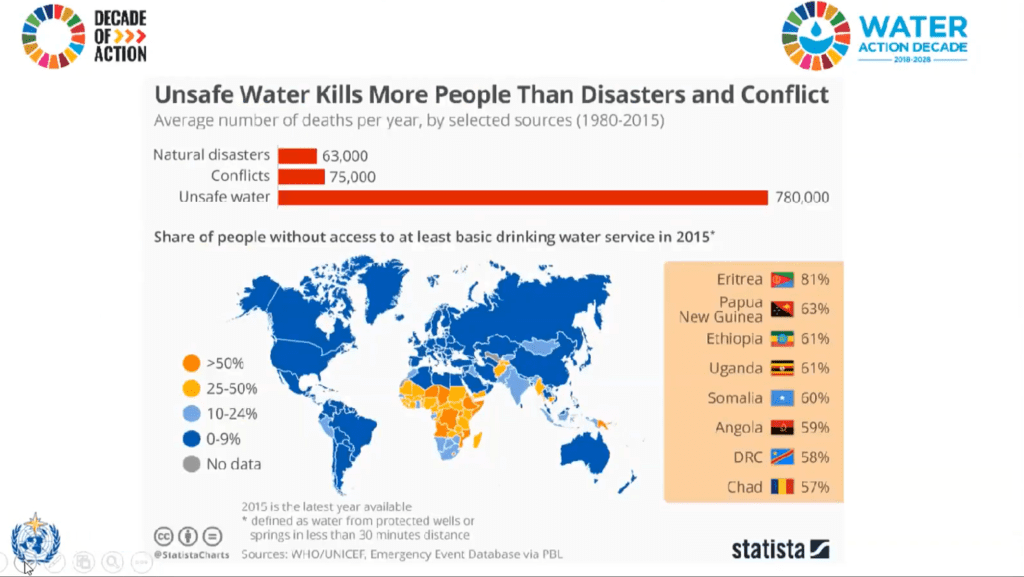 The second session was an interactive dialogue with many experts outlining aspects of water management from their viewpoint.  Petterei Taalas, Secretary-General of the World Meteorological Organisation, provided a detailed view of climate change and its effect on the distribution of water around the globe.  The changes in temperature around the globe are having a massive impact on land-based water as well as changing the ocean levels and thereby affecting many of the Island States.

Peter Kovacs, Vice-Chair of the Bureau of UNECE Water Convention discussed the impact of trans boundary water systems, describing some of the major issues in Europe where major rivers run through several countries leading to issues of abstraction as well as pollution. Rivers which contribute to water across several countries need a multilateral approach and cooperation if they are to be utilised effectively.

Mr. Gilbert F. Houngbo, UN-Water Chair and President of the International Fund for Agricultural Development suggested that aiming at a Global Acceleration Framework for SDG 6 was critical and this will probably be launched at the High-Level Political Forum in July.  He highlighted 5 main points in relation to the provision of clean accessible water: sufficient financing; ensuring that relevant information was made widely known; there is clearly a need for capacity development especially in the management of water resources; innovation will play a significant part in the development of water and sanitation resources over coming years and the governance of water systems especially where cross-boundary situations have to be taken account of. He pointed out that this year World Toilet Day on 19 November would be related to water, sanitation and climate change, and urged everyone to play a part.

The subject covered was a huge one, with an amazing number of expert contributions, and I am sure each of the contributors could have extended their presentations.  Covered here is just a flavour of the importance of water and its relationship with improved sanitation as well as the impact of climate change.  The whole event was packed full of information and underlined the importance of water and sanitation at a time of climate change within the context of a global pandemic which has to be controlled through washing hands.”