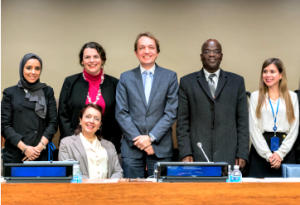 The 55th Commission for Social Development (CSocD) was held at the United Nations in New York from 1 February to 10 February, 2017.  It is one of the oldest ECOSOC functional commissions and it is the first to meet each year.  Last year it was also the first commission to meet after the adoption of the 2030 Agenda for Sustainable Development and all eyes were on it for leadership.  In that regard, it determined to support the thematic reviews of the HLPF. The commission spans a two year cycle.  The first year of that cycle (this year) is for strategy which is reflected in this year’s priority theme which is “Strategies for eradicating poverty to achieve sustainable development for all.”  The second year (2018) will be for policy. 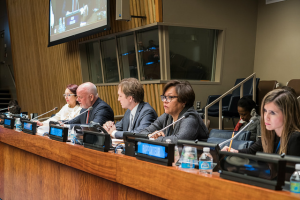 As we approached this year’s commission, civil society was a bit concerned because a chair for the commission wasn’t designated until just two weeks before it began.  However, we were very pleasantly surprised as the newly named chair, Mr. Philipp Charwath of Austria, was very approachable and open to civil society organizations. 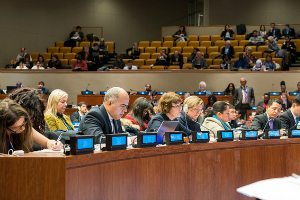 In his opening address, Mr. Charwath reiterated the commission’s mandate to discuss, evaluate, and make policy recommendations in the field of social development.  Whilst this mandate predates the SDGs, it is even more relevant today.  He recognized that in order to end poverty, one must have effective policies for youth (and the most vulnerable within that group, namely girls and young women, disabled youth, and indigenous and refugee youth), persons with disabilities, and older persons, he stressed that policies need to target families with children to end the “intergenerational transmission of poverty.”  In addition to the general discussions there would be panel discussions on the emerging issue:  “Promoting Integrated Policies for Poverty Eradication: Youth Development in the 2030 Agenda.”

The President of ECOSOC, Mr. Frederick Musiiwa Makamure Shava, spoke about the Commission’s essential role in the implementation of the 2030 Agenda.  He stated that it is becoming extremely difficult to reach people who remain in extreme poverty as they are marginalized, live in fragile socio-economic conditions and live in remote areas.  Improvements are often temporary.  This is why strategies and policies are so important.

The Assistant Secretary General of DESA read a statement from Secretary General Guterres.  That statement noted that the adoption of the 2030 Agenda set the bar high with a universal and indivisible set of goals that aim to leave no one behind.  The Secretary General’s (SG) remarks noted that these are challenging times and conflicts are reversing decades of hard won gains in social well-being and widening the gap between the rich and the poor.  Even in peaceful societies, prosperity has not been shared.  The SG is committed to integrating the UNs work in peace, sustainable development, and human rights; and to a “whole of society” approach that includes public and private partnerships. He believes that we need a new set of tools and policies tailored to the national context.  We need to give top priority to gender equality and the empowerment of women as sustainable development is a way to ensure peace.

Daniel Perell, Chair of the NGO Committee for Social Development (NGO CSoCD) spoke on the outcome of the Civil Society Forum that was held durin the two days preceding the Commission.  He spoke about our living in an interconnected world where our “moral horizon” is broadening and leading to a new sense of urgency.  He asked “How can broad based and equitable prosperity most effectively, efficiently, and lastingly be established around the globe?”  In answer to this, the NGO CSocD has highlighted social protection as a promising strategy for pursing the eradication of poverty and it is outlined in their Civil Society Declaration which was presented to the Commission and asked for the adoption of this resolution at a future Commission.  Social protection, including floors, is seen as a fundamental tool in alleviating poverty, reducing inequality, and building inclusive societies.  Civil society brings the human heart and face into the room.  Without the human element, progress will not be sustainable.  We need to find ways to integrate the human and the technical; efficiency and compassion.

Civil society significantly increased its participation in the Commission this year.  For the first time, there were more requests for side events than could physically be accommodated.

A representative from the ECOSOC Youth Forum reported on its outcome.  The Youth Forum preceded the Commission.  As she reported their key outcomes by SDG, it was interesting to note that the youth were keen to involve other segments of society such as intergenerational partnerships and indigenous people.  They asked for SDG 1 – non-formal education, SDG 2 – indigenous knowledge, SDG 3 – youth friendly national health plans, SDG – 5 gender equality (with partnerships that include young men and boys), SDG – 9 infrastructure that is responsive to the environment, and SDG 14 – a timeline for the global treaty on plastics and the inclusion of landlocked countries as all countries are dependent on the oceans.  The Youth Forum included Regional debates which yielded the following key issues:  Africa – unemployment, Europe/North America – participation in decision making, Latin America and the Caribbean – the economy, Asia/Pacific – climate and the oceans, and the Arab working group – peace.

Peter Thompson, President of the General Assembly (PGA) reiterated the role of the Commission to promote people centered and inclusive approaches to social development including through the Copenhagen Declaration.  “The Commission lays the groundwork for the accomplishment of the 2030 Agenda and plays a critical role.”

These presentations were followed by general discussions.

High-level panel discussion on the priority theme “Strategies for eradicating poverty to achieve sustainable development for all.”

High level panel discussion on “Leaving no one behind: poverty and disability”

During this period, the Commission allowed space for Civil Society Organizations to make Oral Statements.  This is significant as they were recorded and are now part of the official record of the 55th Commission for Social Development. http://webtv.un.org/meetings-events/watch/10th-meeting-of-the-commission-for-social-development-fifty-fifth-session-1-10-february-2017-/5314551099001

Concurrent with these formal and informal meetings were over 50 side events.  These events featured successful grassroots projects, national efforts, and specific strategies to eradicate poverty.

The closing session of the Commission included the adoption of resolutions to be submitted to ECOSOC.

The resolution on Policies and programmes involving youth stressed that the achievement of the SDGs requires the full and effective participation of youth, youth-led and youth-focused organizations and other civil society organizations at the local, national, regional and international levels.  It emphasized the need to empower youth in order to achieve sustainable development. It acknowledged the important link between migration and development and that it brings both opportunities and challenges.  It recognized the responsibility of States to promote and protect the human rights and fundamental freedoms of all migrants…especially those of women, young people and children.  It called for increased coordination and collaboration among UN entities with 19 points under this resolution.

The resolution on “Social Dimensions of the New Partnership for Africa’s Development” reaffirmed the resolution containing the Addis Ababa Action Agenda of the Third International Conference on Financing for Development and it acknowledged the importance of supporting Agenda 2063 of the African Union and the programme of the New Partnership for Africa’s Development.  The resolution is quite robust in general.  With regard to women, it noted concern regarding the continued prevalence of child, early and forced marriage, as well as violence and other harmful practices against children, including female genital mutilation.

In his closing statement, the Chair wondered whether the Commission could not do even better in feeding the rich input of the Commission into the broader work of the UN and he wondered how we can best make use of its information, experience and lessons learned for effective policy guidance?

As you can see, it was a very informative and enlightening Commission.  I hope that this peaked your interest and that you will consider participating in some way next year – either in person or using the UN WebTV.  Next year, we expect the Chair of the 56th Commission will be Iceland.  That is very good news as Iceland has been very forward thinking with regard to social development issues”.