Owing to the cancellation of the Commission on the Status of Women earlier this year, the Secretary-General’s annual consultation with women’s civil society was postponed. However, on 31 August 2020, a virtual Townhall Meeting was held between UN Secretary-General, António Guterres, and a virtual audience of women’s civil society actors, with UN Women Executive Director, Phumzile Mlambo-Ngcuka as the moderator.

Upon listening to the participants’ observations, it became quite clear, that Mlambo-Ngcuka’s warning that the global community had to be on “high alert” as we were “far from fulfilling the promise of Beijing” was justified. Women’s advocates continue to be overwhelmed by having to fight against major attacks on their human rights and we are seeing decades of hard-fought gains slipping away.

UN Secretary-General António Guterres assured the audience that, while the COVID-19 pandemic is at the top of the UN’s concerns, the UN would not be distracted from other goals such as gender equality. This is a fortuitous move as the pandemic is already viewed as making the challenges facing women and girls “more acute”. The pandemic is having a disproportionate and devastating social and economic impact on women and girls including already reversing decades of fragile progress and deepening existing inequalities regarding gender inequality. It is also exposing and exacerbating the considerable hurdles women faced if they wanted to achieve their rights or fulfill their potential.  Guterres warned that, without a concerted response, we risk losing a generation of gains.

UN Secretary-General António Guterres and Phumzile Mlambo-Ngcuka gave the audience examples of how the pandemic had already impacted women or girls. For example, what was described as skyrocketing levels of gender-related violence placing the lives of many more women and girls at risk. It does not help matters that many women continue to be confined with their abusers, whilst resources and support services are redirected. 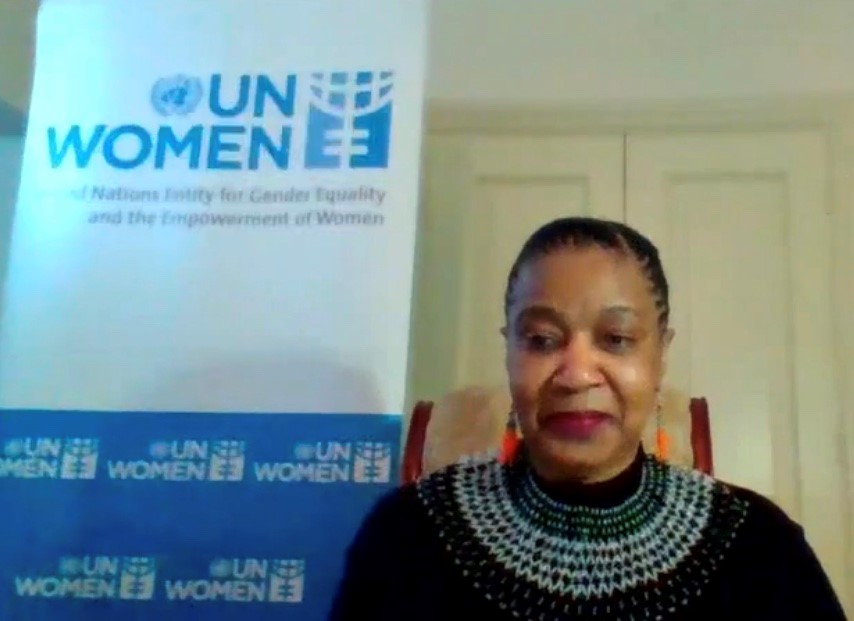 The digital divide was also described as being a “sure way” of keeping women and girls from pursuing their education which, in turn, would not only leave them further behind but also reverse the modest but important gains that had been made in educating women and girls. It was also observed that the Ebola outbreak in West Africa served as an example of what happened when teenage girls left school; they might never return. Without an education, women and girls could continue to be subjected to harmful practices. With millions of teenage girls around the world staying out of school, there was also a risk that any one of them would become another statistic regarding the increase of teenage pregnancies in some countries. Each of these issues was described as being a crisis within a crisis, or as one speaker put it “a pandemic within a pandemic”. Moreover, any progress which has been lost is anticipated to take years, even generations, to recover.

It was also observed that without further interventions, women would continue to make up 70-90 percent of the frontline response to COVID-19, taking care of the needs of their families and communities, and facing increased risk of being exposed to COVID-19.  Essential workers’ salaries and working conditions would continue to fail to reflect the lifesaving roles occupied and additionally, they would continue to be precluded from participating in decision-making roles. For example, it was acknowledged that whilst women leaders were extremely effective, less than eight percent of Heads of State, 25 percent of parliamentarians, and less than 30 percent of decision-makers on health care were women. Bias and discrimination was observed to be harming us all.

However, Guterres and the United Nations had a plan. Whilst acknowledging that we are going through difficult times which nobody expected to end soon, it was also observed that we could not go back to the failed policies that resulted in the fragility we now see around us – in healthcare systems, in social protection, and in access to justice. This has to be the time to rebuild more equal, inclusive, and resilient societies, using the 2030 Agenda for Sustainable Development as our roadmap.

Guterres also observed that protecting the rights of women and girls during this time should be considered a top priority for the United Nations and as such, called on governments to take concrete action to put women and girls – their inclusion, representation, rights, social and economic outcomes, and protection – at the centre of all efforts to tackle and recover from the COVID-19 pandemic. Guterres was also determined to advance women’s priorities in the future in order to ensure their equal rights and participation in the peace and security agenda, on climate change, on building inclusive economies, and in reducing and eliminating the digital divide, so that women have an equal role in leadership and designing the technologies of the future.

As part of that effort, Guterres also urged governments to stop the redirection of health funding and services, as well as to make sure that any health systems meet the needs and realities of women and girls, including prioritising and funding primary health care and Universal Health Coverage. He also urged governments to prioritise protecting women from gender-based violence in their national COVID-19 plans. 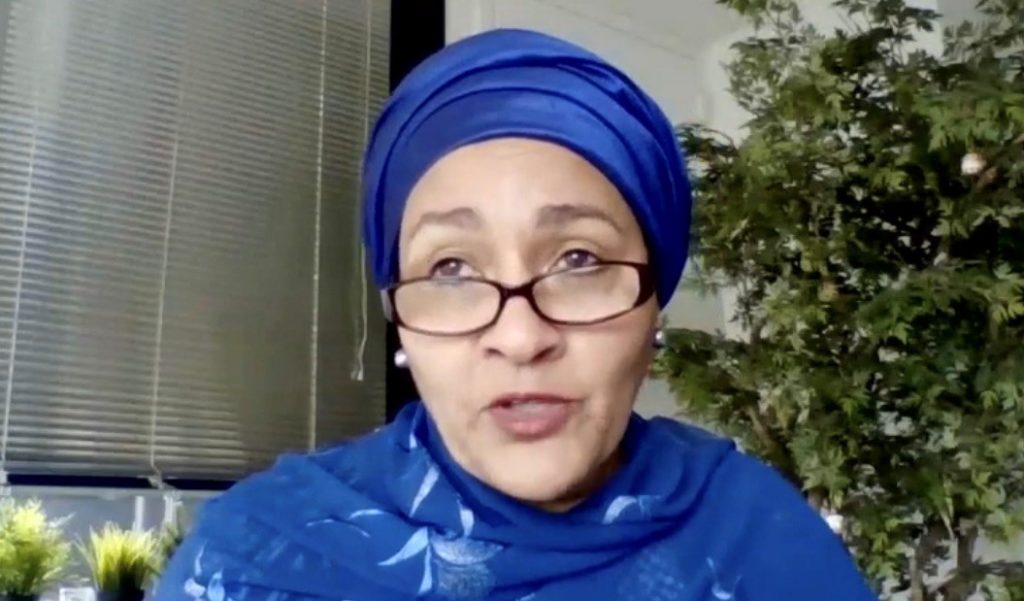 Guterres saw the second phase of this response as mitigating the social and economic impact of the crisis on women or girls by granting benefits like health insurance, paid sick leave, paid child and family care and paid parental leave, as these should not be seen as luxuries but as vital to the functioning of our societies. Such efforts are to include putting money into the hands of women who work in both the formal and informal economies. Cash transfers, credits and loans are to be targeted at women, to mitigate the immediate impact of job losses and increased caring responsibilities. In addition, as governments inject stimulus and other funds to get their economies back to work, they are also urged to expand social safety nets and recognise the value of the invisible and unpaid care work of women or girls. In doing so, this will address the vulnerabilities women experience, ensure women’s central role in economic life, and in the long term, contribute to sustainable development and more inclusive and resilient economies.

In the final phase, the goal will be to build a better future in which the world can take the opportunity of an economic reset to ensure the rights to life, dignity, and security for everyone. Moreover, as the pandemic has shown the world who is doing the work that really matters, including nurses, teachers and care workers, we might end the inequities of unpaid care work and create new economic models that work for everyone. “Recovering better” has to expand its reach beyond governments. The private sector, academia, institutions of all kinds, and civil society has to be fully engaged. In addition, it is essential to protect and expand civic space so that civil society organisations can play their full part.

Guterres shared his belief that the United Nations and the global community need to create equal numbers of women at all levels of decision making in order to make the world more effective, efficient, and resilient to sudden shocks. Guterres approved the use of quotas and temporary special measures to remove the biases and obstacles to women’s equal participation, as, without these quotas or measures, Guterres believes that women would never realise their full rights, and societies would never reap the benefits of equality and inclusion.

Guterres observed that we live in a time of growing nationalism and populism and, if we are to meet today’s global challenges, from the climate crisis to growing inequality and the digital divide, we must join together, rejecting sexist and ageist stereotypes that prevent women – and men – from realising our full humanity. Guterres stated that the world is experiencing the global spread of what he described as a “social disease” in the form of racism or white supremacy. Moreover, as a fundamental priority, we must fight against racism and white supremacy’s ideology, arguments, and organisation, whilst addressing the drivers behind such beliefs and assuring that every person feels that their identities are respected.

Amina Mohammed, the Deputy Secretary-General of the United Nations, was also a speaker at this event. She observed that, without guaranteeing equality, inclusion, the elimination of the digital divide, and obtaining relevant data, the global community would find itself “lifting heavier and heavier constituencies of poor people than we would otherwise wish for.” Ms. Mohammed also urged the audience to remember that any communication had to consist of two-way traffic in which members of women’s civil society and the United Nations community talked to, as well as listened to each other.

At the end of Guterres’ speech, he told the audience that he wanted to reassure the all, and women everywhere, that the United Nations stood with them and would be working for them every day, around the world. He also observed that, as it marks its 75th anniversary, the United Nations needs women and girls’ voices and engagement more than ever.”