“Migration is nothing new on our planet.  Earliest human migrations across continents began two million years ago. Homo sapiens left from Africa about 100,000 years ago.  About 60,000 years ago they migrated across Asia and continued to arrive on new continents and islands.  In those days, there was no television or internet to record their stories.

Today we have images, and they are devastating.  Migrants being beaten back at borders, others barely saved from drowning, tent cities springing up, children not in school, violence breaking out in countries receiving migrants, and the unforgettable image of a sweet-looking toddler lying dead on a pristine Mediterranean beach.

The current crisis in migration, the largest since World War II, has nothing safe, orderly or regular about it. More than 65 million people have been displaced from their homes, perhaps 21 million of them refugees and in the process, their human rights are often ignored.

At the United Nations in New York, a Declaration on Refugees and Migrants was agreed to by all 193 UN Member States in September 2016.  The New York Declaration is a political document setting forth the states’ commitments to launch a process of intergovernmental negotiations leading to the adoption of two global compacts, one for refugees and the other, the Global Compact for Safe, Orderly and Regular Migration. Most non-governmental organisations are focusing their work on the migration compact because refugees hold a different status and are already governed by a refugee compact. 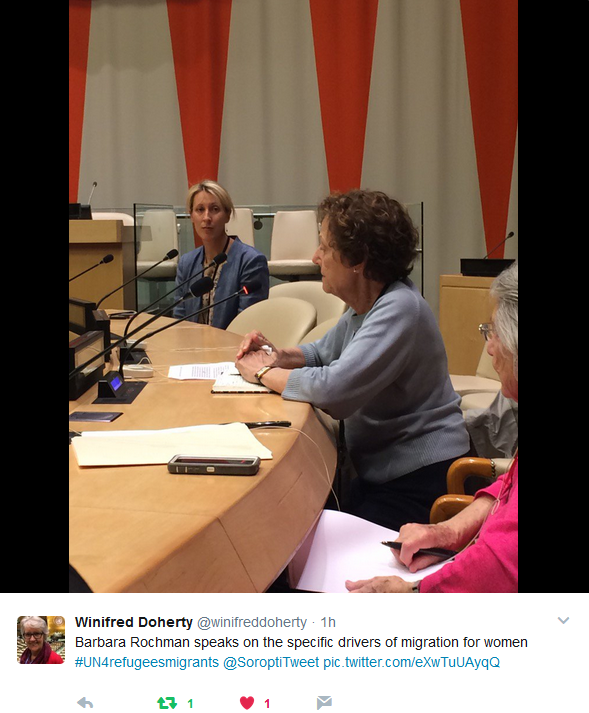 All the commitments in the New York Declaration are important. But there are some that coincide directly with SI’s principles of enabling and empowering women and girls and the necessity for human rights to be part of governmental actions. We know that local Soroptimist clubs have been stepping up in important ways to help migrant women and girls.

What else can we do, as Soroptimists, to assure that the Global Compact on Safe, Orderly Migration will include a human rights perspective and protect and provide for women and children throughout their migration and after reaching their destination? We need to advocate strongly to make sure that these elements of the NY Declaration are fully included in the Global Compact:

The Sustainable Development Goals and Targets, also include protections for migrants:

Goal 5.  Achieve gender equality and empower all women and girls.  (All its provisions would apply to migrant women)

Target 8.8.  Protect labour rights and promote safe and secure working environments of all workers, including migrant workers, particularly women migrants and those in precarious employment.

Target 10.7.  Facilitate orderly, safe, regular and responsible migration and mobility of people, including through the implementation of planned and well-managed migration policies. 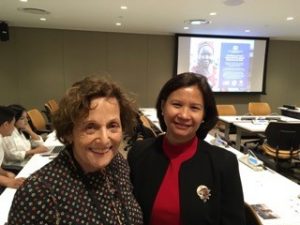 Our UN Representatives in New York and Geneva have been attending the first Interactive Dialogues and Thematic Sessions that began in April. Our UN Reps in Vienna can also attend sessions there focusing on human trafficking. There will be Regional Consultations, Thematic Sessions, Multi-stakeholder Hearings and meetings of UN Regional Economic Commissions in all parts of the world throughout 2017 and 2018.  Scheduled now are meetings in Addis Ababa, Apia, Bali, Bangkok, Berlin, Bishkek, Cairo, Istanbul, Kampala, Mexico, Norway, Prague, Rabat, Santiago, Swaziland, and Turkey.

I believe it is very important that SI members and leadership, as well as the UN Representatives attend and participate in as many of these regional meetings as possible. We need to communicate and exchange information with each other at all levels about what is happening, and where we see opposition and opportunities.

In the beginning of 2018, the ‘Zero’ (First) draft of the Compact will be released and Member States will begin their negotiations in New York. Several UN Missions have already told us that they won’t be focusing on the Compact until the release of the Zero Draft and the start of negotiations.

This gives our members, clubs, regions and leadership the more opportunity to play important roles by meeting or communicating with their governments at home and with UN Missions in their home countries, to share the necessity for the Global Compact on Migration to include human rights and the rights of women and children so that these protections can be effectively implemented and not just be paid lip service.

Human mobility is a global question. Soroptimist International is a global organisation. Who better to work together globally on this enormous challenge? SI can make a real difference for the women and girls who undergo the dangers of migration and the difficult problems facing them when they reach their destinations”.

For further information on this topic please see:

The New York Declaration for Refugees and Migrants