A blog by SI UN Representative, Marion Prechtl following her attendance at the Symposium ”The Journey to Age Equality”, on the occasion of the UN International day of Older Persons held in the House of the European Union, Vienna.

“The opening speech by Monika Vana (Member of the European Parliament) addressed the need to respect the ever-growing population of the elderly and the important focus on promoting good health and ensuring and improving the quality of life.

Ulrike Neufang (Federal Ministry of Labor, Social Affairs, Health and Consumer Protection, Austria) gave a speech on older persons at work and the need to open up new working opportunities for them.

In her keynote, Susanne Herbek (Senior Representative of Senior Citizens’ Office Vienna, Fonds Soziales Wien) talked about active aging and why life is worth living in every phase. A differentiation of the generations is also necessary for the phases of life that follow at 60 plus. Herbek described the older persons in Vienna as enterprising and active, mobile, and health-conscious. Viennese seniors are interested in the environment and in politics.

Clemens Wasner (Founder and CEO of EnliteAI GmbH) spoke about Artificial Intelligence (AI). For Wasner, AI has the potential to elevate human capabilities across all walks of life and age groups to a similar level: from perfect memory to superhuman vision and hearing. In his lecture he showed where and how AI already supports people today and which social questions arise from it. He also talked about the changes in the world of work through the existence of AI, and in which areas AI will replace humans, where coexistence optimizes work, and which functions can not be adopted by an AI.

Martin Morandell (Smart in Life E.U.) looked at why we needed smart and assistive technology to ensure the dignity of the elderly. The desire for self-determination and self-employment continues to grow in old age, according to Morandell. This also includes the desire in the living environment of choice to be able to live up to the end of life in good quality and to take appropriate services when needed. In order not to become dependent on other people, Ambient Assisted Living (AAL) can contribute to independence and self-determination. However, personal contact is seen as particularly important. Video telephony, care organization apps and wellbeing monitoring solutions create new ways to ensure personal contact. Smart and assistive technologies could become an important part of life. Morandell presented an Android smartphone function, which visualizes the text on the screen of the smartphone during speech, thus ensuring a simple communication option of people with speech impairments or hearing impairments. For visually impaired people, they could read texts and identify objects and persons using artificial intelligence. People with dementia could use smart technology to support their spatial and temporal orientation. In order to take advantage of these benefits and the possible improvement in the quality of life, Morandell said that people of old age should have the most simplest access possible to smart & assistive technology.

Karin Eder (Vienna Red Cross, Gerontology and AVO Validation) focussed on aging, dignity and the digital transformation. The question arises as to how technology fits into the social environment. Many experts are convinced that some of the challenges posed by demographic change could be tackled with the use of technical equipment. However, technological development is often more innovation-driven than user requirements. When we talk about aging, dignity and digital transformation, we need to take into account certain aspects such as digital literacy and age, social inclusion and the ability to handle intelligent tools competently. Access to information via the Internet and learning opportunities are omnipresent. Reduced internet access and online media can in many ways lead to fewer opportunities for living. Therefore, there is an urgent need to turn our digital environment into a proactive environment that involves older people instead of excluding them from digital life and digital services. Of course, there are many positive aspects to empower people with dementia with Ambient Assisted Living (AAL) smart tools as smartwatches and smart home systems, and to improve their quality of life, for example through VR technology and other intelligent tools, according to Eder. However, with regard to this vulnerable group, there is an urgent need to take into account the ethical aspects of the use of digital and intelligent tools. The speaker also locates the big problem of exclusion of events and information, as much data on events, information or self-help groups would only be published via the internet. Therefore, many older people would not have access to this information. Eder stressed that we need to focus on how we can shape the future in terms of trust, inclusiveness, openness and security so that digital technologies and networks enable people to lead a conscious, free, responsible and self-determined life. Citizens, politics, administration, stakeholders, NGOs, science, the media and business need to shape their roles in this regard. 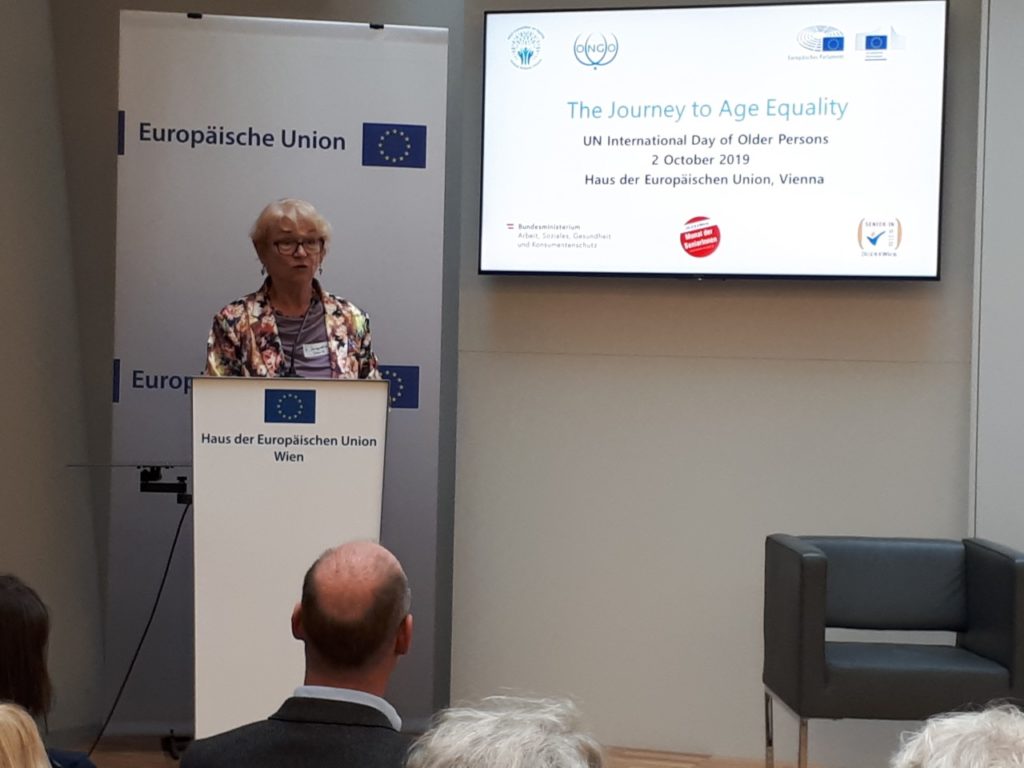 Stefania Ilinca (European Center for Social Welfare Policy and Research, Vienna) talked about gender and socioeconomic inequality in health as well as access to care at an advanced age. The increasing proportion of elderly people in Europe, especially those with functional and cognitive impairments, and the considerable costs of long-term care have attracted much attention in academia and policymakers over the last decade. Although the discourse on dignity in care is progressing, considerations of distributive fairness and inequalities in access to care still do not exist. She vividly described the fact that women are at a great disadvantage compared to men. This concerns both the overweight of dependency in old age and the burden of care with which women are increasingly confronted. As an example, she mentioned the increase in people with dementia in Europe. There are more women in Europe than men with cognitive impairment, and there are large gender differences that would affect many socio-economic risk factors. With the global cost of dementia doubling by 2030 (to over $ 2 trillion), she saw the brunt of

families and informal care and caregivers. However, mainly in women. She discussed in depth the gender aspects of aging and their role in promoting dignity and equality in old age in their presentation.

Ingeborg Geyer (President of the organization: Zonta International) presented the project of Dirk Jarré (President of the European Federation of Older Persons) to use advanced AAL solutions and Artificial Intelligence to personally support and care for the elderly in their homes. People would prefer to grow old at home, but mobile care is becoming increasingly difficult to afford and the number of caregivers in this area would decline. It would therefore need new strategies to provide support here. A safe, smart and comfortable and individualized life in old age with the improvement of the quality of life through the use of fall detectors, sensors and assistive applications must be made possible. Telemedicine and tele-care methods should be increasingly offered. Robots with AI and real support potential in the area of care would have to be implemented. A user-centered focus and user-friendliness would have to be central. Users should be involved as co-developers themselves in the design of these solutions, and Artificial Intelligence solutions should be used intelligently.

Finally, Jacqueline Stark (International Federation on Aging NGO Committee on Aging) talked about lifelong learning – learning for life, learning throughout the lifespan. Their most important message was that permanently improving and practicing communication skills throughout the lifecycle was of utmost necessity. Adult education should always follow three central principles, a systemic approach that fosters learning motivation, a principle of equality in access and pro-active strategies to break down barriers and, finally, intercultural access to respect for diversity in society. New technologies could be very supportive and should be applied. In her lecture, she refers to constructivist theories of learning and postulates that access to new learning technologies should be made more accessible to older people, too. . Neuroplasticity, the ability of the brain to learn over and over again, never ends and opens many possibilities in the sick (people with aphasia or dementia, for example) and also in healthy, old and young people.

She introduced her new project, the ELA Speech Modules, a computer program designed to help people with aphasia relearn language skills, for example. The declining language usage in activities of daily life in interaction with partners or supervisors should be addressed, said the speaker. The ELA language module offers linguistically structured tasks designed to improve and facilitate speech production and understanding, tailored specifically to users’ needs in order to systematically and intensively practice them in everyday life. A central task in the future would be to improve access to AI and assistive technologies, as well as to provide information so that people can use the available technologies for themselves. That would make life worth living in every phase, says Stark.

The symposium was concluded with a podium discussion where the speakers briefly outlined their future projects and visions for the future. Afterwards there was the opportunity for a direct exchange during a social get-together”.