The United Nations Conference on Trade and Development (UNCTAD) was created in 1964 as a permanent body, has 195 states members and is based in Geneva. It is a United Nations body with the aim of promoting trade, investment, and development of developing countries to help them integrate into the world economy on an equal basis. Every four years, UNCTAD organises World Trade Conferences between rich and poor countries.

For the first time in its history the 15th session of the UN Conference on Trade and Development was virtual and managed by women: Secretary-General Rebecca Grynspan as head of UNCTAD, together with Prime Minister of Barbados, Mia Amor Mottley, as President of the Conference. 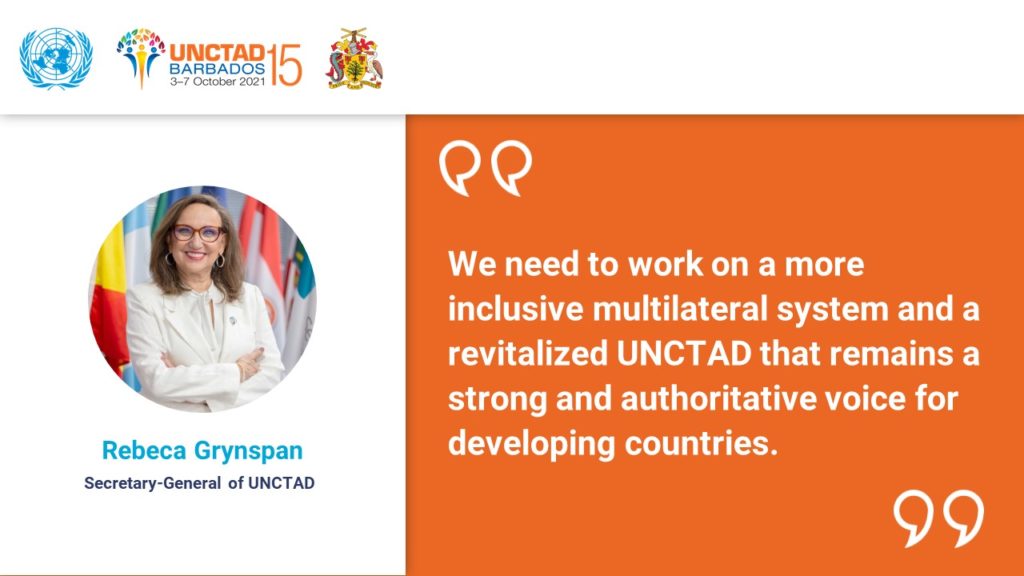 5,300 participants from more than 140 countries admitted the importance of solidarity on trade-related questions, improvement of the world solidarity (sharing of vaccinations) and global emerging challenges (COVID- 19). Reducing inequalities, preventing unfair-trade, climate emergency and vulnerability by ensuring that trade works for all, and development remains high on the political agenda.

The theme, “From inequality and vulnerability to prosperity for all”, is a clear call to work to bridge the world in support for the benefit of all. Three dialogues and discussions were presented during the conference:

Statements were made by Michelle Bachelet and others about the “greater multilateralism” as well as local integration; a necessity to increase the resilience of developing countries and enhance their recovery. 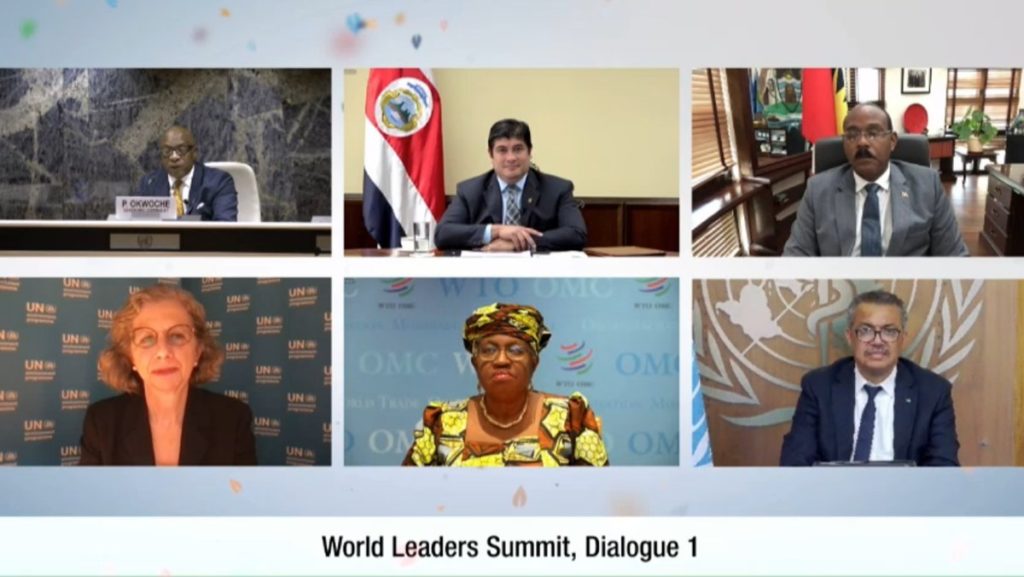 Screenshot image of the virtual event, courtesy of UNCTAD.

The member states have adopted the “Bridgetown Covenant”, which sets out a roadmap for economic transformation through economic diversification. Its aim is to the improvement of the economic stability, resilience, and financing for development. Furthermore, solve the unsustainable debt burden of developing countries and rethinking how multilateralism will work in the future.

This document highlights the political dimensions in a non-discriminatory, fair and balanced manner of the different international financial issues (e.g. tax transparency, anti-money laundering and combating the financing of terrorism) as well as the important role of UNCTAD to challenge these issues. All member states agreed to promote an inclusive and sustainable economic recovery in developing countries facing unequal access to COVID-19 vaccines, debt crisis, climate change emergencies, etc.

Also, the political declaration, named the “Spirit of Speightstown”, prepared under the responsibility of the Government of Barbados, has been adopted by all member states. As a summary: “full global recovery will not be possible without enhanced international cooperation and until the pandemic subsides in each and every country.” The communiqué states that the global crisis is an opportunity for countries to redouble their efforts to move from existing inequalities and vulnerability to prosperity for all.

President of Kenya, Uhuru Kenyatta pled the international community to work together towards a functional multilateral system for all. “No single government or multilateral agency can address global threats alone,” he said. “We must work together in solidarity if we are to succeed.” He alerted that keeping a status quo would prevent the global economy from recovering after this pandemic and prevent further environmental degradation that will lead to disasters.