“There is no doubt that water is essential for life, as much as food security. While in the past, this issue might have been taken for granted, especially in countries of the developed world, increasingly there is greater awareness that water is a resource that might not always be easily available for human survival.

Water security is bound up with a range of issues from poverty and health to building sustainable cities and engendering economic development. In recent decades, technological breakthrough though smart technology and smart solutions in response to the challenges of water management and water treatment has been credited for generating new forms of water sources to meet our different needs.

The business dimension to water technology has presented itself as an area of special interest, especially with evolving new technologies. Moreover, water security has massive implications for businesses as it has the potential for creating jobs. In this regard, what becomes strategic is the promotion of public-private partnerships to ensure water security. In fact, in many countries, water security is a multi-stakeholder issue requiring the intervention of and efficient coordination by governments, financial institutions, NGOs, water institutions, and other stakeholders acting together with a common goal.

The need to raise awareness on “water literacy” is also imperative. Leaders, in particular, might be singled out as a group among whom being water literate is seen to be necessary especially since they are instrumental in making sound decisions around water – its sources and its uses – because water management entails coming up with the right policies regarding water management. In fact, going forward, knowledge and capacity building among politicians, business owners, and ordinary persons is imperative for water security. When leaders are water literate, it is more likely citizens become water literate themselves and, in turn, the solutions to water problems can be generated collectively.

Because water is integral for our survival, water security should be recognised as a human right. There is a need, however, to reduce costs related to cutting-edge technologies in order to realise the objective of making water a right for each and every individual. This is ever so imperative especially in ensuring access to clean water for all since this has the effect of reducing the global disease burden since safe drinking water is a determinant of health outcomes.

Ensuring water security for all urgently requires innovative solutions. Water security is a global concern which needs to be tackled quickly and efficiently especially with population pressure in the cities as urban areas continue to grow. In fact, the UN estimates that the world population will grow to 9.3 billion in 2050 and that the number of people living in cities will increase to 6.3 billion. On this issue, the building of “sustainable cities” has to involve the efficient management of water. This is especially challenging for countries in the developing world.

Since cutting-edge technologies in water management and treatment are almost always end up being shared across cultures, meeting people’s varying water needs invariably entails cultural training for the local people, as well as the need for sensitivity to local cultures (localization). Eco-friendly methods to ensure drinking water quality are also significant to safeguard sustainability.

It is evident that water security captured in SDG6 should be considered a cross-cutting issue intersecting with urbanisation, sustainability, climate change, technologies, and innovation and not a stand-alone sustainable development goal in the quest towards development. That it entails a complex confluence of factors and variables was borne out in the discussions raised at the 10th Water Business Forum held in Singapore in July 2018 organised by the Korean Government – a meeting at which Soroptimist International was present. The forum was opened by Ms. Eunkyung Kim, Minister, Ministry of Environment, Republic of Korea, and other high-level government officials from the country. Also present was Ms. Diane D’Arras, President of the International Water Association (IWA). In addition to paper presentations, there was also a panel discussion of experts from various UN agencies as well as NGOs. 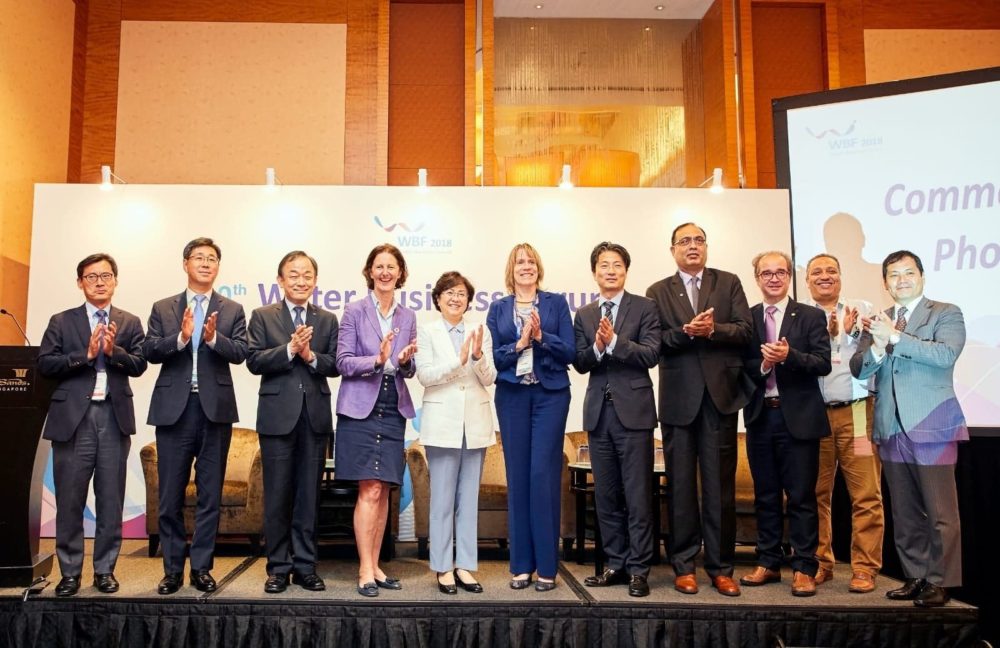 The role women play in the water agenda, as much as the development agenda, should be recognised – a point raised at the forum by the SI representative. Taking on board the social dimension of water security is not only about exercising inclusiveness but is imperative especially since it is a near universal that women are primarily responsible for collecting water in the household – a role seen as an extension of their caregiver role in the family. For women then, the “physical access constraints and adequacy of supply, inform the experience of water insecurity”, as highlighted by Edward Stevenson and his colleagues.[1] Studies have also found that in water insecure situations, women more than men are more likely to experience emotional distress. New technologies in securing water, thus, should be assessed in light of women’s empowerment since they free up time for women to engage in other tasks as well as economic economics. Because gender hierarchies continue to persist in many societies, it is critical that women’s voices should be heard in the development discourse.

The experts at the forum collectively acknowledged that the water agenda requires being inclusive of women, especially since they experience development differently from men. In all UN projects, agencies undertake gender mainstreaming so as to ensure that women’s needs, interests, and concerns are being met. Because gender is a systemic problem in nearly all cultures, it becomes especially critical to ensure that gender mainstreaming is undertaken at the policy as well as the programmatic levels.

Thus, as one expert remarked, water education starts with the leadership of any country and gradually this trickles down to the citizenry, leading to changes in the mindset of people and subsequently how policies on the ground would take shape as well. Another expert also remarked that some countries should work towards increasing the numbers of women in leadership; not only would these women act as role models but this would demonstrate the commitment of leaders to engendering gender equality in wider society.

Water security is an everyday life issue and it continues to be very important. However, water security is increasingly being recognised as a challenge today. Given this scenario, discrete steps need to be taken to transform our global education system to raise awareness on the diverse issues related to water security.

There is also heightened awareness that gender hierarchies are evident in water development, management, and utilisation, calling for more research and policy attention in these areas. Because Soroptimist International recognises that water security is an important part of the 2030 agenda, it is committed to become actively involved to push for gender equality in this area as a member of the international community as well as engage in a range of projects and programmes across the world to ensure that women are not left behind in the global path towards development”.