20 March 2017, saw an interactive panel of five experts from national gender equality mechanisms, academia, civil society organisations and national statistical offices discuss, Enhancing availability and use of data and gender statistics to support accelerated implementation of the Beijing Platform for Action as well as the 2030 Agenda for Sustainable Development. This was followed by comments and questions from Member States and other stakeholders, including Soroptimist International.

The expert panel focused on the use of data on women’s participation at decision-making at all levels; the need for greater capacity building and the development of national monitoring and assessment policies. Linda Laura Sabbadini, Head of National Research Institute, Italy, spoke of the lack of financing given to gender statistics, as it is often not a priority. She highlighted that governments and national statistical offices must work together. The National Statistics Commission in Italy carried out a survey with the support of the Department of Equal Opportunity on violence against women, which showed stalking of women was common in post separation of relationships. This resulted in the formation of a new law against stalking and a subsequent awareness campaign. Ms Sabbadini spoke of the cycle of violence: how women often tolerate violence in the name of their children, and how through witnessing such violence, children may then repeat these acts themselves. Her organisation has built alliances with stakeholders and made a firm commitment with the Director of the National Statistical Institute to carry our disaggregated data to ensure ongoing gender statistics for the SDGs.

Lucia Scuro, Economic Commission of Latin America and the Caribbean, works on gender statistics and unpaid care work. For forty years, her organisation has had a Gender Agenda subsidiary body from all countries in the region. The link between the 2030 Agenda and the Regional Gender Agenda, is one example of how progress is being made towards the goal of reducing inequality between women and men in all areas.

Aija Zigure, President, Central Statistical Bureau of Latvia and a Rapporteur to the UN Statistical Commission Bureau, spoke of some of the achievements of the UN Statistical Commission such as the establishment of an inter-agency and expert group on gender statistics, and the encouragement of a methodological development. One of the challenges of statistics is that they are under-reported; gender is a cross-sectional issue and composes of 1/3 of all the 2030 Agenda indicators. She concluded by stating it is important to make use of non-traditional sources of data and to coordinate with other agencies and civil society organisation for better and more extensive gender statistics.

Sian Phillips, on behalf of Sarah Golding, Department of Foreign Ministry, Australia, stated that a gender equality strategy is at the centre of its foreign policy and the Australian government prioritizes gender statistics. The challenge of effectively monitoring gender sensitive data for the SDGs, if women are left out, makes it difficult to respond to the way women experience inequalities and poverty. This can be overcome by collecting data at a household level, the requirement of individual measurement to ensure that no one is left behind. Australia is supporting , together with the United Nations Population Fund, a study in Timor Leste and other Pacific areas on prevalence data on physical or sexual violence (more than 30%). In the Solomon Islands the information resulted in legislation change. Lack of data internationally makes it too easy to ignore the necessity to collect it.

Imelda Musana, Deputy Executive Director of Uganda Bureau of Statistics outlined that in 2016, Uganda ranked 61st in gender equality. The second National Development Plan of Uganda is aligned with the SDGs goals, specifically SDG 5 – access to all education by all girls. A national census is carried out every ten years in Uganda which leads to a huge gap in data. There is also limited appreciation in some sectors for the importance of data, however she assured delegates that Uganda is putting in all efforts to ensure up to date gender data for planning and decision-making. 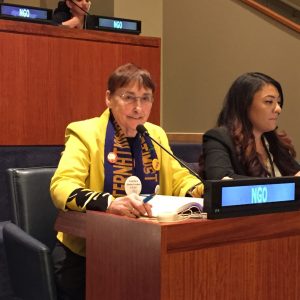 Pat Black, Soroptimist International Director of Advocacy, spoke of the need to use non-traditional data sources to collect data at local levels, and congratulated panel expert Aija Zigure for highlighting this point. Pat explained that using a woman-centered community based approach has positive and economic outcomes. She focused on the example of Soroptimist International collaborating with the Prison Reform Trust in the UK on Transforming Lives, to inform policy and practice, and prosecution and sentencing guidelines with data analysis; as well as using well researched good practice and thematic briefings for those working with women in penal system. Soroptimist International collected standardised information at grassroots level and this data has impacted UK government decisions. This project encompasses several SDGs, justice and legal reform underpins the achievement of Goal 4, lack of education and training opportunities causing unemployment and poverty are often drivers for offending, Goal 5. Gender-specific offences can lack consideration of the circumstances (including children) and treatment in detention. Systems fail to recognise the role sexual abuse and domestic violence play in women’s offending.

This example highlights the positive role Soroptimist International has played in collecting and providing data; and that NGOs in general can make an enormous impact in terms of expertise and knowledge. The relationship between NGOs and governments is dynamic, and should be strengthened to ensure that robust systems are in place and utilised to collect gender-differentiated reliable data.