Plans for the annual Soroptimist International (SI) in person board meeting and Annual General Meeting (AGM) to be held in Seattle may have been abandoned, but the SI Board and Federation Presidents embraced the digital alternative holding a series of highly successful meetings over four days. Commencing on 27 July with the board meeting, SI President Sharon Fisher welcomed the eleven Directors, SI Executive Team, Federation Presidents and invited delegates, and thanked them for their willingness and commitment to ‘meet digitally’ for the foreseeable future.

President Sharon gave a very warm welcome to Connie Mutunhu from Zimbabwe, who is the first Federation President of SI of Africa Federation.  SI of Africa Federation is the fifth Member of SI and was officially inaugurated on 30 June this year. Congratulating all who have supported this wonderful development, SI President Sharon said “President Connie, from Zimbabwe, has accepted the torch from Mary Muia who worked tirelessly with the task force.  This has been a vision of many for a long time including the 2 sponsoring Federations who formed the task force.  We look forward to celebrating in person but for now it must be online.  Welcome to the SI family and all the best for your future as our 5th Federation.”

The agenda was adopted with an important addition to agree SI’s formal response to the discussion concerning withdrawal of some member states from the Istanbul Convention (Preventing and Combating Violence against Women and Domestic Violence). During the meeting it was decided that an open letter would be circulated, and that Federations and affected member states would be encouraged to send it to their respective governments. Following the initial formalities of the meeting the Board approved amendments to the SI Bye-Laws and confirmed the selection panels who will interview candidates for the roles of SI Treasurer and Director of Advocacy for the biennium 2022 – 2023. The panels will be chaired by SI President Elect, Maureen Maguire.

Revisions were agreed to two of the SI ‘Where We Stand Statements’: Economic Empowerment of Women and Girls and Access to Education and Training. The Board have also agreed that the Where We Stand Statements will be renamed as ‘Position Papers’ – further information regarding this will be announced over the coming weeks. Terms of Reference for the Committee overseeing the SI LAB and updated versions of four operational manuals were also approved by the Board.

Finances were taken on day two when the Board received a presentation regarding the SI investment portfolio, quarterly updates from the SI Treasurer and the opportunity to review the 2019 financial statements with the SI Chair of Finance, Treasurer and Global Executive Director. The appointed auditor joined the meeting to respond to any queries raised by Directors regarding the 2019 audit. The financial statements were approved and submitted to the Federation Authorised Representatives (AR’s) at the AGM. The Board concluded the finance section of the meeting by reviewing the tender process to recommend the appointment of an auditor for a 3-year period from 2020 to the Authorised Representatives (AR’s) of the Member Federations

The SI updated risk register was reviewed and approved as was the 2019 Annual report, for which Directors thanked SI staff, noting the new attractive design. Several sessions were dedicated to discussion to review the strategic plan and the preliminary findings of the SI Structure Review Taskforce. Further Board discussions included plans for SI Advocacy, President’s Appeal and Communications work, and updating plans to celebrate the 100th anniversary of the organisation.

View and download your copy of the Annual Report 2019 below. 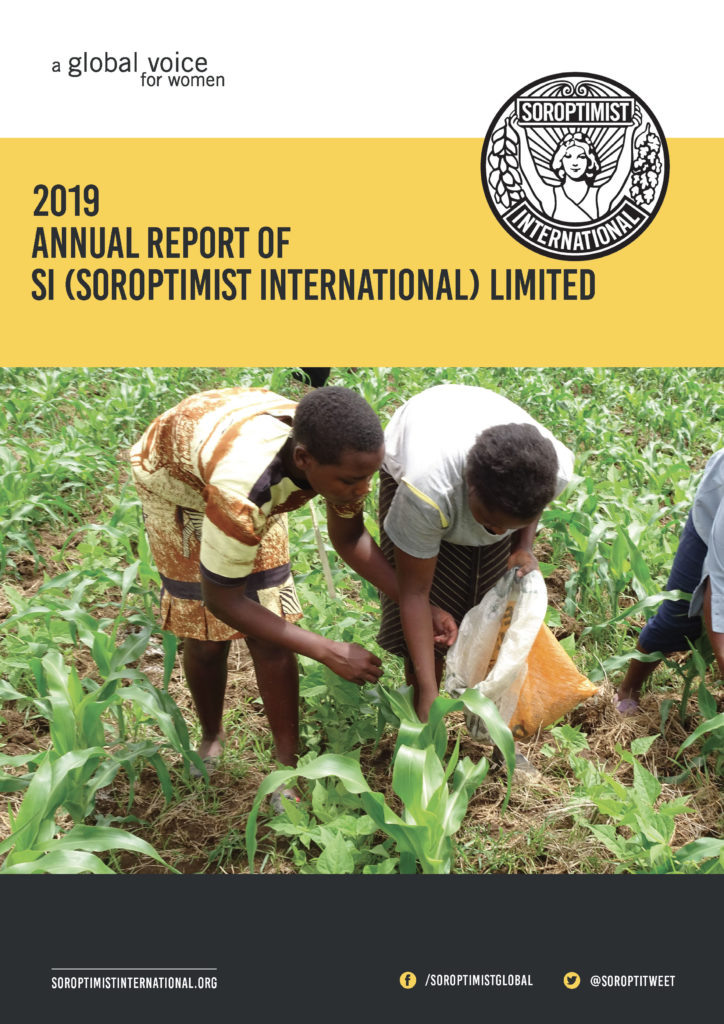 The AGM was held on 29 July with over 200 Soroptimists in attendance proving that ‘going digital globally’ is not a challenge for Soroptimists! The SI AGM is held annually by the five members of ‘SI (Soroptimist International) Limited’; the members being the five Federations. Each Federation appoints an Authorised Representative (AR) to represent members of their Federation at the meeting. This year the AR’s were:

The meeting was Chaired by SI President Sharon Fisher who was delighted to welcome a global representation of Soroptimists to the meeting, her opening remarks included recognising that we are at a time in history that is unprecedented with global change.  Yet our mission is still so relevant since women and girls are suffering more in this pandemic and a global audience is finally taking notice of what we have known for almost 100 years.  As we pivot to online communication we can reach more people to hear our Global Voice.  She applauded and acknowledged that this was probably one of the largest attendances for an SI AGM. President Sharon congratulated SI of Africa Federation and the team that have supported them, for all their efforts in becoming the fifth Federation of SI, citing that “it is an exciting development for our wonderful organisation”. Formalities commenced with adoption of the agenda and noting the changes of Directors and Position Holders in the company since the 2019 AGM. The 2019 AGM minutes, annual report and financial statements were received by the AR’s.  They agreed to appoint Streets Chartered Accountants as auditors for the financial years 2020, 2021 and 2022. Following conclusion of business matters, presentations were given on:

2020 – 2021, The Road to Equality by Appeal Coordinator’s Ayushi Kundu and Olga Sidenko

President Sharon’s closing remarks included a thank you to all those who work tirelessly for SI and to those who joined the online meeting.  SI will provide more opportunities with webinars and meetings given that Soroptimist projects and our global voice are needed more than ever to overcome the pushback we are seeing.  As we continue to influence global policy, finding new pathways to communicate and achieve our global mission is essential to ensuring a better future for women and girls.