“In 2017, at the first edition of the UN ocean conference in New York, the United Nations Secretary General had already warned that the oceans face “an unprecedented threat” and that “only decisive and coordinated global action can solve the problems created by humanity”. Two years later, in 2019, António Guterres was photographed for the front page of “Time” magazine wearing a suit and tie, with water above his knees. This time, in Lisbon, the 4th UN Ocean Conference was co-hosted by Portugal and Kenya, with more than 7,000 participants in Lisbon for the biggest event on oceans and seas. I heard in the corridors this was one of the biggest conferences ever organised on this topic. Under the slogan “Save the Oceans, Protect the Future”, 25 heads of state and government, 100 ministers, 38 specialised agencies and international organisations responded to the UN’s call to discuss the fragile state of the seas and oceans, including 1,200 non-governmental organisations where Soroptimist International was included. 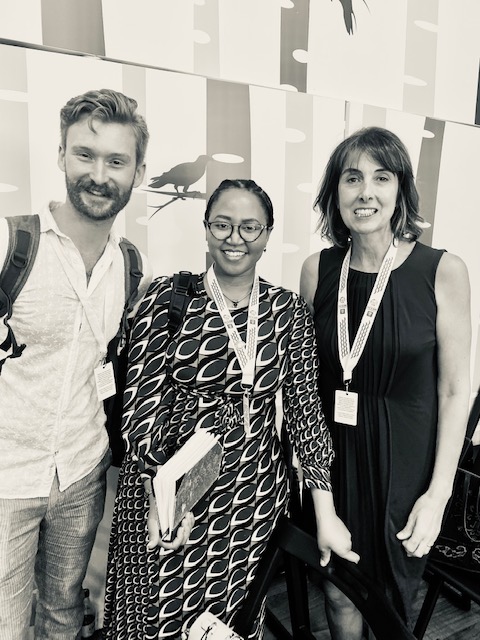 An Ocean of good intentions, the Lisbon Declaration approved by the 159 present delegations, recognises that the sea is vital for life on earth and conveys a shared ocean approach, based on strong scientific support, modern standards and investment, but the problem remains in the international compromises that all countries and stakeholders will really implement. Policies must be turned into actions globally, regionally, nationally and locally. It is a unique moment to keep the general public, stakeholders and governments fully informed.

Miguel Serpa Soares, UN under Secretary General, called it a “muscled declaration”, defending that the text goes beyond diagnosis, defining concrete priorities and political orientation to guide the action of States in the ocean preservation.

The wide participation of world decision makers showed that everyone understood that the “green transition” depends on the “blue transition”.

Facts around the ocean “table”. 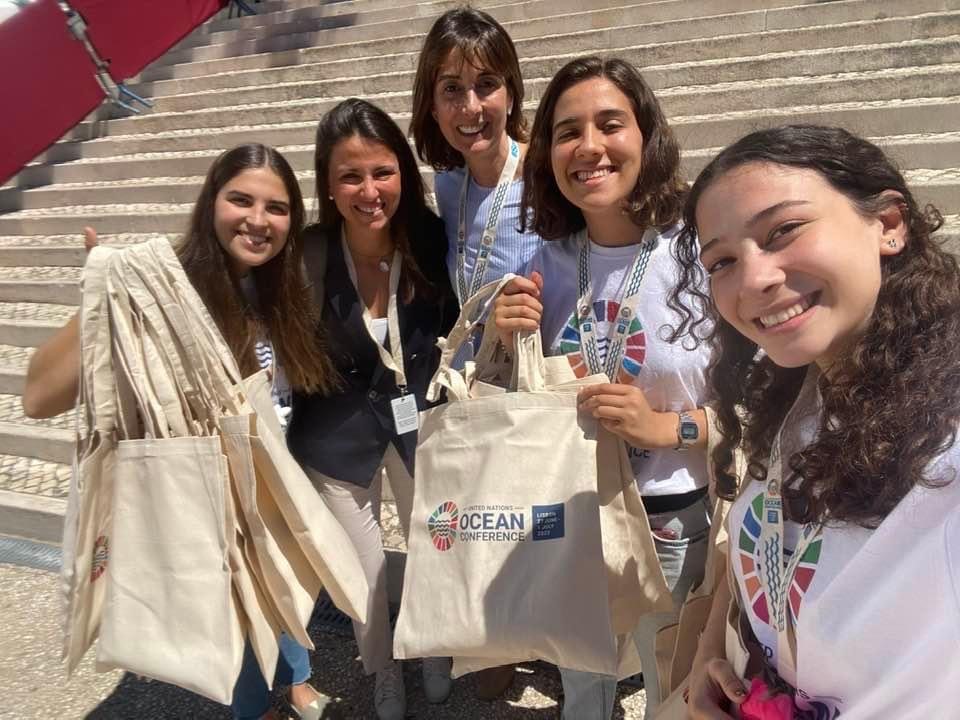 The oceans occupy more than 70% of the world’s surface and generate half of the oxygen we breathe which is very critical for human kind preservation. At the same time, ocean water collects more than 90% of the excess heat caused by environmental warming. Humanity has managed to significantly upset the balance of this huge aquatic ecosystem. Less than 10% of the planet’s oceans are currently protected, which is a real challenge. And where no country has a clear responsibility, we all need to have a common responsibility.

The sign – a stressful strong one – that was sent as closing point of the Lisbon UN Ocean Conference was that we all need to work now, decisively, holistically and committed to the urgent purpose of improving the health, sustainable use and resilience of the oceans.

Secretary General Guterres could not be clearer in his communication, saying we were in this event to ring the siren, to bring together as many voices and people as possible, so we can ultimately do what we need to do, saving the oceans. Because, Guterres said, there is still selfishness and people who continue to think that international waters are their possession, which is completely false, the oceans are ours, they belong to humanity, to all countries and peoples of the world.

Some of the Problems

Maybe, if action is not just in a paper, we can prevent future generations from swimming in plastic and waste or suffering from escalating tragedies described in the UN Ocean conference, such as:

Where are the women? 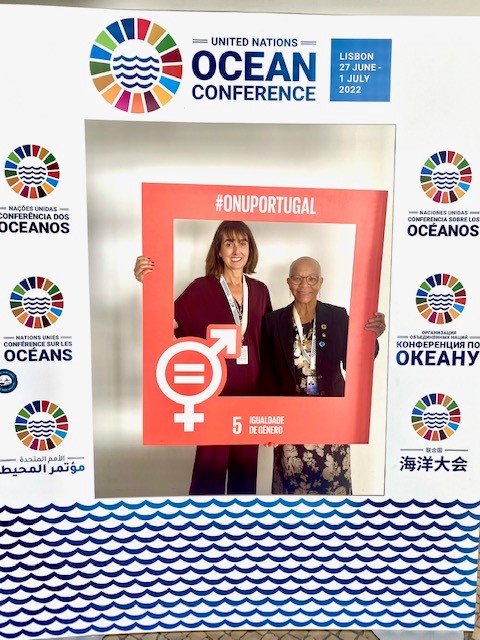 Quoting UN Secretary General, António Guterres, on the World Oceans Day 2019, “governments, international organisations, private companies, communities and individuals are urged to promote gender equality and the rights of women and girls as a crucial contribution to meeting ocean challenges.”

Women are the primary users of ocean resources. They need to have the opportunity to participate in all sectors of ocean decisions. For instance, in fishery traditional communities, women seldom go offshore, they normally stay in the near shore area. The fact is that they are working but also want to stay actively caring for their children and family. They are the ones inspiring their community’s younger generations, by spending more time with them, educating them.

Everyone needs to have a place in this dialogue, not only decision makers and scientists, it is crucial to listen and engage civil society, activists, youth, women and early career persons.

There were several interesting debates throughout the UN Ocean Conference, but very few were women focused. I was lucky to meet very intelligent women speakers. One is the President of World Maritime University (WMU), Dr. Cleopatra Doumbia-Henry, hosting a number of top side events, for instance, “Empowering Women for the UN decade of Ocean Science for Sustainable Development”. In the opening session she highlighted that she was the first ever woman President of the WMU.

I also met H.E. Ilana Victorya Seid, Ambassador Extraordinary and Plenipotentiary Permanent Representative of Palau to the United Nations. When I explained I am a Soroptimist, she immediately replied: “Do you know that Palau is a matriarchic society?”.

Palau is a small tiny island that relies on fishery. For Ambassador Victorya Seid, there is no greater damage for the environment than climate change, because it is the oxygen that is produced by the oceans to keep us alive. She referred to plastic as a dreadful living being, that stays forever in the oceans, so we need to avoid this material and find other sources, because recycling is not enough.

I loved to hear Nozi Mbongwa, from South Africa, Manager of the Oceans Alive Initiative, head of education of the Sustainable Seas Trust. This project is amazing and involves the empowerment of local communities to feel part of the system and understand that the ocean is alive.

What can we do to support the ocean? 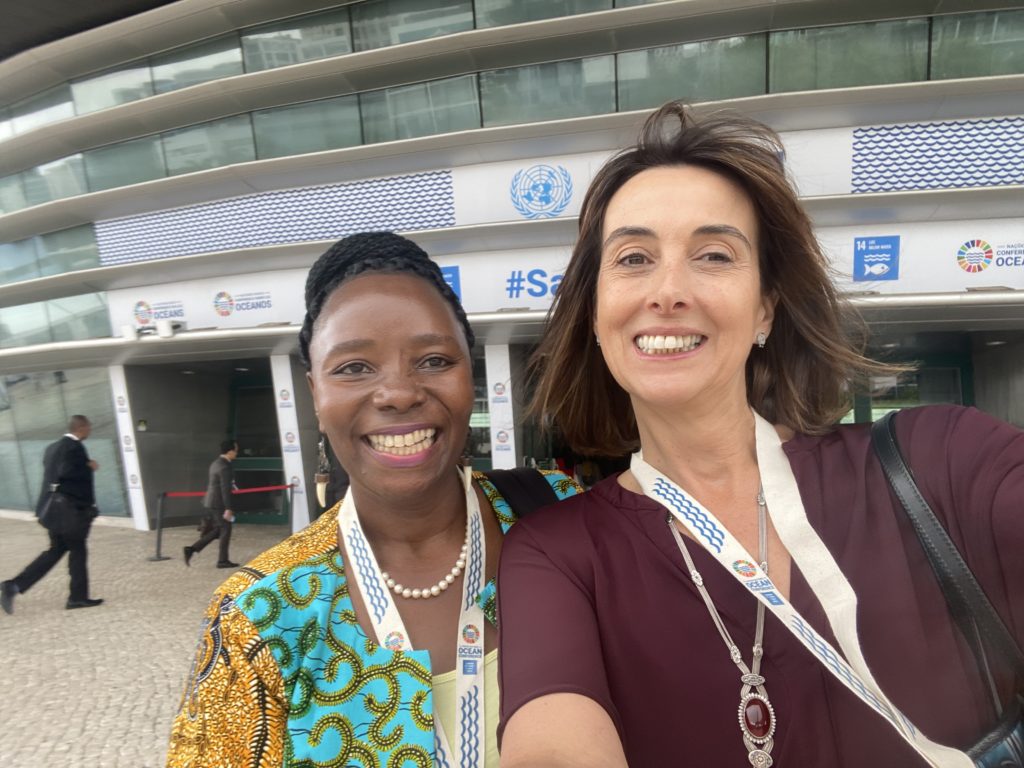 In order to preserve the oceans as central banks of earth’s carbon stocks and rebuild oceanic ecosystems, these were described as positive practices, where soroptimists may study further and be active in advocating or implementing “hands on” projects to contribute towards a balanced ocean:

We need to look at the various ways and angles all of us can interact with these issues and may be able to change. The language or vocabulary of “collecting”, “using”, “consuming”, needs to shift towards an understanding of the effects each act can have in ensuring the wellbeing of the ocean. The language should instead be “protecting”, “respecting” and “guaranteeing” life in the ocean. Recycling is not enough anymore.

Science, technology and mapping are very important allies. So there needs to see a huge investment on knowledge and intervention for the ocean sustainability but yet, United Nations SDG14 is one of the least invested of all objectives. Restoring harmony with nature through a healthy, productive, sustainable and resilient ocean is difficult when everyone needs to be involved, heard and informed, because we are all in it together.

As for my personal side, living pretty close to the ocean all my life in the most occidental place of continental Europe gave me this opportunity to observe life in a changing ocean. I could watch ocean waters, waves, the impact of ocean adversity in erosion, the beauty of fish diversity, some fish that did not appear so much anymore after some years and I could also see how human beings managed quite deficiently this opportunity and dealt sometimes, not always, wrongly with the ocean: fishermen, fishing communities, tourists, aquatic sporters, industry, all getting multiple benefits to the cost of the ocean’s balance.

The UN Ocean Conference made me realise the many constituents and actors in this trajectory. This equation can be quite complex even without any scientific knowledge that could guide us further so it was a gift being able to participate and exchange inputs.

So, unfortunately, if nobody seems to pay due attention, if there is not enough political commitment, there will be a moment of no return. It is a suicide to proceed in this direction. In spite of some changes that our oceans are facing, the fact is that they are growing ever more unstable, thanks to the climate disruptions WE have caused.

The Soroptimist mission towards the ocean 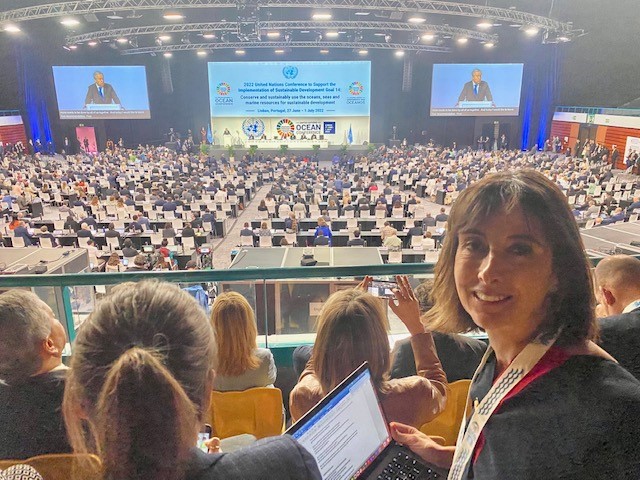 Soroptimists can feel energised by the incredible blue solutions that are being developed to make oceans more sustainable, which can be followed in each of the Federations, Unions and Clubs, eg.:

World Oceans Day (8 June) is a date we Soroptimists should keep in our mind. It is vital to accomplish good results, all count, they will determine a future or extinction on the planet, for generations after ours. So, enough with the appeals, we must demand that all signatories of the Lisbon Declaration quickly take depollution measures, invest in science, map the oceans and stop using plastic and illegally and disproportionately fishing. Again, action not just in a paper.”

Register for the next SI Voices Webinar!