“Why Bhutan and why beanies? 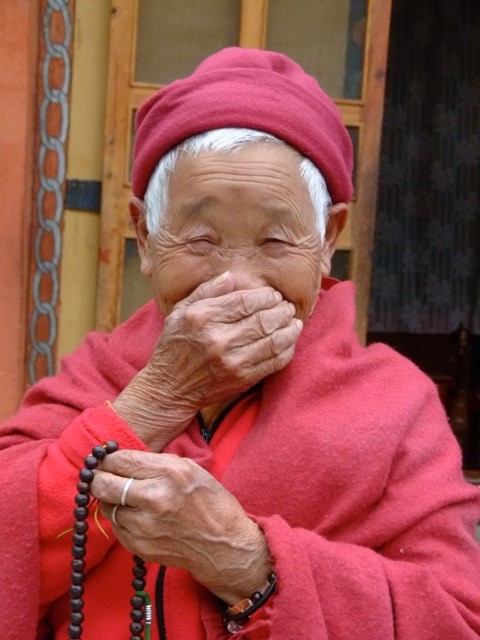 Bhutan, high in the Himalayas had been a fascination of mine for more than 30 years and finally I was to realise a long-held dream in November 2010. Having researched the destination, and following a conversation with a friend who had just returned from working in Bhutan, I found out that there was very limited funding and support for Nuns. Coming into the Bhutanese winter, I decided that beanies (warm hats) would be welcomed; a small gift that could bring a little comfort to Nuns living in a very cold Himalayan climate. 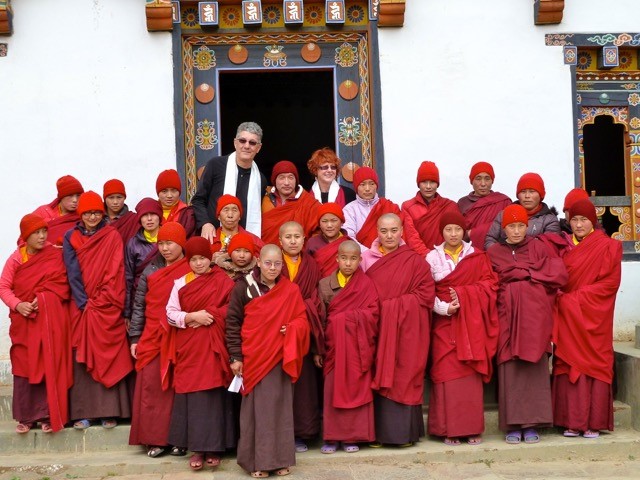 Pamela, Ross (centre back) and the Nuns of Shedra Tang Bebzur Bumthang Nunnery in Central Bhutan

Why the name ‘The Red Beanie Thunder Dragon Project’?

The Thunder Dragon is a Bhutanese mythological dragon that is the national emblem as seen on the flag, and red is the colour of Buddhist religion in Bhutan.

A project was initiated to sew, knit or crochet red beanies for Nuns in Bhutan.  Our small club set a goal of 500 red beanies and with an invitation to other SI clubs to join in with the project, we reached our goal easily.

How were the ‘Red Beanies’ delivered?

Flying into Bhutan is like flying into nowhere else in the world. Taking a deep breath, being struck by the awe of the snowy, mountainous, Himalayan landscape, our small plane skirted the ridges and landed. The gracious, magical and mysterious Bhutanese culture was there to see from the moment my partner and I set foot on this precious land.

Chiara from ‘Journeys of the Spirit’ with Bhutanese women

Our Bhutanese guide dressed in national costume met us and explained to the customs officers that the three, large ungainly and tightly packed bags with red beanies were gifts that were not to be sold. Finally, we were permitted to take possession of our bundles and leave. Our guide was surprised, amazed and delighted that  tourists would bring beanies to give Nuns. He made it his mission to identify monasteries, paved the way for our visits and interpreted for us. Engaging our guide in this way fostered a deep sense of goodwill and friendship.

We visited two monasteries and gifted over 700 red beanies. Since 2010 ‘The Red Beanie Thunder Dragon Project’ has continued thanks to the support of other Western Australian SI clubs, and in 2011 and 2012, two Soroptimist Sisters volunteered to deliver red  beanies to Bhutan. 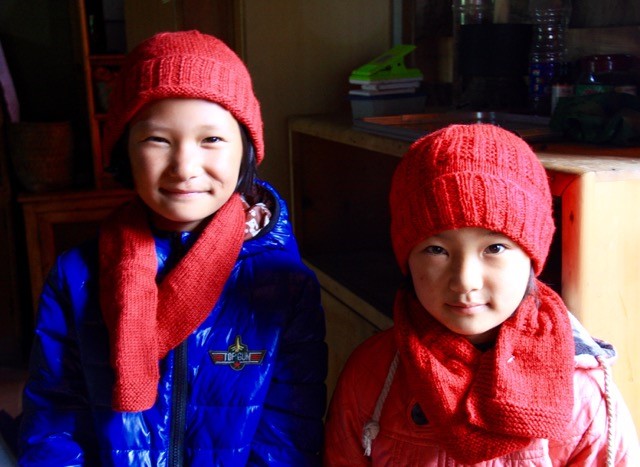 What is the future of ‘The Red Beanie Thunder Dragon Project’?

SI Fremantle has, over the last four years coordinated this wonderful project and partnered with ‘Journeys of the Spirit’,  http://journeysofthespirit.com.au ,  a boutique travel company to deliver red beanies every year to Bhutan. Since 2010, and as we travel forwards, Western Australian SI Clubs remain committed to knitting, sewing or crocheting red beanies, scarves and gloves.  Our partners, ‘Journeys of the Spirit’, pledge to deliver the red beanies to Nuns and disadvantaged women and children in Bhutan.

The continuation of the project relies on the generosity of SI Club members and friends making the red beanies and the ongoing, wonderfully reliable transport and delivery arrangements with our partners ‘Journeys of the Spirit’’.  ‘The Red Beanie Thunder Dragon Project’ has so far gifted over 3500 red beanies to Nuns and disadvantaged women and children in Bhutan.

Pamela Fruin has been a Soroptimist for seventeen years is and is a member of Soroptimist International, Fremantle, Western Australia.