The Fourth World Conference of Women’s Shelters (4WCWS) was held at the Kaohsiung Exhibition Center in southern Taiwan.  The Opening Ceremony was on 5 November and advocates from 100 nations, with 1,400 government and Non-Governmental Organisation (NGO) representatives in attendance, eager to share ideas on how to improve women’s shelters and end violence against women.  Taiwan’s President Tsai Ing-wen and the Minister of Health and Welfare Shih-Chung both attended the opening ceremony to show their support.  The event was co-organized by the Garden of Hope Foundation (GOH) and the Global Network of Women’s Shelters (GNWS) and brought to Asia for the first time.

“This conference is the world’s largest international meeting on the protection of women’s rights and the prevention of violence against women. I was invited to participate as a speaker as a result of my contribution to a CSW63 parallel event, sponsored by Soroptimist International, Taiwan Coalition Against Violence and Pan-Pacific and Southeast Asia Women’s Association. On the opening day, President Tsai addressed the attendees and highlighted Taiwan’s progress on gender equality.  The Chairperson of GNWS, Chi Hui-Jung, who is also CEO of GOH, expressed how the conference’s theme “Impact and Solidarity” aimed to use the sharing of knowledge and mutual support to bring forth impactful change.  Global issues such as the protection of women with disabilities, the rights of older women, the safety of migrant women, and female genital mutilation (FGM) were highlighted by renowned advocates from around the world who were in attendance. 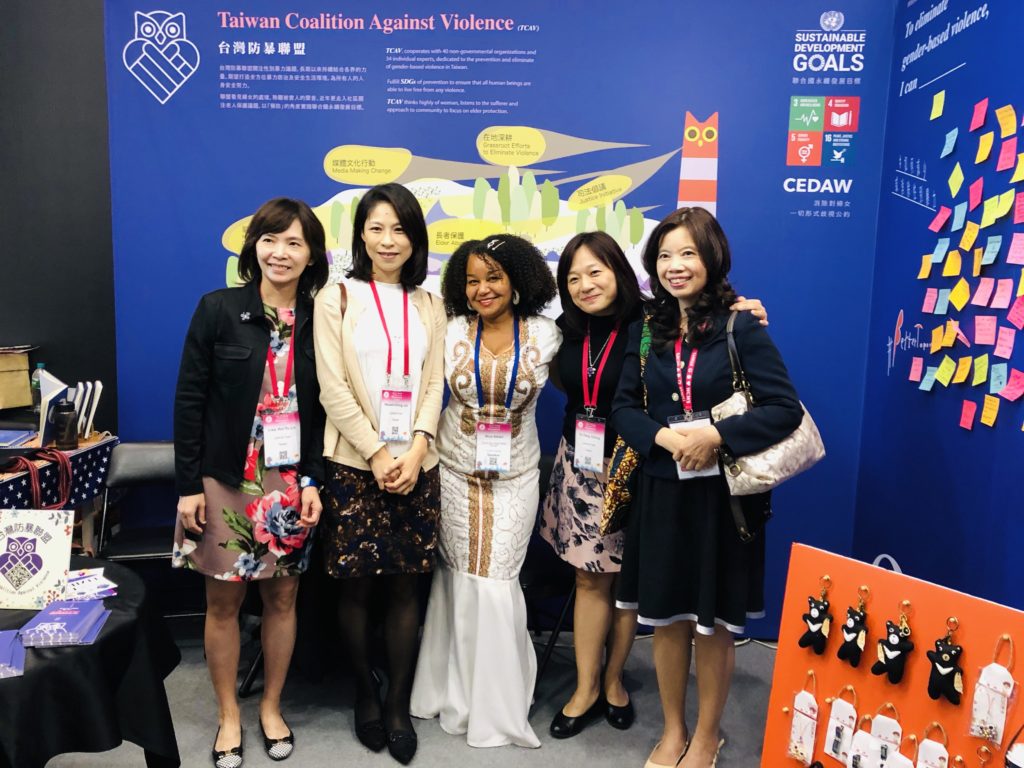 Taiwanese music and dance set a lively tone for the four-day event.  The MCs, Aldith Hunkar and Raymond Lee, engaged with the presenters and attendees to keep the energy high and punctuate ideas that made impactful change.  Keynote speaker Kamla Bhashin, the powerful Indian Activist, called for women’s solidarity. Kamla praised members of the audience who are “survivors, supporters of survivors, drivers, and transformers” for gathering together to make a lasting impact by making feminine voices heard.  She encouraged us to become more creative so we can engage in more meaningful work, humanize our families, our communities and our parliaments so that every person would feel loved and protected. 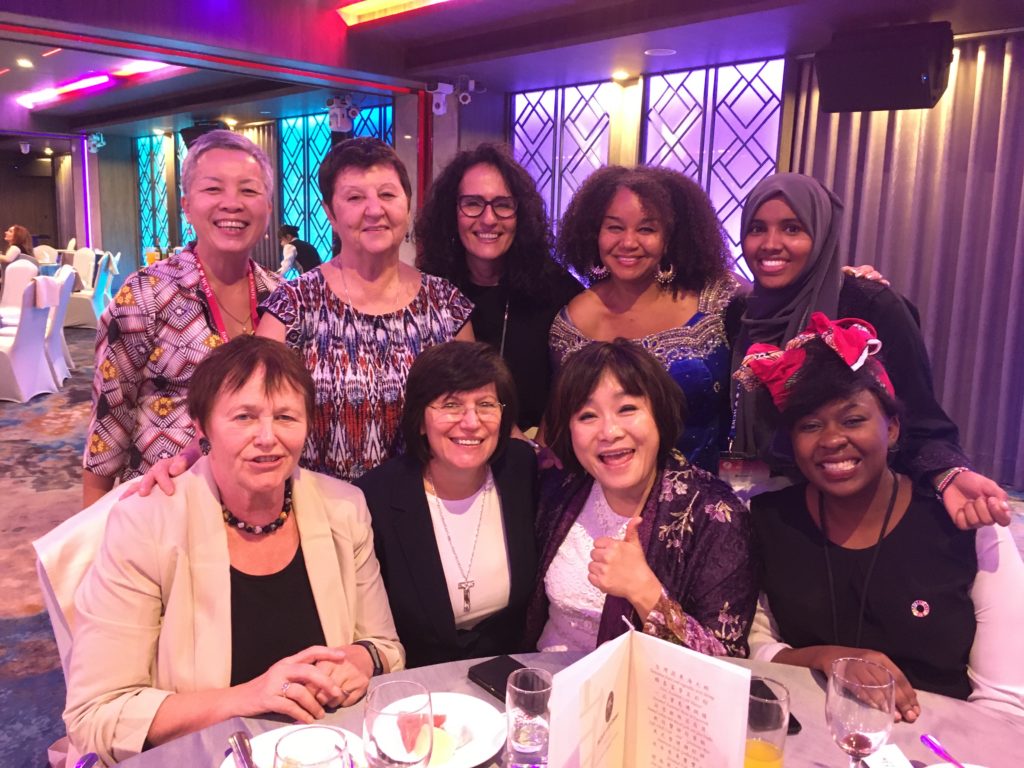 Hong Kong Activist Linda Wong brought attention to police brutality and intimidation tactics in Hong Kong.  She stressed the importance of naming the perpetrator of political sexual violence, to break the silence of victims and for survivors to continue to question power.  GNWS announced the launching of the Global Helplines Project with the aim of gathering support for a database of accurate helplines and creating a website with all available resources for women fleeing violence worldwide. The network invited everyone to stop by their booth and share information about national, regional and continental services equipped with appropriate skills and resources.  They aim to create a complete, accurate and reliable listing of every helpline in every country, so a website can be launched to offer digital resources that can be accessible to anti-violence movements around the world.

The Panelists discussed emerging issues addressing child safety on social media, migrant women’s safety, institutional abuse and girls’ ability to excel.  The discussion was a reinforcement of the issues our SI President’s Appeal projects aim to address for the next two years.  Wei Shuan Chang, the founder, and CEO of ‘Womany Media Group’ said: “I have a dream that one day girls are not afraid to be excellent!”  That brought to mind our SIA ‘Dream It Be It’ programs and I was so proud to be a Soroptimist in that room filled with international advocates who dedicate their lives to ending violence against women.

The Gala Dinner offered us an opportunity to hear traditional Taiwanese music, participate in an aboriginal dance, and network with other outstanding participants. Speaking with a friendly attendee, Biki Chan, a judge who came to the conference from Taipei, I learned that 50% of the judges in Taiwan are women. She was eager to learn about SI’s advocacy work.

On the second day of the conference another keynote speaker, Yalitza Martinez, the Oscar-nominated Mexican actress, discussed ways of using the arts to stop gender-based violence, prevent sexual harassment in workplaces, change opinions and raise funds.  She emphasized the importance of breaking the silence on human rights violations, using education as our strongest tool. The use of art in activism was also highlighted.  I was moved by Yalitza’s conviction in standing for your dreams – “stay strong until you achieve them, get out of your comfort zone” she said. Overcoming negative comments and trusting in her ability, she successfully entered the media world where there was no one like her.  Her confidence shone so brightly and I was glad to have a chat with her at the VIP dinner where I mentioned our SIA Live your dream programs and asked if she might be willing to inspire our winners at the next Spring Conference in our Camino Real Region in California. 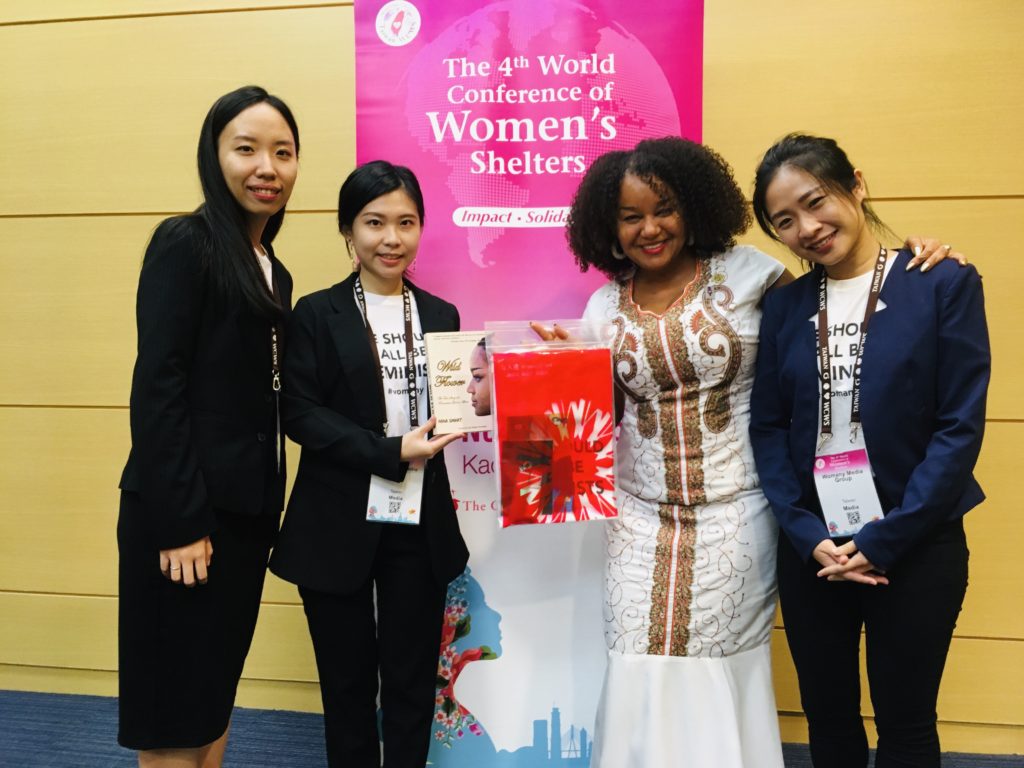 Congolese activist Christine Schuler Deschryner, City of Joy co-founder, discussed her experiences and spoke about DR Congo’s safe shelter transforming pain to power.  The many workshops organized throughout the day included ‘Men’s Role in Ending Violence Against Women,’ ‘End early/child and forced marriage in emergencies, disaster and humanitarian settings,’ ‘Housing innovations for domestic Abuse survivors’ and more.  I also attended a workshop where I learned about the challenges of reaching women survivors in India.  The speaker emphasized women’s resistance to go to shelter homes, admission and living conditions concerns as well as the social status of residents of shelters across the country.  Another captivating presenter was from Alberta’s Council of Women’s Shelter and he brought our attention to the questions that are being asked: “why does he abuse?” instead of “why doesn’t she leave?”   The speaker addressed prevention strategy highlighting how men have no idea, whilst women have long lists on how to protect themselves.  The shift must be from ‘why’ should men be involved to ‘how’. This approach is relevant to our SI work as we partner with organizations that involve men in their strategy of ending violence against women.

I was honored to have a ‘Meet the Author’ event (Nina is author of Wild Flower – The True Story of a Romanian Girl in Africa) at the Taiwan Coalition Against Violence (TCAV) booth, the organization that invited me and co-sponsored my participation for 4WCWS.  It offered a wonderful opportunity to speak about the various SI projects that support women’s shelters in my Camino Real Region.  Whilst signing copies of my books, I also shared about the safe house I’ve been supporting in Sierra Leone where women who are at risk of FGM are protected from those who are forcing them to undergo the harmful traditional practice.  The challenges experienced by activists I work within West Africa are not so different than those shared by the many attendees who work to protect women in other parts of the world.  The judge, Biki Chan, brought her colleagues to learn more about the legal instruments we use at the international level to end FGM.  I was happy to meet a Soroptimist from the Netherlands, Marieke Ruinaard, who was encouraging everyone to share information for GNWS Helplines Project.

Speakers shared shelter experiences from Taiwan, Singapore, Nigeria, India, the Netherlands, Canada and the United States of America.  There were success stories like those shared by Urban Research Institute from New York City and one common problem most service providers have – funding – and Rashida Manjoo spoke about human rights, bringing her expertise as UN Special Rapporteur on Violence Against Women.

I participated in the final plenary titled  ‘Equality and Economic Empowerment’ (Watch HERE), where I spotlighted the plight of women facing FGM in Sierra Leone and the importance of education in the process of ending this human rights violation. First, I highlighted the need for the economic empowerment of women to be redefined for the Sierra Leonean context.  I work directly with activists who stand firmly against the harmful traditional practice of FGM.  Our mission is to end FGM and that means that the Sowes, the powerful women who do the cutting during the ritual of initiation into the women’s secret society, is directly affected when the practice stops.  FGM is a business in Sierra Leone. The concept of women’s empowerment is directly connected with the practice of FGM, not only economically but also culturally and politically.  Redefining what women’s empowerment means is the first step.

I also spoke about the critical need to work together as we break the silence on FGM.  Educating women, including those who do the cutting, about the harmful effects of FGM proved successful.  Involving men as well as traditional and religious leaders has been an important step in ensuring that FGM is no longer taboo. Addressing child marriage together with FGM, engaging in intergenerational discussions debunking the benefits of FGM are critical. Working together to ensure that the women who abandon the practice have alternative ways of earning an income is key in rural Sierra Leone.  I offered examples of successful stories stemmed from our vocational center.  SI Downey and other clubs in my Camino Real Region have contributed for the past eleven years to projects that economically empower women and girls in Sierra Leone.

Be Bold!  Be Dangerous! – Eve Ensler

The final keynote was given by Eve Ensler, who encouraged everyone to “raise the vibration” and work to end violence against women.  “Be Bold!  Be Dangerous!” Eve encouraged us, stressing the importance of collective work to have a real impact.  We danced together, people from 100 nations, encouraging billions to rise for the campaign to end rape.  Taiwan’s Minister of Foreign Affairs, Dr. Joseph Wu gave closing remarks assuring us that Taiwan stands firmly with us to end violence against women.  Chi Hui-Jung, the Chairperson of GNWS and CEO of GOH thanked all of us for coming to Taiwan and for making the conference a success.  We were encouraged to carry the spirit of solidarity back to our homes and make a real impact on our work around the world. 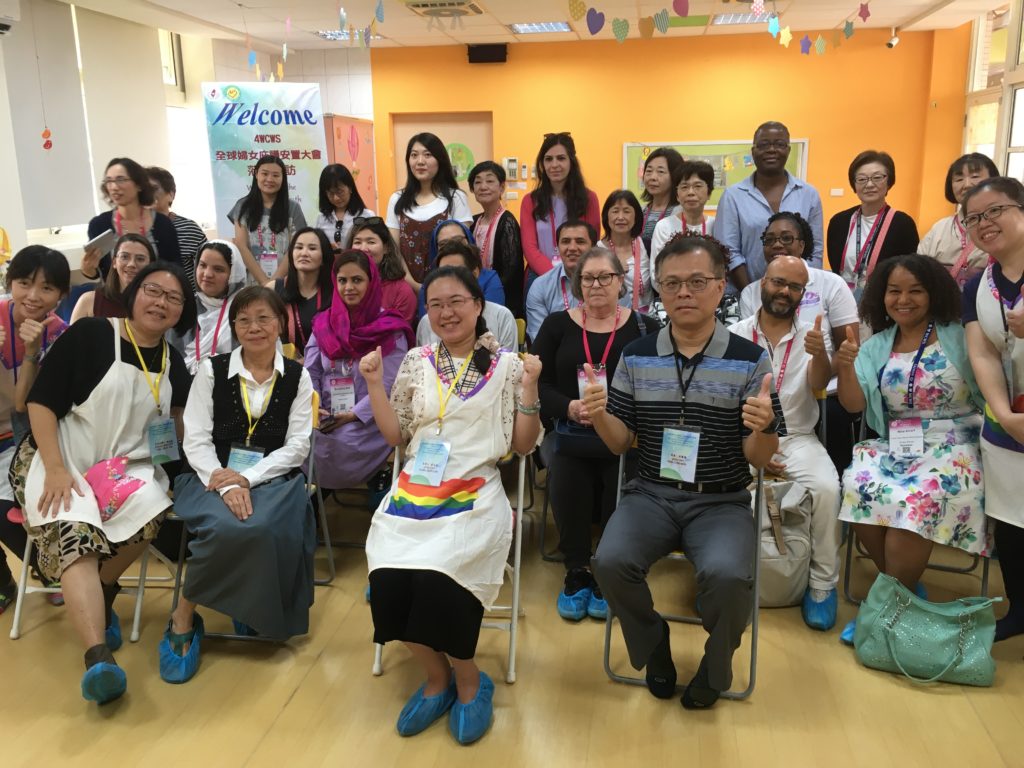 The last day of the conference was spent on a Study Tour.  There were eight options for attendees to choose from that included several projects sponsored by the Garden of Hope Foundation around Kaohsiung. I visited the Child Daycare Center where the staff showed us the facility and explained the importance of government funding for public run programs.  Seeing grandparents participate in the raising of their grandchildren, understanding the cost related to this social service and having a better idea of how families of lower-income can afford quality care for their children made the tour interesting.  The last afternoon was spent sightseeing the Kaohsiung Harbor from a ferry ride, enjoying a Taiwanese lunch at Pier 2 Art Center then climbing the hundred-plus stairs to the British Consulate at Takow.  It was refreshing to exchange views with other conference participants outside of the Kaohsiung Exhibition Center after spending three empowering days listening to life-changing information.

Many of the attendees are already preparing for CSW64 where we will meet again at the United Nations Headquarters in New York in March 2020. There, we will continue the conversation and work in solidarity to find more effective ways to make a lasting impact and end violence against women so there will no longer be a need for shelters”.