The very first Dutch professor in Human Rights Education (HRE) in the Netherlands, Felisa Tibbitts, held her inaugural speech at the Utrecht University this week. As SI President, I was very proud to attend as I am proud that Soroptimists made this new chair possible!  As Soroptimists, we focus on the SDGs and the fight for Human Rights and empowerment for women and girls. This chair of HRE was funded by a legacy of Soroptimist Carla Looman and put in place in close cooperation with the Utrecht University and Soroptimists of the Netherlands. Professor Felisa Tibbitts is now an honorary member of SI Club Haarlem in the Netherlands. Over a hundred Soroptimists came to witness the inauguration and congratulate Felisa. 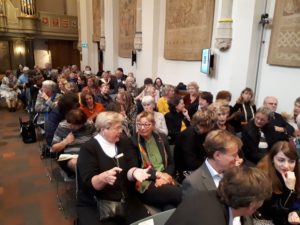 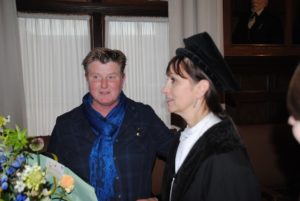 The new Dutch government wants to strengthen civic education, with an emphasis on the rule of law.

Here, a professor jointly put in place by Utrecht University and the Soroptimist International women’s organization might be of help.

In her inaugural lecture this week, prof. dr. Felisa Tibbitts spoke about the importance of human rights education, but also about its nature and objectives. “Human rights education locates itself within struggle, beginning with the personal but often linking up to wider social change processes”. According to Amnesty International, it can be considered a “deliberative, participatory process aimed at empowering individuals, groups, and communities… Its goal is to build a culture of respect for and action in the defense and promotion of human rights for all”.

The very first chair in human rights education in the Netherlands has a special history. It is funded by the Dutch Soroptimist Union, with over 3,200 members and 100 clubs in the Netherlands,  Surinam, and Curaçao, through the legacy of Soroptimist Carla Atzema-Looman. Prof. Tibbitts is based at SIM (the Netherlands Institute of Human Rights) within the Department of Law, Economics, and Governance at Utrecht University and is also affiliated with University College Roosevelt.

In her inaugural lecture, professor Tibbitts recognized the efforts of the Soroptimists to promote girls’ and women’s empowerment for over nearly a century through over 1200 clubs worldwide. Today, this illustrates many of the ingredients of a successful social movement: leadership, courage, self-education, stamina, strategy, and solidarity. Such efforts have brought about changes on the legal front, the work front, and the home front.

Professor Tibbitts said that through riding “the surf” of the international human rights movement beginning in the 1990s, HRE has “proliferated, experimented, differentiated and has also come to be localized in thoughtful ways.”  HRE is recognized in United Nations policies, is a part of school curriculum in 83 countries and is expanding in different areas of professional training, including law enforcement officials, civil servants, teachers and other professional groups. Wherever HRE is implemented it needs to pay attention to ideology, context, constituency, and locale (Bajaj, 2011).

Tibbitts believes that HRE can serve as a strong pillar for upholding the international human rights movement. She proposed specifically that HRE can help to support, or “reclaim”, human rights in certain inhospitable environments.

In her inaugural lecture, Tibbitts also noted the exemplary efforts of the Working Group of Social Work Trainers in the Netherlands, which issued a Manifesto in 2015 and has a strategy for strengthening HRE in schools of social work. She foresees research in this area, collaborating with researchers in academia and practitioners in the NGO sector, including the Soroptimists.

The lecture will be published online on the website of Utrecht University.