In September 2021, the 88th Session of the Committee on the Rights of the Child (CRC) started with limited public access and Non-Governmental Organisations (NGOs) were kindly asked to follow the virtual version. For the first time in 18 months, Chairperson Mikio Otani welcomed the present members and indicated the importance of the physical event. She continued with the message that due to the takeover by the Taliban, the review of Afghanistan had been postponed as no one is representing the country at the moment. Beside the opening and closing sessions, the fifth and sixth periodic report of Czech Republic and Poland were presented, while Eswatini’s and Switzerland’s progress was reviewed.

Mr. Cisse-Gouro, Director Human Rights Council & Treaty Mechanism Division and representative of the Secretary-General opened and closed the 88th session by welcoming the Committee’s decision to devote its next General Comment to the rights of the child and the environment, with a special focus on climate change. The fight against climate change must be considered a priority for safeguarding children’s rights, as climate change is an indirect threat for children, mainly the rights to life, sanitation, food, and water.

His tone quickly changed by expressing his worries of the Taliban’s return in Afghanistan. His office has already received numerous reports about violations of the international children’s rights. The cease of education for girls, the return of child soldiers and the abuse in general of human rights, etc. are unfortunately only the beginning.

Also, in 2020 more than 26,000 cases of violations had been reported. The most disturbing ones are the recruitment or kidnapping of children in armed conflict, numerous cases of murder and mutilation, girls suffering sexual violence and children being denied humanitarian aid. 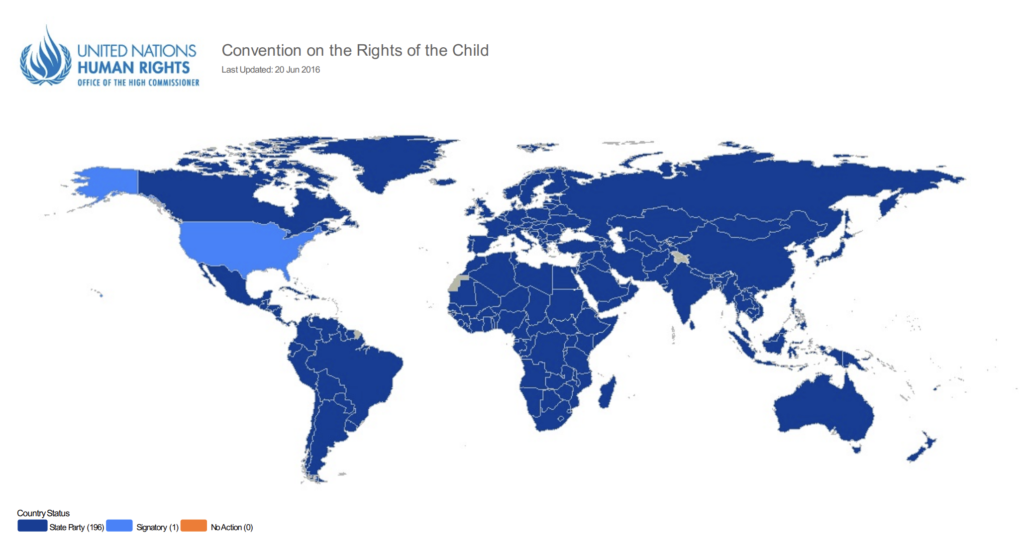 Map of ratifications of the Convention on the Rights of the Child. Image courtesy of OHCHR.

The experts welcomed new information on legislation adopted by the Czech Republic, especially around the National strategy for the Protection of Children’s Rights. They discussed the different obstacles to the legal reform, e.g. the persistence of corporal punishment, excessive placement in institutions – particularly Roma children – trials of children under the age of 15 (= criminal responsibility), child labour and child soldiers. In their concluding remarks, the Committee experts noted that the Czech Republic had attempted a variety of solutions but expressed their hope that the delegation would pay closer attention to Roma children, children with disabilities and migrant children.

Numerous measures leading to a significant improvement of the living conditions and development of children have been taken since the previous reviews.

Policies aimed to strengthen the family:

The delegation was asked additional questions about several issues, including the situation of children in the legal system, corporal punishment, children with disabilities, institutionalisation, adoption, and foster care.

Switzerland’s federal system is a complex system and the responsibility for children’s policy rests primarily with the cantons and municipalities. This means that in some cases local, tailor-made solutions are available for children, although these same measures don’t always exist on the federal level. Switzerland has a good track record when it comes to child rights, but there are always area’s which need improvement.

The Swiss federation needs to pay more attention to improve the:

In December 2019 a working group for the alternative care has been created and a new platform named “Casadata” had been set up to provide data on children staying in alternative care. At the end of 2022 there will be a full report on this topic. Also, regional mediation centres have been organised and now the creation on federal level is a priority for the Swiss authorities.

Closing day: Mr. Cissé-Gouro welcomed the physical presence of the Committee members and stakeholders. Furthermore, he pointed out the importance of the experts to continue monitoring children’s rights worldwide to make sure that no child is left behind. Working on a new general comment with a provisional working title of children’s rights and the environment, with a special focus on climate change as well as working on children’s rights in the increasing digital environment.

The 89th session of the Committee is scheduled from 17 January to 4 February 2022 and shall review the reports of Croatia, Cuba, Cyprus, Djibouti, Greece, Kiribati, Madagascar, Netherlands, and Somalia.

Read more about the 88th Session of the CRC, please click HERE.