“The New York Times article “Why America’s Black Mothers and Babies Are in a Life-or-Death Crisis” by Linda Villarosa inspired the NGO Committee Status of Women meetings in New York in May, 2019. Just recently we heard the case of Tammy Jackson, a black woman locked in a cell in a Florida prison, who was forced to give birth alone. She began contractions and yelling to officers for help at 3 a.m. on April 10, according to a local newspaper. However, more than four hours had passed when an officer called the on-call doctor who arrived three hours later. By then Ms. Jackson was already with the baby in her arms. It was reported she was at term, officers were aware of her pregnancy and the birth was neither sudden nor premature. “This lack of maternal care puts mothers and babies at risk, and reflects the wrong in the system” argued Ms. Amani, Community Midwife and organiser from Southern Birth Justice and member of the National Black Midwives’ Alliance.

Maternal care has been a neglected subject in the political arena in the United States. Recently the Center for Disease Control (“CDC”) and Prevention Report “Pregnancy-Related Deaths, United States” showed that about 700 women die annually in the U.S. from pregnancy-related complications. Black and Native American women are three times more likely to die than white women, and black babies are twice more likely to die than white babies. “Black women we don’t get to be rescued and often we are seen as a threat” stated Ms. Amani as she narrated her own story.

Even more devastating, the CDC reported in 2017 that just about 60% of maternal deaths might have been prevented. Common causes of maternal deaths are heart conditions, infection, hemorrhage, cardiovascular disease and embolisms. Several of these health problems are today possible to detect, monitor and treat. It’s inexcusable that numerous women are dying from them. Social factors such as financial conditions, lack of access to health care, social inequality and exposure to racism all undermine health. The report illustrated the results of those factors: black women are more likely to suffer a shortage of health-care, less likely to own insurance and more likely to experience discrimination from health-care providers, contributing to high maternal mortality rates (MMR). 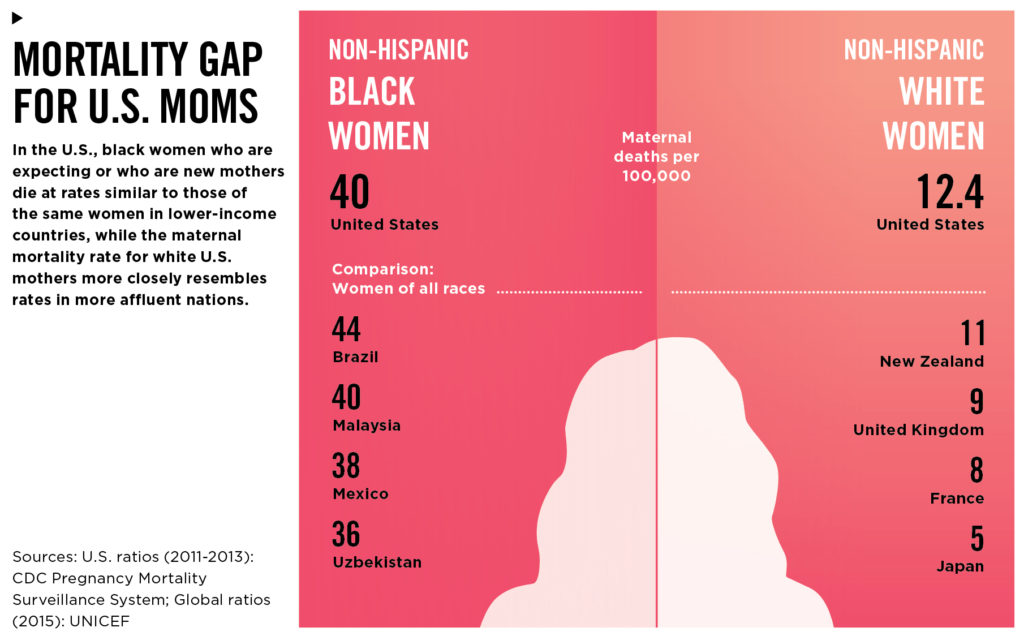 One could argue that the U.S. lacks a comprehensive maternal system, that covers pre-and post-pregnancy, equipped with adequate personnel to fulfil the needs of reproductive, sexual, maternal and newborn health.  Trained midwives have proven to be a cost-effective approach to reduce MMR argued Ms. Knutsson, Chief, Sexual and Reproductive Health Branch, UNFPA. Midwives are usually within the community and provide closer care to pregnant woman and newborn babies even several weeks after birth; “a midwife is about accompanying the women, a medical professional is about treatment”.  Ms. Knutsson argued that a customary model of care that features midwives would considerably cut back maternal and infant death rate in the US. However, many U.S. insurance companies don’t cover the costs of a midwife and, in most cases, it is not affordable for many women. Within the U.S. midwives solely cover 8% of total births whereas, in the UK, planned births, from home deliveries to complicated C-sections, are attended by midwives under the National Health System. The MMR in the UK is 9 deaths per 100,000 live births, in comparison to 14 deaths per 100,000 live births in the U.S. (2014). Though having a midwife is not the only factor affecting maternal mortality it is a strong one. There are major gaps reflected in the outcomes for pregnancy-related conditions, that are extremely treatable, however still causing the death of women and babies, and unfortunately this pattern will continue if they’re not recognised and managed”.