by Dawn Marie Lemonds, a participant in the NGO Forum September 1995

“Not one of the 50,000 people at the opening ceremony of the 4th World Conference on Women (4WCW) in Beijing 1995 could ever forget the power of voices singing together at the largest event ever held on women’s issues. The Beijing Declaration continues to be a “guiding document” articulating the 12 critical issues impacting women of the world.  The parallel NGO conference, themed “Look at the World through Women’s Eyes” was attended by 45,000 women in the nearby city of Huairoa and presented over 2000 scheduled events in the 10-day period. 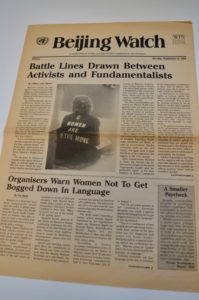 Over 100 Soroptimists participated in both the 4WCW and the NGO Forum – lead by then SI President Patsy Daniels, SI Leaders and UN Representatives. Soroptimist leaders served as advisors to the Government delegations, particularly on Human Rights issues and Education.  At the NGO Forum, Workshops were presented by Soroptimists on topics such as ‘Women in Prisons’, ‘Women’s Rights in Kenya’ and various workshops on education.  Ironically, the issue of Human Trafficking was hardly on anybody’s minds in 1995 and only mentioned as an ‘afterthought’ in the Beijing Platform for Action (PFA) – although there were a few great workshops on the subject. 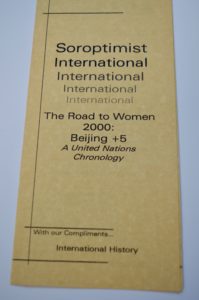 The two conferences focused on Poverty and recognised that a lack of education, lack of paid employment and violence against women are key contributors to the issue. In 1995, there were few elected leaders in power, a great disparity in all services for women, and many countries had prohibitions against women owning property or even making decisions for their children. Technology was revealed in 1995 as something that would positively impact the world and microcredit loans were being given to women to remediate poverty. I attended over 50 workshops and programmes, including an 8-hour tribune on ‘Violence Against Women’, a workshop on ‘Muslim Women’s Experience of Violence’, an amazing play from the Philippines on human trafficking, and I soothed my soul at a singing workshop with a gospel group from Washington DC. My life was forever changed. 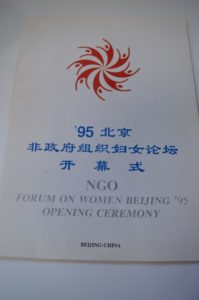 Fast Forward to Beijing + 25 and the world is now focused on the UN’s Sustainable Development Goals (SDGs). Since 1995, the Commission on the Status of Women (CSW) annually addresses the progression toward areas of the PFA and the SDG’s related to gender. What is better- what is worse now?  It is affirming that due to constant and persistent NGO presence- gender is now being addressed. Much to the surprise of many, UN Women was formed in 2010- giving women a seat at the BIG UN Table. Poverty reigns as a predominant issue, human trafficking has gained a front seat of concern, climate change, overpopulation, food security and violence in society are also gaining recognition as key issues affecting women. There has been some progress made for women in education, a slight increase in elected women leaders, and some economic advances. Yet, there is much to do. We, as Soroptimists and as citizens of the world must continue our own work and partner with like-minded organizations through advocacy and service. We must “keep on moving forward, never turning back, never turning back” (Reference Holly Near song, sung at the Opening Ceremony).”