“Many years ago (too many for me to remember but probably almost 20) I attended a Soroptimist Convention at which a young woman spoke about the horrors of trading in human lives, how little was known about it and how this needed to be shouted from the rooftops. I have to admit this was the first time I had heard that this type of activity was operating around the world but especially in the United Kingdom and Europe. Like myself, many Soroptimists went away to take this message back to our clubs.  But like all messages of this significance, it takes a long time to permeate. And it took an even longer time for this terrible trading to be recognised at the United Nations (UN).

Ten years ago at the Soroptimist International (SI) Convention in Glasgow 2007, we learned more about what was actually happening in a workshop on ‘human beings, not for sale’ and listened to speaker Eve Richings, an international journalist.  Eve told us harrowing accounts of child trafficking in Gabon and Benin, where parents living in extreme poverty were unable to feed their children so handed them over to someone promising them a better life, only to find that they had been traded on into some form of slavery. Soroptimists had already started to work on this issue and were able to tell their stories at the workshop of how their clubs and members were responding, many by raising awareness in their communities, others by providing support for the rescued survivors. However, even as Soroptimists were leading the field in raising awareness of the extent of human trafficking and the many forms it took, many communities denied it was happening ‘here’. 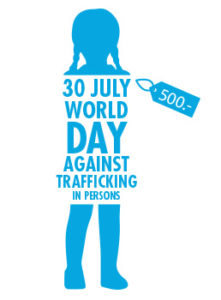 It wasn’t until The Global Plan of Action to Combat Trafficking in Persons was adopted in 2010 by the UN, urging governments worldwide to take coordinated and consistent measures to defeat human trafficking in all its forms, that it seemed the world was listening. The UN plan called for integrating the fight against human trafficking into the UN’s broader programmes to boost development and strengthen security worldwide.

In 2013, the UN Member States adopted a resolution which designated July 30 as the World Day against Trafficking in Persons. It declared that such a day was necessary to “raise awareness of the situation of victims of human trafficking and for the promotion and protection of their rights.”

The UN resolution also stated that trafficking in persons, often women and children, constitutes an offense and a serious threat to human dignity and physical integrity, human rights, and development. Despite sustained measures taken at the international, regional, and national levels, trafficking in persons remains one of the grave challenges facing the international community, which also impairs the enjoyment of human rights and needs a more concerted international response. Unfortunately, the illegal trading of human beings has overtaken drugs in the listing for levels of monies made by organised crime.

According to a 2016 UN report, Global Report on Trafficking in Persons, women and girls tend to be trafficked for marriages and sexual slavery, while men and boys are typically exploited for forced labor in the mining sector, as porters, and as soldiers. It also states that refugees from war and persecution are particularly vulnerable to becoming victims of human trafficking.

So what have Soroptimists been doing to support the fight against trafficking? An enormous amount at a local and regional level, too much to mention every action which has taken place. But just a flavour of the work indicates how committed Soroptimists are to eradicating this illegal trade.

In 2014, a collaborative alliance was formed, the Marin County Coalition to end Human Trafficking, with Soroptimists playing a major role in raising awareness across the local communities around the San Francisco Bay area, engaging others in recognising, reporting and prosecuting perpetrators. This alliance continues with Soroptimists prominent in its leadership.

Photo: STAT! Soroptimists at one of the many awareness raising events since 2011

In the south of California, STAT! was formed in 2011 in response to Soroptimist members’ wish to get involved in the fight against human trafficking in San Diego. The acronym STAT! (with an exclamation mark) was chosen to emphasize the urgent need to protect women and girls from human traffickers. 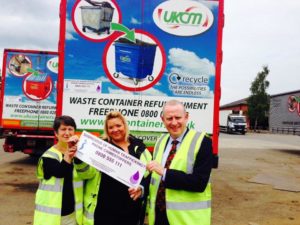 Working with truckers or long distance lorry drivers to raise awareness and to ask them to alert official agencies is part of the action taken by Soroptimists in the UK, USA, Nigeria and other countries. SI Northwich and District recently responded to a company UK Container Maintenance who wanted to put awareness raising stickers on their fleet of 16 new container lorries. The stickers were provided by the Purple Teardrop Campaign. 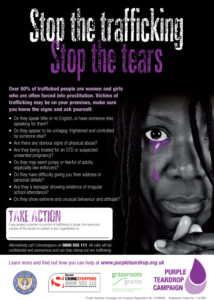 ‘Stop the Trafficking, Stop the Tears, Free Them from their Tormented Years’ are the poignant words written by a member of SI at the outset of a campaign against human trafficking that began in 2008. The Purple Teardrop Campaign in the UK provides awareness-raising and resources for Soroptimist clubs and others and is supported by SI Poole, as well as many other Soroptimist clubs, helping survivors by campaigning energetically to end this horrendous activity. Regular newsletters are sent out which offer information regarding the activities of the campaign as well as action that Soroptimist clubs have taken. 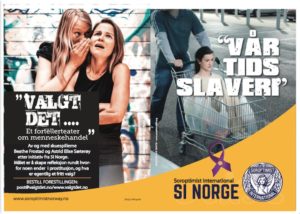 Photo: SI Norway’s awareness raising theatre piece “What do they Write Home about?”

Soroptimists in Norway have taken a creative approach to awareness raising, with a major project giving victims and survivors of trafficking an opportunity to tell their very personal stories through performance. Working with two female actresses Beathe Frostad and Astrid Elise Sæterøy launched a storytelling theatre to raise awareness amongst young people. “We started out by wanting to enlighten young people on human trafficking, by getting the performance of a play on the subject entitled “What do they Write Home about?” included in the ‘Cultural Schoolbag-Programme’; a programme which offers sixth form college students a variety of cultural experiences, such as concerts, plays, visits to museums and exhibitions and classroom visits by authors and artists. During the Soroptimist year 2016/2017, there were 37 performances, 32 of which were organised by Soroptimist Clubs and the Union of Norway.

Where are we at?

In 2018 Soroptimists continue to raise awareness and support victims and survivors, but has there been any progress?  There have been some prosecutions of perpetrators, we see news reports of women and children freed from their entrapment, survivors are speaking out; so there are small steps being achieved to give women and girls freedom and dignity, but we have to recognise that as long as there is still extreme poverty, conflict, and oppression, there will still be much work for Soroptimists to do both in their local communities and at national and international levels.

Sustainable Development Goal 8 (SDG8) calls on the world to “take immediate and effective measures to eradicate forced labour, end modern slavery and human trafficking and secure the prohibition and elimination of the worst forms of child labour, including recruitment and use of child soldiers, and by 2025 end child labour in all its forms.”

Let us all make sure we hold our own Governments to the promise they have made.