All the Italian clubs were united in lightening up monuments, town halls, barracks of the Carabinieri, and more, with the orange colour, and in sharing the message of the initiative with the slogan ‘DECIDO IO’ (I decide).

With this campaign the Soroptimist members wanted to raise awareness and encourage widespread commitment, particularly since the outbreak of COVID-19, where data has emerged showing that violence against women and girls, particularly domestic violence, has increased.

To give support to the anti-violence centres and to the connected shelters, the Italian Union has sponsored ‘Le Clementine Antiviolenza’ – the fruit produced by rural women in Calabria. The proceeds of a “Clementine Antiviolenza” sale has raised funds for the D.i.Re (Donne in Rete contro la violenza), the first Italian Association that gathers 80 independent women’s centres and shelters against violence in Italy.

With the project Le Clementine Antiviolenza the Italian Union aimed: 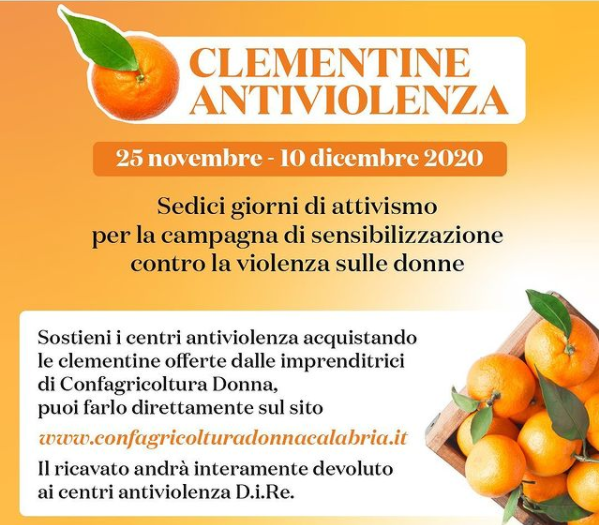 The second initiative wanted to be a symbolic reminder that there is a safe place to turn to for women that suffered violence. So the barracks of the Carabinieri that host the 150 Rooms of one’s own  that have been set up by Soroptimist, have been illuminated with the orange colour.

To conclude the 16 Days of Activism campaign on 10 December, 2020, the Union of Italy invited its clubs to attend a virtual conference by Prof. Tanya Hernandez on the topic: ‘Feminism in the time of #BlackLivesMatter – a conversation across borders’.

“To mark the 16 days of activism for struggle violence against women, Soroptimists have mobilised around the world at both the international and national, level levels.

Interesting webinars were organised by Sharon Fisher, SI President 2019-2021, covering some of the six themes of the ‘Road to Equality’ President’s appeal. In each of the 121 countries where Soroptimists are present, numerous events (poster campaigns, ‘orange’ lighting of many official buildings, publication of key messages on television, film, radio, print and social media) have raised awareness the general public, political decision-makers or social actors, to the different forms of violence to which women are victims and to the urgent need to act in order to eliminate this violence.

In France, Bernadette Schmitt, President of Soroptimist International France 2020-2022, and her team, surrounded by members of all the clubs of the French Union, organised several informing video conferences. 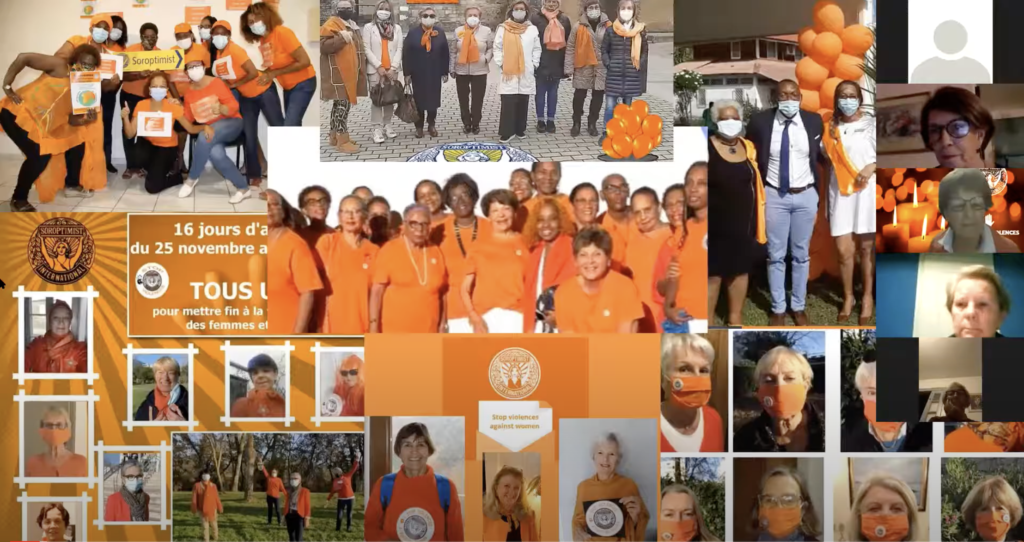 Soroptimists Oranging The World presented in a video conference held by SI France.

With the objective of helping to “Understand, Defend, and Undertake” to better fight against all forms of violence with which women are confronted, speakers competent in their field (lawyers, magistrates, doctors, psychiatrists, presidents of associations of the Rights women) spoke on complementary themes:

Many Soroptimist clubs are developing action and lobbying programs to support associations that help victims of violence, and continue to raise awareness of these important issues beyond the 16 Days campaign.”