“There is no place for child labour in society. It robs children of their future and keeps families in poverty.”

Throughout its 100-year history, the ILO has been working to regulate child labour. One of the first ILO international treaties was in 1919 and set to limit the minimum working age to 14 years old (Convention No 5). During the next few decades, the ILO worked to abolish child labour, with mixed results. It took the ILO almost 55 years to mark its next big success in their fight against child labour.

In 1973, the ILO Convention No 138 established the minimum age for all working children in all sectors, employed or not. The Convention applied rules for all children under the age of 18, but exceptions were possible for various sectors depending on the workload. Only in 1992, after the adaptation of the UN Convention of the Rights of the Child in 1989, did the ILO launch an International Program on the Elimination of Child Labour (IPEC), which marked the start of a much-needed mindset change by its Member States.

During the 1990s, governments, employers’ and workers’ organisations identified the eliminations of child labour as a fundamental right at work and because of the worldwide attention and concerns, the “Worst Forms of Child Labour”, ILO Convention (No 182) and Recommendation (No 190) were adopted in 1999. This Convention complemented the Convention No 138 (minimum age) and outlined the agreed international standards. By 2001, two years after the launch of the Convention No 190, 100 Member States had ratified – a unique result in the United Nations history!

Statistics show that in the last 20 years, almost 100 million children have been removed from child labour, however it is still present in today’s world in multiple ways. We are down from 246 million in 2000 to 152 million in 2016; the fight to eliminate child labour has to continue. 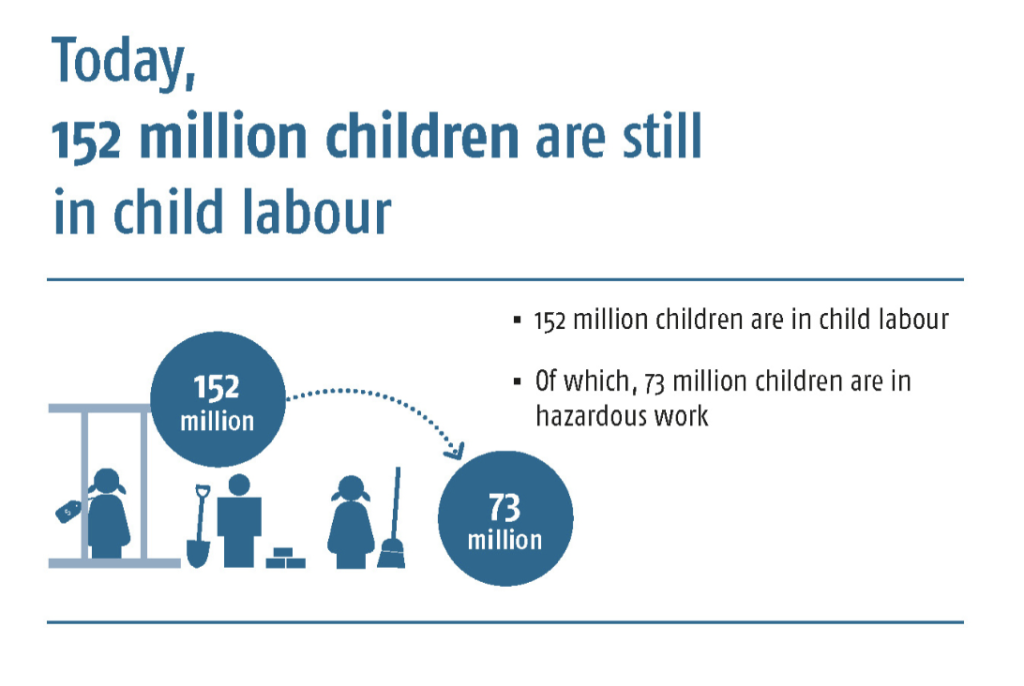 Progress across continents is irregular. Today, 152 million children between the age of 5 and 14 are still forced to work in hazardous circumstances. Almost 50% of these children live in Africa, followed by Asia and the Pacific. This means that the other half of these children live in many developed countries and economies in transition (e.g., Eastern Europe). Also, there is a disproportion between girls and boys. Girls are more affected by forced labour than boys. In the sex industry, 99% of the victims are girls and in the others sector 58% are girls – an issue that the COVID-19 pandemic has only exacerbated.

Roughly three quarters of the 152 million children work in agriculture, and half of these children are exposed to physical danger or work in situations dangerous for their health and even lives. These worst forms of child labour include slavery and similar practices, child pornography and prostitution, drug trafficking, to only name a few.

Why does child labour still exist?

The causes of child labour are complex, and it has become an international problem (e.g., growth of sex tourism and trafficking of children across national boundaries).

There are two different explanations why child labour still exists despite a good deal of public concern. On one hand, there are issues linked to the family and community pressures: poverty, inadequate or lack of schooling, habits, social and cultural traditions. On the other hand, we see the side of the employer/family business exploitation: low cost, easy to manage and or manipulate, the “nimble fingers” argument, alleged irreplaceable skills of child workers etc.

Is this an unsolvable problem?

No, the general conscience exists but there is still a lot of work to be done.

Finally, in July 2019, the General Assembly of the UN declared 2021 as the “International Year for the Elimination of Child Labour” and the ILO was asked to take the lead in its implementation by taking immediate and effective actions.

A landmark achievement was reached in ILO history when in 2020 an “International Labour Standard” achieved universal ratification acceptance by all 187 Member States. This universal ratification of ILO Convention No 182 of 1999 means that all children now have legal protection against the worst forms of child labour.

The ambitious goal of SDG 8.7 can only be achieved when Member States work together, in and outside their borders. The ILO/IPEC joined forces with Alliance 8.7, a global partnership that aims to encourage legislative and practical actions to eradicate forced labour, modern slavery, human trafficking and child labour around the world.

By demanding the ratification of the Convention No 182, the action to tackle child labour in law and in practice has been put in motion. Member States who ratify the Convention No 182 are obligated to amend their national laws and policies in line with the requirements of this Convention. Member States commit to taking immediate, time- bound measures to prevent the worst forms of child labour, to withdraw children from forced labour, and to provide all of them with the necessary rehabilitation and care, with a special focus on girls.

The fact that the UN finally declared 2021 the International Year on the Elimination of Child Labour, offers the opportunity to strengthen a global movement against child labour and brings light and focus to this dark matter (#EndChildLabour2021).

This International Year of 2021 will create the foundation for the V Global Conference on Child Labour (VGC) which will take place in 2022 in South Africa. During that conference, all stakeholders will share their experiences and will make tangible commitments towards ending child labour in all its forms by 2025.

With continued momentum comes hope. Let’s keep the pressure and have the freedom to say that the work in the next 4 years will have changed the world.