A blog by Christine Johnstone

“Presented by Madre, the theme was Addressing Political Concerns, this was a panel event, allowing 4 strong progressive rural women the chance to tell their story, and advocate on behalf of their communities. 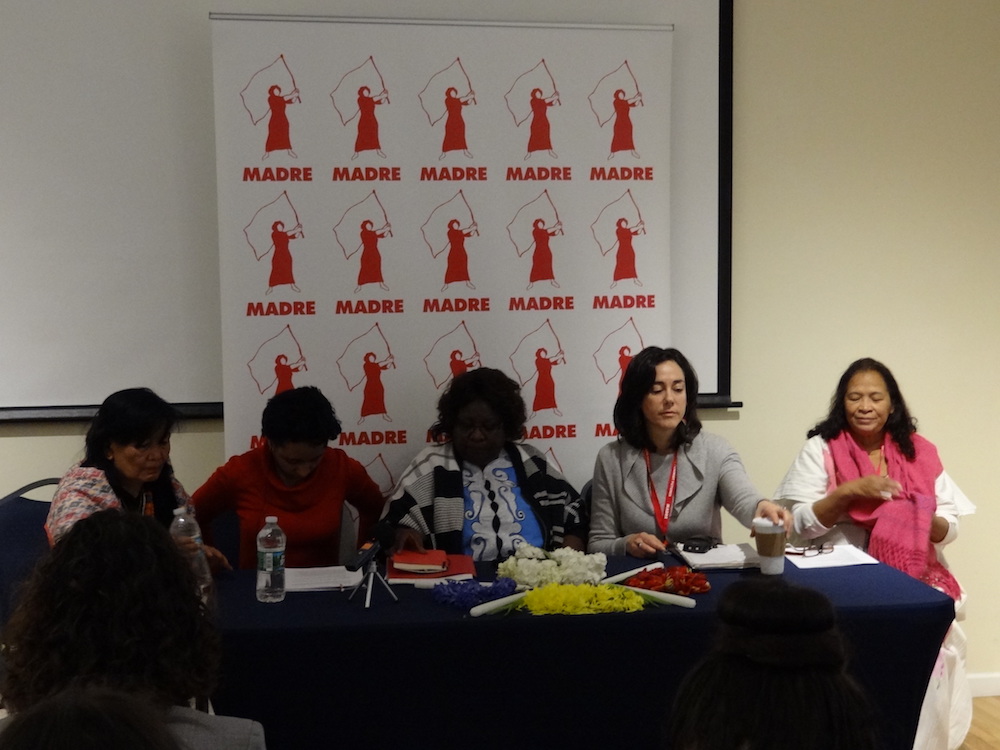 Panellists were:
Rose Cunningham from Nicaragua, Lucy Mulenkei from Kenya, Aminatu Samira from Cameroon
and Yasso Kanti Bhattachan from Nepal. They say a picture tells a thousand words, well the stories by the 4 panellists created an inspirational image, as they told us their stories and how they are inspiring women in their communities.

Rose Cunningham, a Misito Indigenous leader and an expert in popular education, international labour law, and the rights of migrants, refugees and displaced persons is the founder and current Director of Wangki Tangni (Flower of the River”)

Rose is currently the Mayor of the Municipality of Waspam, in the North Atlantic Coast of Nicaragua. Rose spoke to us in the Indigenous Miskito language. Never underestimate the power of a Woman. Nicaragua is on the border of Honduras where there is a trafficking issue with drugs and women, this was the catalyst which saw Rose want to have a voice and to raise her voice, Rose consulted with elders who encouraged her, and she ran as an Independent in the Council elections.

Rose spoke about building her organisation from the ground up. She is working with women to free the women from oppression, creating a significant space for women to empower themselves, to learn about Human Rights and their laws, enabling them to run for office. There is now another woman on her Council. Never underestimate the importance of grass roots unity.

Lucy Mulenkei from Kenya is a Maasai women who is the chairperson and coordinator of the Indigenous Information Network Kenya (IIN). She has coordinated training and capacity building for Indigenous rural nomadic pastoralist and hunter gatherer communities. Lucy advocates at the regional and international level for the recognition of the rights of Indigenous Peoples. Lucy provided us with stories of rural and indigenous women who carry the whole work load; build the house, shelter, care, provide, whilst the men are away tending to cattle. Lucy maintained that we should be working with the women to ensure they know their rights, and the structure of the government and laws which exist for them.

Aminatu Samira – Cameroon is from the Mbororo Pastoralist Community in Cameroon, and is a young indigenous women’s rights activist at the local and International level. Aminatu participated in the CSW Youth Forum in March 2017. Aminatu reminded us that opportunities to improve access to education, and personal development are required immediately. That women cannot vote or often do not know how to vote. Aminatu told us that in Cameroon there has been no school for 2 years, that girls are dropping out of school, schooling is a basic right which they are being denied. There needs to be training for rural women to understand how Councils and Governments operate, training on their rights, exposure and participation in conversations which will provide mentoring and leadership skills, with this type of training, women will be better represented in national councils and Governments. Empowering women through education, is the key role to develop herself and her community. Young Women want to be Agents for Change.

Yasso Kanti Bhattachan – Nepal, belongs to the Thakali Indigenous Peoples, whose ancestral land is in the Southern Mustang in the Trans-Himalayan Region of Nepal. Yasso is Vice-chair of the National Indigenous Women Forum (NWF). Yasso is a regional council member of the Asia Pacific Forum on Women, Law and Development (APWLD). Yasso informed the audience, that in Nepal, women now occupy up to 40 % of local government positions. In 2015 there were constitution changes which provided for a quota of 33% for women, this has been successful with women now occupying approximately 41% at the local level. This sounds great but on the flip side Yasso told us that the quota system has been misused by officials, were the wife of a man already holding office will be nominated and elected to office, and therefore denying the grass roots women a voice and also the chance to be elected for office. Although the women elected may be indigenous, they do not speak out or on behalf of the indigenous women, they are either required to speak as per their political party which they belong to, or are afraid that they may lose office. There is a need to groom young women and prepare them to stand for office at the next election. In Nepal, the government has implemented some CEDAW changes but are not being held accountable for the implementation of these changes. In Nepal young women are being left behind.

In closing, the stories from these grass roots women, working towards implementing change to Indigenous women are similar in nature across many countries. The indigenous women need to have access to learning about their Human Rights, the CEDAW conventions and the Government structure of their countries. Civil society needs to keep pressure on Governments to implement the UN instruments such as Human Rights and CEDAW. In some countries we are seeing Human Rights activists labelled as criminals and terrorists. All the speakers spoke about the immense knowledge of indigenous plants and medicines which Indigenous women hold this knowledge is not being recognised or acted upon by Governments or the Economic community”.