Friday 15 March, United Nations Conference Room A, saw an excellent event sponsored by Soroptimist International and the Mission of Romania. 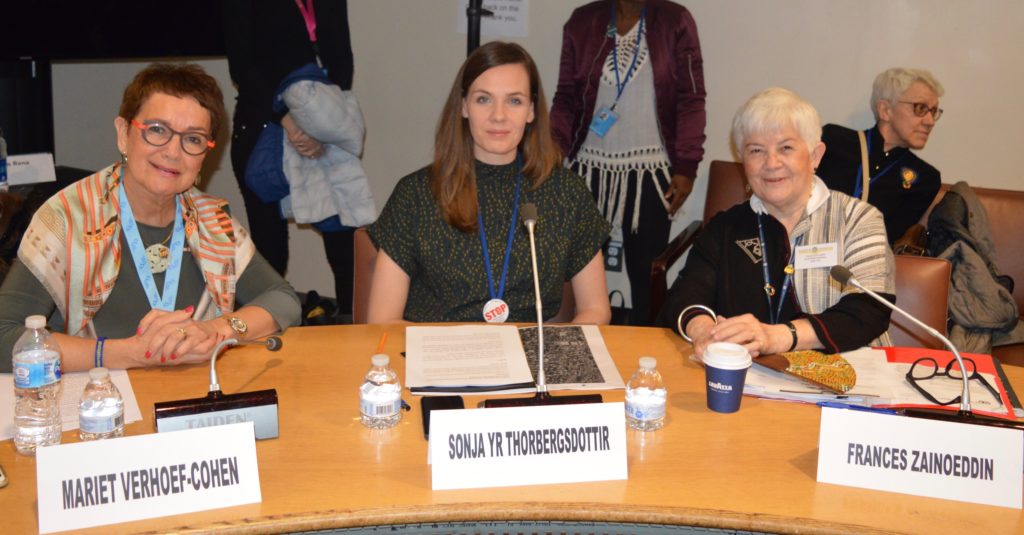 The aim of the event was to exchange ideas and discuss best practices for inclusive approaches to social protection to ensure no woman or girl is left behind.

Opening Comments were given by Ms. Aurelia Grațiela Drăghici, Vice-minister, National Agency for Equal Opportunities between Women and Men of Romania and the event was moderated by Linda Witong Abrams – Special Advisor to Advocacy, Soroptimist International.

Ms. Aurelia Grațiela Drăghici spoke of Romania’s commitment to preventing and combating domestic violence,saying she was happy to show progress detailing the recent ambitious reform on legislation of domestic violence. Drăghici spoke of the introduction of emergency interventions, hotlines and protective shelters for domestic violence survivors. A big step forward in 2018, the national agency for equal opportunities for women and men launched a campaign on rape at the start of the 16-day’s of Activism campaign, piloting a project for advocating this kind of support service at national level. Drăghici also spoke of projects in different stages of development, including one involving 8 counseling centres and another developing a network of 42 protected shelters – emergency protection for victims and legal/psychological support. Her message was that domestic violence survivors were not alone in this fight, and that domestic was not just a problem for Romania,  and together there was a common desire to promote women rights and women’s protection.

H.E. Mr. Francis Kai-Kai, Permanent Representative of the Republic of Sierra Leone, bringing gender balance to the panel, spoke on the role of men and boys in promoting gender equality, discussing HeForShe and the work taking place in ‘New Sierra Leone’ reconstructing attitudes and behaviours and empowering women and girls by changing mindsets, through the education of women and girls and men and boys. Speaking of the difficulties in mainstreaming gender quality, he said this was sometimes encouraging and often frustrating, although timely and necessary. He spoke of gender inequality, sex and gender-based violence through the war years, in the ’90s particularly and also of structural inequality and entrenched discriminatory laws customs and practices. Through education and inclusive ownership in problem solving, he spoke of a reinvention – addressing structural inequalities, designing protection against discrimination; laws covering these areas, and empowering women, and how they were witnessing positive effects from this. Gender equality cannot be achieved without men and boys it is a partnership and he spoke of his commitment to the vision explaining he was lucky – he was given the possibility to follow his own dreams in school – however his sisters were not, instead they were committed to early marriages. We should be optimistic – change the narrative, and the new Sierra Leone would become unshackled from the old.

Sister Winifred Doherty, Member of Congregation of Our Lady of Charity of the Good Shepherd spoke of male privilege, saying we are a long way from the realisation of the rights of the girl child. Females of all ages face vulnerabilities no matter where they live, from birth to 18, they are particularly vulnerable to human rights violations. Doherty spoke of the low value of the girl child and the many harmful practices such as FGM and forced marriage, and how women and girls are affected disproportionately by many global challenges such as climate change, conflict and migration. She spoke of cultural/sociological/traditional norms; with patriarchy as a root cause.

Mariet Verhoef-Cohen, President Soroptimist International, President of Women for Water Partnership discussed the work of the Women Water and Leadership, the Soroptimist International President’s Appeal, in empowering women and delivering concepts that encourage equal opportunity, career development and economic stability and security for women and their families. Verhoef-Cohen discussed the work in rural locations, often in situations where women have little influence over natural resources such as land and water, and there may be weak service provisions, such as in Sarawak, (Malaysia); Stara Zagora, (Bulgaria); Nakuru County, (Kenya) and in those affected by disaster such as Sulawesi and Lombok (Indonesia). In this scenario Soroptimist International works with the membership on-the-ground, utilising their experience and local knowledge, partnering where necessary with governments, agencies, civil society and community groups to ensure the ongoing success of projects and the sustainable empowerment and influence of women.

Sonja Yr Oirbergsdttir, Icelandic Federation of State and Municipal Employees, spoke on the Icelandic Equal Pay standard, a new tool that ensures equal pay for equal work within a workplace. Women’s activism commenced in Iceland in 1975 with ‘The Women’s Day Off’ when 90% of women refused to work, cook, look after children on 24 October. In Reykjavik. 25K women demonstrated in the city. This was the same year as the United Nations dedicated to the cause of women in the world. Influencing the election of the first woman President of Iceland in 1980, and the formation of Foundation of the Woman’s Alliance influential in the 1980s and 1990s. In 2016 and 2018 women in Iceland again protested, leaving work at 3pm to protest against the gender pay gap and demand a more equal society.

The Equal pay Standard took four years to make and was the first of its kind in the world. To date the findings have been positive overall and transfers the responsibility of equal pay from the individual employee over to the employer. It has to be said that some findings have shown that women are paid more than men in the same job!

In 1990 in Iceland, Parental leave introduced the Father’s programme. Mothers taking the first 3 months of maternity leave followed by the father taking the next 3 months, and a choice of mother or father taking the following 3 months. This is to ensure the father has time with his sibling at an early stage which can then develop into teens an onwards. Following discussions of successes, Thorbergsdótir said Economic liberation Iceland still had a long way to travel!

Frances Zainoeddin, International Federation on Aging, NGO Committee on Aging, and UN Representative for Soroptimist International, spoke of Empowering Older Women, noting the limited discussions during this years’ CSW focusing on this demographic. The average age of population continues to rise – there is a need for policies that reflect changes in populations – by 2050 over 2 billion will be over the age of 60. Women will be 53% of the world population over 65, and 80+ is the fastest growing – time to rethink policies. She said older women’s concerns and needs and priorities are largely ignored, modernisation, new technologies all impact older persons; barriers to land and property; older women suffer from violence and abuse – a lifetime of discrimination and that we need to work collaboratively and create an intergenerational cycle of policy. Is aging being celebrated? or is the case that the thinking is that money shouldn’t be wasted on them? Older women deserve autonomy and independence – freedom to choose for themselves – dignity. If we are serious about eradicating poverty – we need to empower women from the cradle to grave.