I want to build a school. A blog by Sian Kent, SI Bangor and District in North Wales.

“I want to build a school” – these were words spoken by Albert Mwansa (a local teacher), as he stood on a bare hill overlooking the village of Mkushi in Central Province, Zambia.

At this time (2001), Zambia was suffering a devastating AIDS epidemic. One in six adults was living with HIV and six hundred and thirty thousand children were AIDS orphans. UNICEF estimated that more than a quarter of a million children were out of school and forty-seven per cent of those who were in school did not complete their primary education. Since 2002 the state provided free basic education, but in reality the government had little money to put towards education, and the cost of uniforms, books and meals was prohibitively expensive for poor families.

There were further barriers to education in rural areas; children faced travelling very long distances to get to school. Additionally, as the family is considered an economic unit, the parents and guardians need the children to work – this also kept children away from school.

This was the situation facing Albert in Mkushi, a rural area where the main income came from farming. Albert was deeply concerned about the hundreds of local, poor children and orphans unable to access an education. He believed the only way to break the cycle of poverty was through education and so began his dream to build a community school. A school that would offer a place to any child that wanted an education.

After consulting parents, an old dilapidated school was rented and lessons began with 26 pupils, mainly boys. Some of the classrooms had no roof, pupils sat on the floor as there were no desks, no equipment or books and chalk was in short supply. The teachers, all men were volunteers. Eventually Albert on the third attempt, was given a piece of land by the local council on which he could build a school and so at last his dream could became a reality. 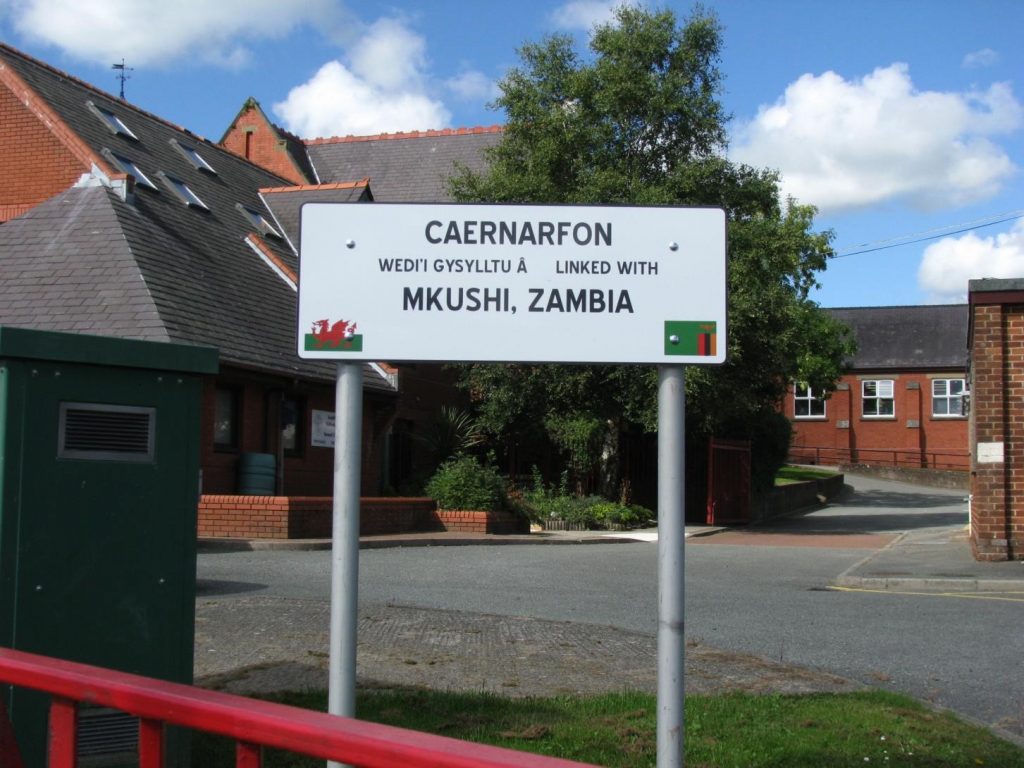 Albert’s companion at the time was Tony Foster, a teacher from Ysgol Syr Hugh Owen (YSHO) Caernarfon, North Wales (UK) who was in the area with a group of fourteen, year 12 pupils taking part in expeditions and working towards the Duke of Edinburgh Award. They had travelled to Mkushi, to have a break and spend the week doing community work. During their visit, the Welsh pupils made mud bricks, carried them on upturned benches and so began the first classroom block made up of three rooms. 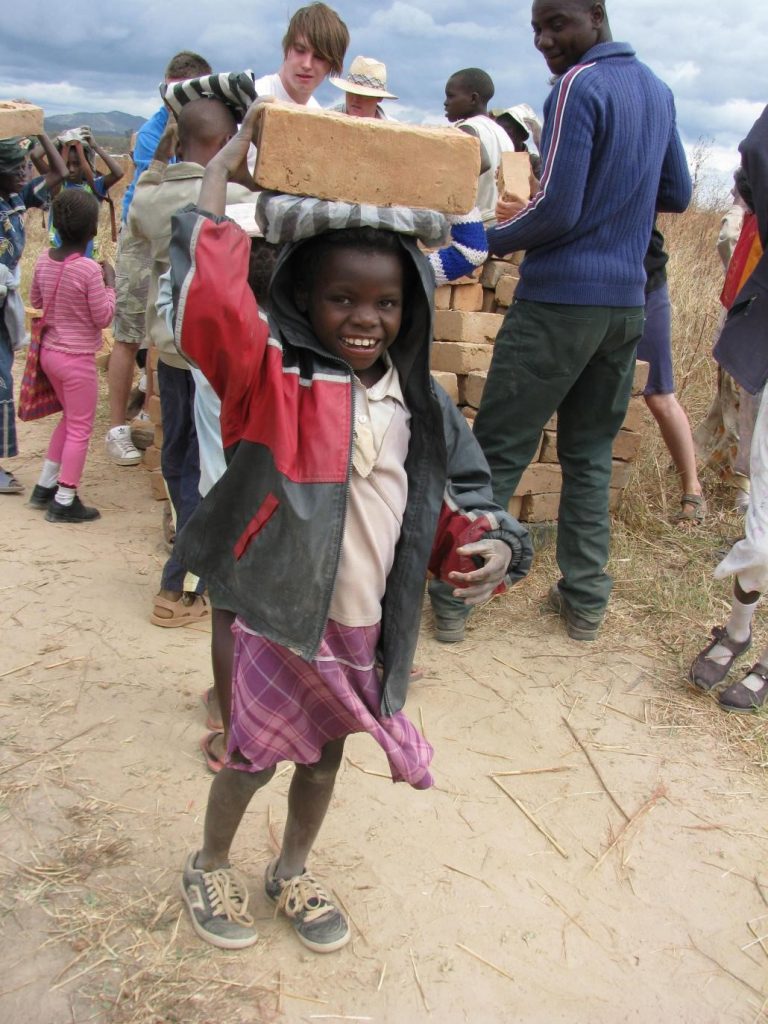 When they returned to Wales, teachers Tony Foster and Adam Williams decided they wanted to do more. They exchanged letters with Albert and here began a relationship based on mutual trust. A school would be built, but Tony and Adam laid out a few founding principles.

My name is Sian Kent, I am a member of SI Bangor and District in North Wales and Tony and Adam were my work colleagues. One day in the school staff room a group of us were shown a photograph of Itala School as it was being built and so began a conversation about what was happening in Zambia. During the conversation there was talk of needing to encourage girls to attend school and a need for female teachers which would be a role model for the girls in the community.

Having been interested in hearing about the school, suddenly I was taking far more notice as I felt training female teachers was something we, the Bangor Soroptimists could do. The members of SI Bangor embraced the project to sponsor a local woman so that she could complete her education and hopefully go on and train as a teacher. Also supporting a project that would ensure free education for poor children. 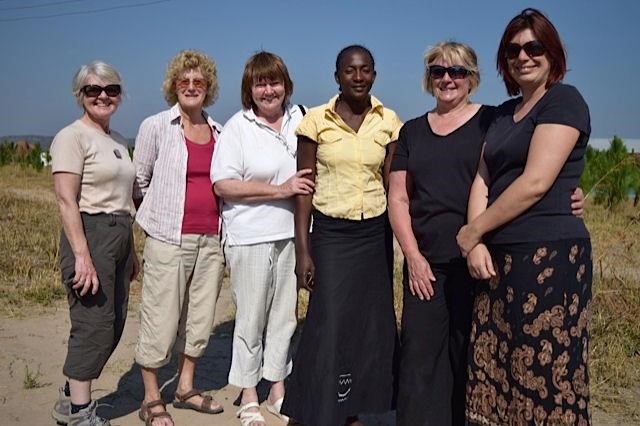 Sian Kent third from the left

My first visit to Mkushi and Itala School came in 2006 when I gave a local woman sponsorship from the members of SI Bangor .This was the first contact between Mkushi and SI Bangor. Since this initial meeting our relationship has gone from strength to strength. Predictably, Bangor members have arranged fundraising events over the years. Events that include selling Reindeer food at Christmas (wild bird seed) craft stalls, cake sales, sponsored walks and much more.

Much to everyone’s surprise, when the school opened there a demand for adult classes, especially from the women of the community. At last they could access an education, which they had been denied in the past. Education gave them the confidence to start small enterprises, be it selling in the market, making clothes or hairdressing. They no longer feared dealing with money as their numeracy skills improved. Education empowered the women, giving them the confidence to voice their ideas. Meetings held at the school gave the parents an opportunity to voice their hopes and aspirations with regard to developing Itala School and their children’s future. Setting up small enterprises enabled the women through their own efforts, to move on, climb out of the poverty trap and have a future for themselves and more especially, their daughters.

The first group of pupils from Ysgol Syr Hugh Owen went out in 2001, however since then, more groups from YSHO and other schools, both in and out of the area, have travelled to Mkushi on a regular basis. They spend a week at the school, where they sleep in traditional mud huts, with no electricity, no carpets, no furniture, no en-suite, and no running water. Water needs to be collected in buckets and pumped from a well that has been built on the school land.

The visiting students cope well, enjoying the experience. Their time is spent carrying sand and bricks to complete the school buildings; painting outside or inside the classrooms; helping to build toilets, teaching the pupils; playing football, volleyball and netball with the pupils. The visiting students shop in the local market for their lunches; visit the local hospital and spend time communicating and interacting with the school pupils, enjoying the friendly welcome of the Zambian children. There is great interaction between the two groups as they discover what different lives they lead. Letters are exchanged between pupils from Wales and pupils at Itala each time a group travels to Zambia. Friendships are made, experiences shared and memories made that will last a very long time.

The visiting students notice that no one grumbles about going to school, in fact Itala pupils can be seen running so as not to be late. Their prize possessions are a carrier bag, a pencil and a book. Most get up early to do their homework and chores before school. Some go to work after school, or help on the farm. Visiting students will ask “Why are they so happy? They have nothing. Yet they’re always smiling”

One year, visiting Soroptimists from Rhyl discovered that the school football team, in spite of winning the local league, could only play away games. The school could not invite teams to play at Itala, because they did not have a first aid kit. The Soroptimist felt they wanted to support the team and so began to put together a first aid kit. In order to complete the kit they had to visit the local hospital and were told by the hospital manager the huge impact the school had had on the area. The pupils are taught health education, hygiene and aids prevention, which impacts on the health of the community. As a result of this education, the pupils understand the need and benefit of a first aid kit.

Since my first visit in 2006 there have been many changes. The original mud brick school has been pulled down, as termites had eaten the wooden supports which rendered it unsafe. There are now two blocks with three classrooms and one with two classrooms which is known as the science block. Each class room has been furnished with strong desks donated by International Rotary. Having desks makes such a difference to the pupils when they are in class. A toilet block has been built.

Today there are over 900 pupils at the school (50% of the population are girls) and about half are receiving a free education because of their financial circumstances. The academic success of the school is highlighted by the grade 7 examination results which for the past six years have been 100%. An enviable achievement.

The results reflect the hard work of the teachers and the pupils. All the sweeter when we are told that in a local literacy competition, pupils from Itala came first in each age group. Sweeter still, that two Itala pupils, both girls, attained the highest grades in the whole district in their maths examinations. One female pupil from Itala gained a place in the squad of the Zambian netball team.

In 2006 the Itala Foundation charity was set up and I was invited to join a group of trustees who have managed the development of the school and co-ordinated the support that has come from different directions. The success of the school is a real achievement. It would not have delivered but for the support of different groups working together, providing financial support which helps to pay the teacher’s salaries, the training of teachers and many other different projects. One Rotary group have sponsored the development of crop growing for the food project at the school and bringing electricity to the first classroom block. SI Rhyl has provided valuable text books which are essential for learning at the school.

SI South Caernarfon has sponsored a mature student who returned to Itala in her early twenties, to continue her education which had been cut short by the death of her father. The Soroptimists supported her as she moved to secondary school and achieved her grade 12. In spite of her difficulties and back ground, she gained a place at a nursing college and with continued support from SI South Caernarfon, she has now begun a three year training course to be a nurse. Once she is qualified her wish is to return to Mkushi and work as a community nurse.

The community of Caernarfon, the pupils and staff of YSHO, have been magnificent in their support over the years. A sponsored walk is now a regular fixture on the school calendar. In 2012 the charity received the Highly Commended award from the United Nations committee of the Welsh Government for its work in Africa. The charity was given a plaque which now stands proudly outside YSHO in Caernarfon, advertising the strong links between two communities dedicated to bringing education and a future to the next generation”.

If you would like to find out more, visit www.italafoundation.com
Or find us on Facebook at www.facebook.com/italafoundationschoolmkushi