“In 1995 at the Beijing 4th World Conference, Human Slavery/Human Trafficking was seen as ‘hardly an issue’, and yet, the practice was viewed to be a priority for many Soroptimists already working in this area through an International Quadrennial Project taking place in Thailand. The Soroptimist International Aids Mediation (SIAM) provided education and training to girls and women to support, divert and empower them from sex slavery to self-sufficiency. Thousands of lives were saved through this partnered project that still continues today and has expanded greatly beyond its original brief of seven villages.

As is always the case when Soroptimists join together with one vision, participation and support for this particular SI Project laid the foundations for the many local and regional campaigns and grassroots projects undertaken by Soroptimists worldwide, including several SI President International Appeals. Since 1996 Soroptimists have consistently joined other Non-Governmental Organisations (NGOs), and United Nations (UN) Agencies, in encouraging the formation of laws and conventions, such as the ‘2003 Palermo Protocol to Protect, Prevent, and Punish Trafficking in Persons especially women and girls’. This protocol, one of three to supplement the United Nations Convention against Transnational Organised Crime, inspired local, state and country laws and policy around the globe. 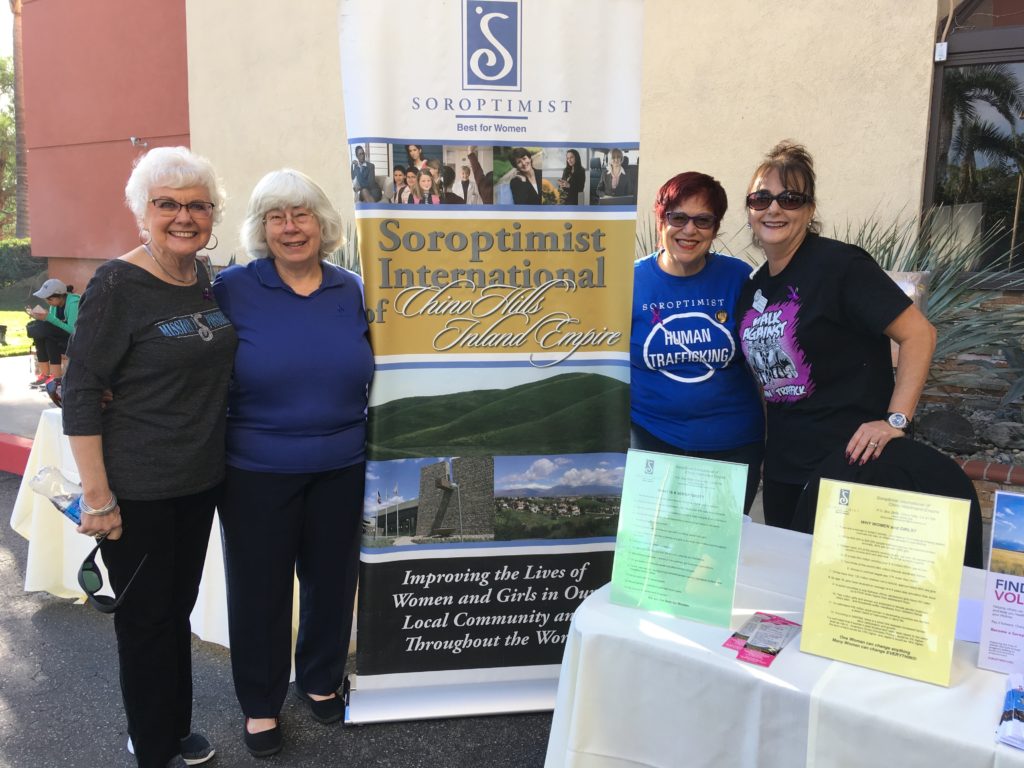 Yet, the problem of Human Trafficking has exponentially grown, together with advancements in technologies and online communication, civil wars, climate change, and increased movement of people, increase risks, exacerbating vulnerabilities, and also increasing opportunities for traffickers. The United Nations (UN) 2030 Agenda identifies human trafficking as one of the world’s great challenges, with targets detailed in many of the 17 Sustainable Development Goals (SDGs). As analysis of the data on trafficking victims over the last 15 years, shows that women and girls together continued to represent more than 70 percent of detected trafficking victims. An estimated annual $150 billion industry (International Labour Organisation), with estimates of 40 million victims of modern slavery*1 in any given day in 2016 (International Labour Organisation and the Walk Free Foundation).

Soroptimist work using Awareness, Advocacy, and Action at grassroots, national and international levels, participating in many of the UN events related to Human Trafficking, including those in Vienna and Bangkok, and in the forthcoming UN Crime Seminar in Osaka, Japan, planned for 2020. Commitment to human trafficking advocacy and activity by the Soroptimist membership is significant within all four SI Federations, and partnerships and participation in coalitions is increasing in a number of countries.

Examples of work include – Soroptimist have supported Safe Harbor Laws in the US, to address inconsistencies with how children that are exploited for commercial sex are treated, requiring states to enact laws that both protect and assist children; Coalitions of support such as STAT (Soroptimists Together Against Trafficking) in San Diego California, which provides services, programmes, and advocacy, also supporting Vanguard University’s Global Center for Women and Justice. Soroptimists support survivors of Human Trafficking in many countries through shelters, transition living, sanctuaries, and on the street, and there are many powerful projects taking place that aim to increase awareness such as Valgt det…which engages through performance work rooted in real-life experiences of human trafficking survivors in Norway; and a new Federation project set up by the Soroptimist International of Great Britain Federation partners with Chora Chori and aims to raise £105,000 over 3 years to provide education and vocational training, and a sustainable 30-bed facility for trafficked and displaced Nepali children. The ‘Abolish Slavery Everywhere Forever’ campaign saw tens of thousands of people participate in A21 Walk for Freedom, in over 50 cities and 50 countries in October this year. Soroptimists were part of this event- with the goal of eradicating human slavery by 2021. (the 2020 event will take place on 17 OCTOBER).

What can we do

*1 Modern Slavery – Different countries use different legal terminologies, however, “modern slavery” will include human trafficking, slavery and slavery-like practices such as servitude, forced labour, forced or servile marriage, the sale and exploitation of children, and debt bondage (Walk Free Foundation).