Using data from Credit Suisse Research Institute’s ‘Global Wealth Databook (2019)‘, and the 2019 Forbes billionaire list, Oxfam has published its annual global inequality report ‘Time to Care: Unpaid and underpaid care work and the global inequality crisis’.
The 63-page report argues that economic inequality is out of control. In 2019, the world’s billionaires, only 2,153 people, had more wealth than 4.6 billion people. The richest 22 men in the world own more wealth than all the women in Africa. These extremes of wealth exist alongside great poverty. New World Bank estimates show that almost half of the world’s population live on less than $5.50 a day, and the rate of poverty reduction has halved since 2013. 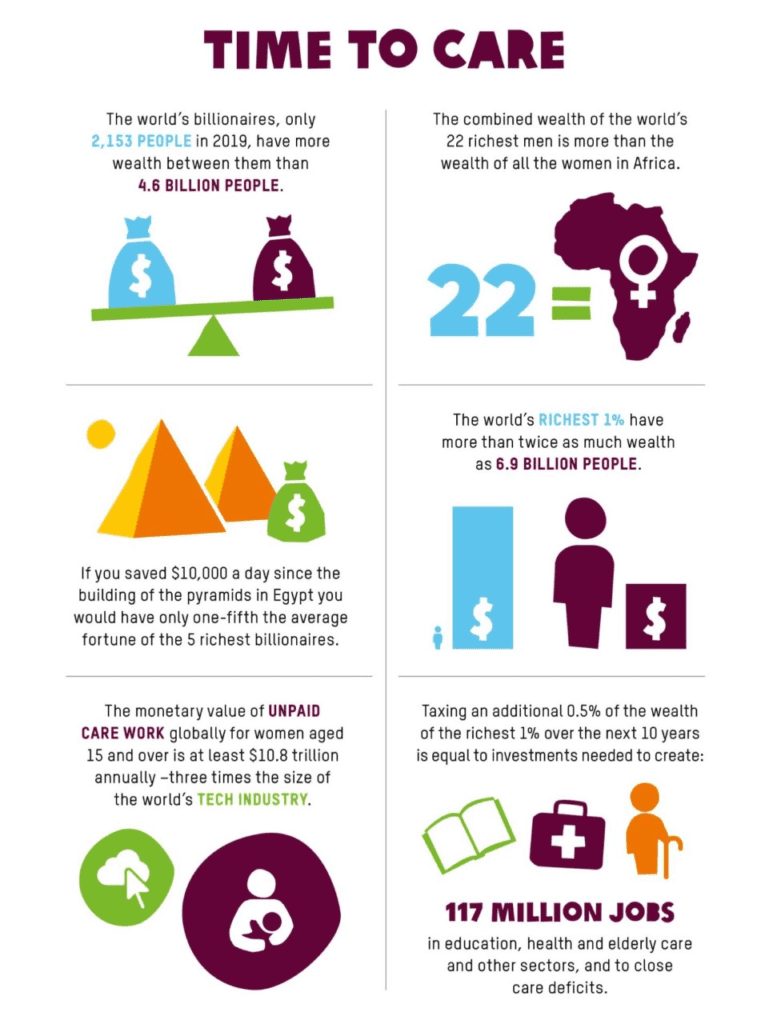 The Oxfam report highlights that the world leaders are not doing enough to address the widening gap between the poor and the rich. The report also argues that part of the economic inequality is built on gender inequality because “women are supporting the market economy with cheap and free labour and they are also supporting the state by providing care that should be provided by the public sector […] This unpaid work is fuelling a sexist economic system that takes from the many and puts money in the pockets of the few [..] Both the dramatic level of economic inequality and the looming care crisis can be tackled, but it will require concerted efforts and bold policy decisions to mend the damage done and to build economic systems that care for all citizens,” (Oxfam, Time to Care, 2020). Oxfam urges that governments work to build national care systems, provide free public services and increase taxes on the wealthy.

The reports urges six actions:
°Invest in national care systems to address the disproportionate responsibility for care work done by women and girls;
° End extreme wealth to end extreme poverty;
° Legislate to protect the rights of all carers and secure living wages for paid care workers;
° Ensure that carers have influence on decision-making processes;
°Challenge harmful norms and sexist beliefs.”