To close the annual United Nations (UN) High-level Political Forum (HLPF), a Ministerial Declaration is negotiated and agreed. This Ministerial Declaration is meant to assess progress on, and challenges to, achieving the Sustainable Development Goals (SDGs), as well as highlight concrete actions that will accelerate implementation efforts. As the 2030 Agenda and the Sustainable Development Goals are a global agenda that is for “people, planet and prosperity”, finding global agreement on how to do that is vital. Many national policy decisions on climate, the economy, and human development can have international ramifications; if all people are to benefit from sustainable development and no one is to be left behind, multilateral collaboration is vital.

This year, member states struggled to find agreement. All negotiations require compromise, but sometimes excessive compromise can result in an outcome document being vague and having very little in the way of substance. Unfortunately, this was the case this year with the 2021 HLPF Ministerial Declaration. Twice a proposed final draft was presented to UN member states during the negotiation period, and twice it was rejected by a minority of states. In the end, a compromise was found, but some paragraphs were voted on instead of the document being agreed by consensus. At the UN, to ‘agree by consensus’ is the aim of negotiations. When there is a vote on certain paragraphs in a resolution or Declaration, it means countries could not agree on those issues. While this does happen, it is not a common occurrence and can indicate significant disagreement between states, and a break-down in multilateralism and good will in negotiations.

SI UN Representative, Frances Zaineoiddin, who follows the HLPF for SI, is clear in her stance, saying “the Ministerial Declaration lacked specifics, ambition and boldness necessary to deal with the damage caused by the pandemic.”

Key issues which caused disagreement between states included gender equality, climate change, the territorial integrity of states and foreign occupation. In a world where women and girls of all ages – particularly those who experience multiple and intersecting forms of discrimination – are systematically discriminated against and are experiencing increasing rates of poverty, violence and human rights violations, all countries must unite to take action. Indeed, the Beijing Platform for Action, the Copenhagen Declaration, the Sustainable Development Goals, and other global agreements, already exist and map a pathway to achieve gender equality. Yet these agreements are becoming increasingly controversial. A key problem to finding international agreement is that many states are not willing to commit to, or carry out, the transformative actions needed to achieve a sustainable world, despite having already agreed that this is a good idea.

This problem of ‘a lack of political will’, has been an issue for decades. SI research carried out by Linda Witong, SI Advocacy Advisor, has identified that the need for increased political will has been discussed at the UN in relation to the environment and other issues since the 1970s. But now the world has reached a time of crisis. The combination of the COVID-19 pandemic, the impacts of climate change which are dangerously close to the point of being irreversible, and conflict and humanitarian crises across the world, threaten the possibility of creating a sustainable world. While global policy solutions are available, many states are refusing to enact them and create barriers to the multilateral cooperation needed to ensure gender equality, to protect the planet, and to eradicate poverty. Despite the UN Secretary-General, António Guterres emphasising how these issues, and in particular climate, are a ‘direct existential threat’ to humanity, UN member states cannot find the political will to act. 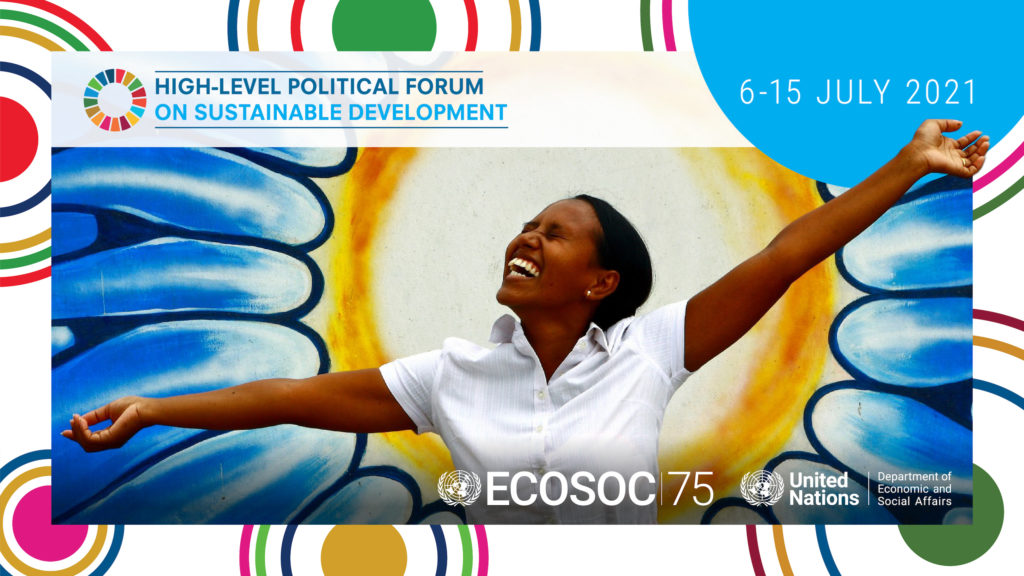 Soroptimist International was not alone in its disappointment with the Ministerial Declaration. The Major Groups and other Stakeholders Coordination Mechanism (which was integral to the adoption of the 2030 Agenda and represents civil society organisations, including Soroptimist International, at the HLPF), released a statement which said:

“This year’s HLPF has failed to come up with bold and transformative recommendations for action in a time when approximately 4 million people have perished due to the COVID-19 pandemic, close to 190 million have become sick, over 250 million have lost their jobs, over 1.6 million had their education disrupted and hundreds of millions more have already fallen into acute hunger and extreme poverty. It is inexcusable that during this world crisis Member States failed to agree on a strong, human-rights centered, transformative, action oriented Ministerial Declaration … This moment in time presents the HLPF with an acid test for inclusive multilateralism, political ambition and courage. HLPF must take a step forward from the usual intergovernmental rigamarole to make good on the promises of the 2030 Agenda.”

For SI and other civil society organisations being able to speak with one voice is powerful, and being a part of civil society coalitions at the HLPF which release statements like this one is critical. SI UN Representative, Bette Levy, who participates in the Women’s Major Group which contributed to the statement above, explains: “For civil society during the HLPF, the only way to make an intervention is to be an active member of one of these groups. For me personally, my membership in the Women’s Major Group since 2011, is one of my strongest bonds within the UN and has given me, and therefore Soroptimist International, a place to learn and grow, to keep up to date on current issues, and to be party to planning actions to ensure civil society organisations retain the right to meaningfully participate”.

While the final outcome of the HLPF was disappointing, it is still important to acknowledge the positives. In many ways we are fortunate to have a Ministerial Declaration at all – it may not be the Declaration the world needs, but last year there was no Declaration at all. This shows some progress in agreement between states, but we do have to ask ourselves ‘at what cost?’. Another positive take-away is that frequently it was individual states taking a hard-line stance which prevented the Ministerial Declaration being agreed by consensus. During negotiations, like Civil Society Organisations, most states negotiate in groups to give themselves a more significant voice and to pool resources. This year, groups could find agreement with each other, and it was a handful of individual states who refused to find a compromise that could work for everyone while affecting meaningful change to allow for sustainable covid recovery. The belligerent stand of these states on critical issues like gender equality and climate change, which the future of this planet depends on, should not prevent other states from taking the action needed. Taking meaningful action now depends upon what happens in households, in communities and in countries.

This is where civil society, including Soroptimist International, has another role to play. When action cannot be agreed at the UN, civil society can keep pushing for individual governments to take their own actions. Community-level programmes, like the ones SI Clubs undertake, also can have a big impact. For many years civil society has stepped in to fill the gaps made by states’ ‘lack of political will’, while this should not have to happen, it can continue and can support the achievement of the Sustainable Development Goals for the benefit of women and girls and all of humanity.