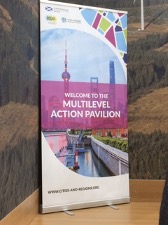 This session was organised by the International Council for Local Environmental Initiatives (ICLEI) World Secretariat, ICLEI Europe and UN Habitat. It was divided into three parts giving an insight into:

The Presidency convened the fourth High Level Ministerial Dialogue on Long Term Climate Finance, which was informed by the reports on the in-session workshop on long-term climate finance and the fourth (2020) Biennial Assessment and Overview of Climate Finance Flows. This dialogue included three panels on enhancing support for developing countries and realising the $100bn goal, supporting a financial system for a net zero and resilient future, and scaling climate finance to mobilise the trillions needed in developing countries. This session followed previous dialogues at COP20, COP22, and COP24.  The three panels focussed on the following:

First session: ‘From the Energy Crisis to Better Crops – How can Nuclear help to meet the Climate Challenges?’

Rafael Grossi, International Atomic Energy Agency (IAEA) Director General, was interviewed by Gillian Tett, author and Financial Times US editor-at-large discussed how the world could manage to address both the climate crisis and the energy supply crisis.

Key issues covered during the session:

In July 2021 in Geneva Switzerland the retailers H&M Group, Ingka Group (IKEA) Kingfisher plc and Walmart launched a climate change initiative – the Race to Zero Breakthroughs: Retail Campaign in partnership with the COP26 High Level Climate Action Champions and supported by the World Business Council for Sustainable Development.  Together they pledged their support to accelerate a movement in the retail industry to drive climate action and encourage other retailers to set out their plans to achieve 1.5 degrees aligned carbon reduction targets in accordance with the Paris Agreement goals.

It was noted that there are vast amounts of travel involved in retail, which covers all areas – food, technology, clothing and homeware.  Trade Associations have stepped up to support this initiative and help to accelerate the Race to Zero.

This event highlighted the launch of a new study on the impact of biofouling on GHG emissions undertaken by the Global Environment Facility (GEF) – UNDP – IMO – GloFouling Partnerships project and its Global Industry Alliance (GIA).  It covered the impact of biofouling on Green House Gas (GHG) emissions from ships and quantify savings of those emissions resulting from biofouling management measures, highlighting the full potential of biofouling management to contribute to decarbonising shipping in the short term. Biofouling also impacts on the drag of the ship resulting in the need for more fuel.  The aim of the study is to measure and address the issues concerned.

It was noted that the shipping industry was in agreement with the research.  Long term other approaches will be used.

Photo of the day 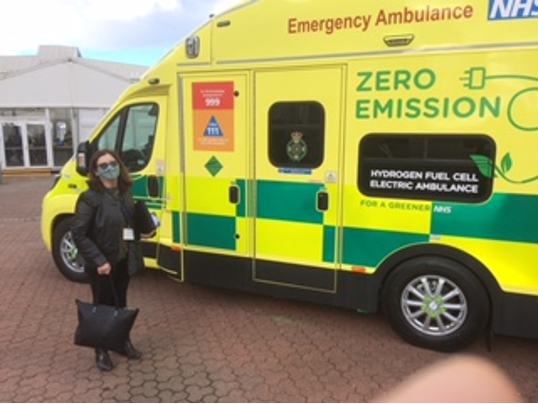 During energy day, hydrogen was highlighted as the way forward for vehicles as demonstrated in this hydrogen fuel cell electric ambulance.

First Session: Press Briefing – Breaking the Taboo: Why Diets Must Change to Tackle Climate Emergency – Food Produces one third of greenhouse gas emissions – 75% of agriculture’s emissions are from livestock

The aim of the session was to launch this report, which warns of climate catastrophe without urgent action to cut meat consumption.  The author of the report is Chief Policy Adviser at Compassion in World Farming, Peter Stevenson, who said “The central role that food and agriculture plays in the climate crisis has been virtually overlooked by world leaders”.

He noted that by 2050 food production emissions would increase by 87% compared to a lower level for fossil fuels.  There is a significant impact from cattle with a lesser impact from crops.  The emission could be reduced considerably if people were to adopt a flexitarian diet, which is primarily a vegetarian diet with the occasional addition of meat or fish.  One EU study recognised that emissions need to be reduced by 75% to reach the targets of the Paris Agreement.  Another study reported that  flexitarian, vegetarian or vegan diets would give reductions between 45 and 75%.

This session was organised by CARE International, and the main speaker was Hedvig Sveistrup, Climate Campaigner.

This was a capacity building session on integrating gender into locally led adaptation planning.

Delegates were asked to consider why gender justice is crucial to building climate resilience for all.  The double injustice of climate injustice, which highlights the fact that people living in poverty are the most affected by climate change impacts and have limited resources to face extreme and increasingly unpredictable weather conditions, sits alongside gender inequalities whereby opportunity and resource differs between women, men, girls and boys still exist worldwide.  This double injustice impacts on the level of vulnerability, resources, and adaption options and people of all genders must anticipate or react to the shocks and stresses of climate change.

The session covered a case study carried out in Bangladesh considered the differences in the traditional roles of women and men in their local communities with an explicit focus on women’s economic empowerment.  In particular, the barriers faced by women for adaptation in agriculture was addressed and it was agreed that poor women are not regarded as “economically active” and only men are considered as ‘farmers’ and focus of the policy makers and service providers. 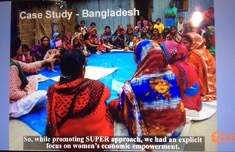 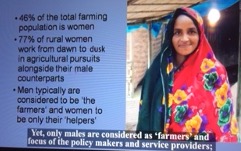 This was indeed a most impressive and inspiring presentation.  Al Gore is well known for his passion for climate action and he shared that passion with us, leaving us all keen to do more.

He shared details of the impact of climate change with us by showing photographs of climate action disasters which had occurred around the world.

He then talked about the possible solutions:

To achieve all the above, we need to change capitalism – we need multi-stakeholder capitalism.  We all need to play our part in addressing climate change.

Finally, he referred to Climate TRACE  which is an independent group harnessing satellites and artificial intelligence to advance emissions monitoring through direct observations and open data.  It monitors and publishes greenhouse gas emissions within weeks.  It was launched in 2021 before COP26 and improves monitoring, reporting and verification of both carbon dioxide and methane.

He concluded with a quotation from Nelson Mandela “It always seems impossible until it’s done”.

The session started with a video of young people from around the world who had attended a mock COP.  The first speaker was the Rt Hon Nadhim Zahawi MP, Secretary of State for Education who quoted Prime Minister Boris Johnson saying “It’s one minute to midnight on that doomsday clock.  The people who will judge us are children not yet born.  If we fail, they will not forgive us”. Referring to the Paris Agreement, Mr Zahawi went on to stress the goal of keeping 1.5 degrees alive and that dealing with this was the challenge of our generation.  We need to invest in education for our young people because we need more wind turbine technicians, solar engineers, nuclear scientists, etc.

The Rt Hon Anne-Marie Trevelyan, Secretary of State for International Trade of the United Kingdom, spoke next and said that it is only by working together that we can achieve net zero by 2050.  It was vital to aspire to a better, greener future.

The third speaker was Professor Roberto Gingolani, Minister for Ecological Transition in Italy and a COP26 leader who referred to a manifesto for young people which had been discussed for adoption.  He agreed that a Youth COP should be an annual event as the young people made a positive commitment.  He said that all education is relevant – children, adults, teachers, the general public, etc.

We then heard from two young speakers:

The session concluded with a panel discussion involving the young people.

Gonzalo Munzo, one of the two UN High Level Champions appointed to COP26,  opened the session.  He noted that their role is to moblise people related to governments, non-government organisations and civil society organisations to work together to address climate action.  This event took place under a ‘Talanoa Dialogue’, a process designed to help countries implement and enhance their ‘Nationally Determined Contributions’ by 2020. It was launched at COP23 under the Presidency of the Republic of Fiji.  The Dialogue was mandated by the Parties to the United Nations Framework Convention for Climate Change (UNFCC) to take stock of the collective global efforts to reduce the emissions of greenhouse gases, in line with the goals of the Paris Agreement.

Mr Gonzo said it was important to determine how we can transition our society in a way which ‘leaves no one behind’.   He added that many people are disaffected by climate change and climate action.  They are trying to analyse the situation today and then position ourselves in a different logic – the right trajectory.  We have the opportunity to look at society today and consider all elements moving forwards.

Rajiv Joshi, former Chair of the Scottish Youth Parliament (2005 – 2007), CEO of Bridging Ventures and Lead Author of ‘The Decisive Decade Inquiry’, and Kumi Naidoo, former International Executive Director of Greenpeace (2019 – 2016) and International Secretary General of Amnesty International (2019-2020) were two of the key speakers.

Second session: The Ocean Ecosystem – From Green to Blue

Andrea opened the sessions by explaining that blue ecosystems cover the main part of the southern continents except Antarctica and are comprised of sea grass meadows, tidal salt marshes, grass herbs and mangroves.  The main focus of this session would be on the importance of the mangroves in our ecosystem.  She noted that there are over one hundred mangrove species worldwide.  Since 1996 there has been deforestation of mangroves covering an area thirty-five times the size of Glasgow and this has had an enormous impact on the ecosystem worldwide and especially with building on coastal areas.

Julian referred to the importance of preserving mangroves in areas such as the Sundarbans in Southern India do to the threat to wildlife such as the Bengal tiger.  He noted that mangroves absorb 2-5 times more carbon than other trees and also ten times faster. They also act as filters improving water quality and can be used for timber and to create areas for fishermen.

The Paris Agreement, the legally binding international treaty on climate change, was adopted by 196 parties at COP21 in Paris on 12 December 2015 and came into force on 4 November 2016.  The long-term temperature goal is to keep the rise in average world temperature well below to well below 2 degrees Centigrade and preferably limited the increase to 1.5 degrees centigrade.

Mr Felix Ross, Director of the Legal Affairs Division and Principal Legal Advisor, UNFCC, opened the session. He explained the role of the committee in covering the parties’ compliance with the Paris Agreement.  The Committee is the only constituted body that has not met live during the last two years due to COVID-19, but they have been working together virtually.  It is there to support the parties to comply with their commitment to the Agreement.  Their work is challenging and not always popular with the parties and, therefore, they need to be supportive and hopefully, over time, the parties will see they are being helped rather than told off.  In the future, they would like everyone to share their views of the Committee.

This event was hosted by the UNFCC in partnership with Camda and the ClimateWorks Foundation.  The Global Climate Action Portal is a UNFCC online platform which tracks the climate action of non-Party stakeholders from around the world.   Over 25,000 non-Party stakeholders from over 160 countries, and 151 co-operative initiatives, including initiatives announced at the UN SG’s 2019 Climate Action Summit,  are now registered on the portal. An announcement was made regarding the enhancements made to the UNFCCC Global Climate Action Portal (GCAP) to support the tracking and recognition of credible action.   There was also a new declaration by Camda, a community of data and analytical experts which was formed in 2017 in response to a request from the Executive Secretary of the UNFCCC.