“A pre-UNEA 4 event, hosted by The Carnegie Climate Engineering Governance Initiative (C2G2), was held on 6 March 2019. The topic for discussion was Learning to govern geoengineering: insights from different experiences on environmental governance.

When I first looked at the topic, I was hesitant to attend the event because, one – it sounded really technical, and two – I had no idea what ‘geoengineering’ was all about. However after checking with the guru of all information i.e. ‘google’, I decided it would be a good opportunity to learn more about the topical issues concerning climate change and global warming.

The effects of climate change and global warming are all around us. Extreme temperatures are being recorded around the globe.

We experienced this first hand during the UNEA 4 Conference. In the span of only one week (11 – 18 March), coinciding with UNEA4, thousands of lives were lost in disasters related to climate change. For instance 58 people perished in Indonesia’s Papua floods, and 500,000 others were displaced and relocated; over 300 people died in the Tropical Cyclone Idai that hit Mozambique, Zimbabwe and Malawim leaving a trail of devastation in its wake, particularly in Mozambique and Zimbabwe; current extreme weather conditions in Kenya have caused famine in some regions, and pose a big threat to both human and animal life. 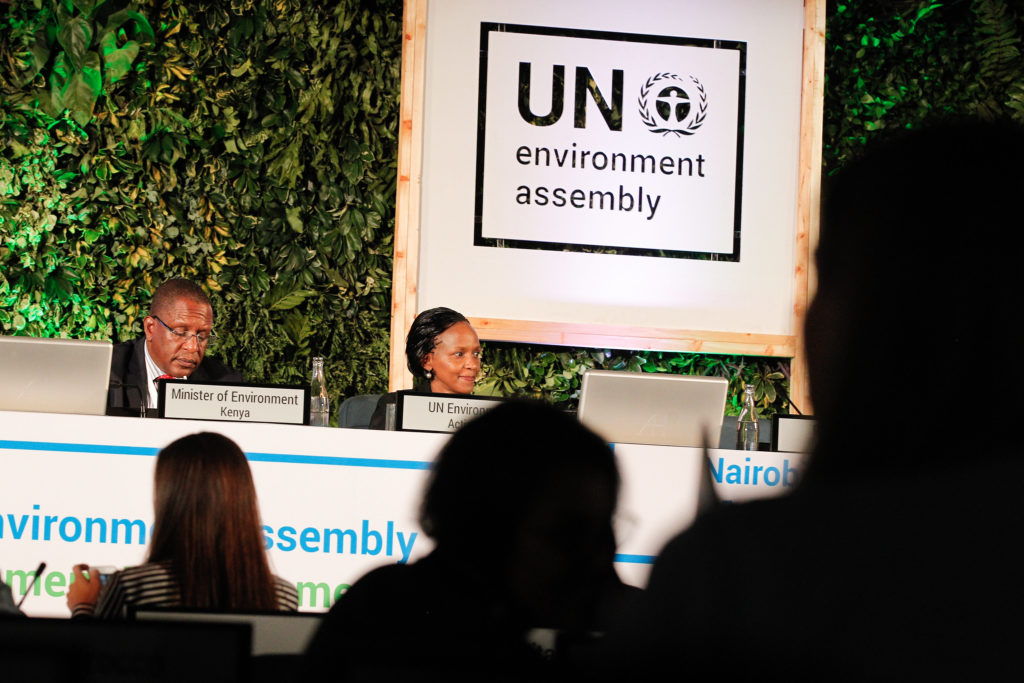 I was not disappointed and at the end of the 2-hour session had leant a thing or two from the various presenters, panel and audience including:

The biggest uncertainty is the lack of consensus on what should be governed.

Governance of large scale CDR or SRM will have to be designed to ensure its support for sustainable development to substantially reduce the risk of negative impacts, and include the possibility to prevent or ban use. As the effects of global warming become increasingly apparent, a precautionary approach – whether or not to consider large-scale CDR or SRM as part of broader risk management response to climate change – is becoming a serious governance issue. A governance mechanism that evolves in parallel to scientific research is needed in view of the uncertainties and knowledge gaps. Members of the international community need to consider the policy issues that large-scale CDR and SRM raise, with a view to developing international governance.

An inclusive approach to such deliberation will require the engagement of various levels of government, non-governmental and civil society actors, ensuring sufficient alignment to establish societal legitimacy for any proposed governance framework and decisions taken within it. This could be achieved through a process of learning and knowledge-sharing within and between governments and other actors (in particular those representing less developed countries, indigenous and local communities) to increase understanding and inform future decision-making on governance.

The concerns, risks, uncertainties, knowledge gaps, lack of consensus and issues outlined above, highlight the complex issues under discussion in relation to geoengineering, and probably informed member states reluctance to push through Switzerland’s draft resolution.

At the UNEA 4 closing plenary, some member countries expressed regret that the draft resolution was not endorsed and urged further engagement on the same.

Soroptimist International (SI) as a stakeholder has a huge constituency (women and girls) that would be impacted by any policy decisions made in regard to thedeployment of geoengineering technologies.

SI must therefore of necessity identify and align itself with partners who will fight for/defend and push through resolutions that advance sustainability through sustainable practices that do not adversely expose and endanger the lives and livelihoods of its constituents.

(This report is also informed by a paper prepared and published by the Carnegie Climate Geoengineering Governance Initiative (C2G2) which is an initiative of the Carnegie Council for Ethics in International Affairs).