Young people, especially young women have been the focus of UN Women’s work for some time now.  A Youth Panel session took place in the appropriately named Malala Yousafzai Auditorium at the Mexico Generation Equality Forum and was moderated by Executive Director UN Women Phumzile Mlambo-Ngcuka.

She asked each of the panelists to describe where they saw the world for women and girls five years from now, in 2026. Each of them was amazingly optimistic, presenting a changed world and covering many of the issues that the global community has been endeavouring to move forward for well over the 25 years since the Beijing Declaration and certainly since the first Women’s Conference in Mexico in 1975.

I was pleasantly surprised, if not amazed, when Ilayda Eskitaşçioğlu from Turkey thought that every girl would be in full-time education by 2026 – surely something we as Soroptimists would wholeheartedly endorse.

Ilayda is a member of the UN Generation Equality Youth Task Force. It is UN Women’s mechanism for supporting young people to follow through on the Beijing Platform for Action and Declaration, encouraging them to take part in Generation Equality and to act as ambassadors for the achievement of gender equality.  Ilayda is an attorney at law and a research fellow at the UNESCO Chair for Gender Equality and Sustainable Development, specialising in international human rights law.  As a passionate women’s rights advocate, she founded an NGO named WeNeedtoTalk in 2016, aiming to empower rural women in Turkey by providing them access to sanitary materials and to destroy the stigma around menstruation. She was chosen to represent Turkey at the 2016 G(irls)20 Summit in Beijing and is still an active ambassador leading working groups on youth empowerment. Her country is currently in the limelight on women’s rights and yet she remains optimistic.

Later during the session, in answer to a question from Phumzile about the challenges ahead, Ilayda recognised that COVID–19 had put this goal back a few years at the moment but was confident that if priority was given by governments, the target of gender equality could be achieved. Ilayda saw education as a means by which young women could be lifted from poverty and hunger, gaining knowledge and skills to take them through life, and protecting their health and that of their families. This would enable them to take an equal place in their communities. Phumzile summed this contribution up as “so you think that education is a silver bullet for gender equality”. 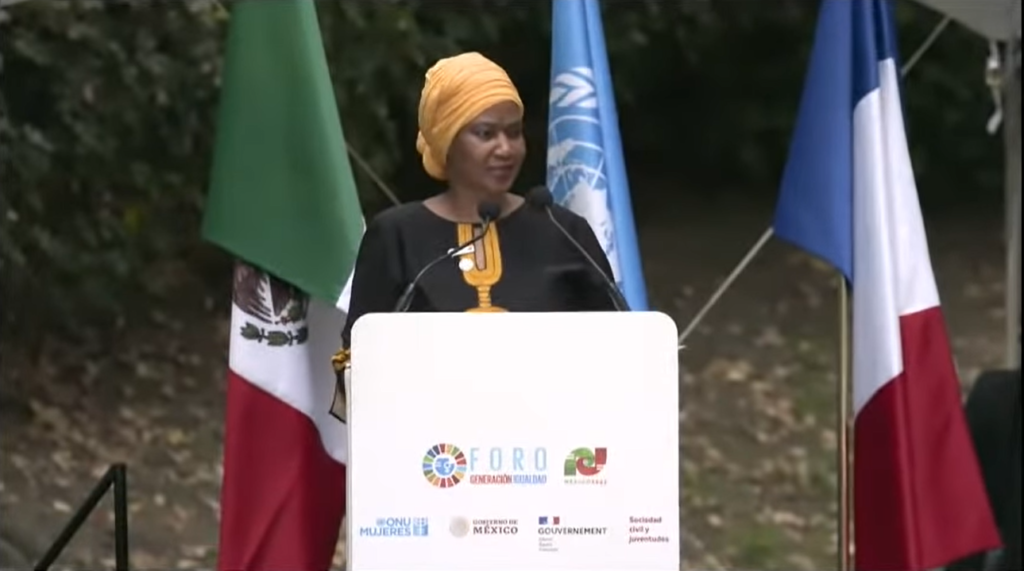 Each of the young women panelists from Saudi Arabia, Uganda, and Guatemala were equally confident that if enough effort was put in, the goals for improving the lives of girls and young women could be achieved.  They covered the wide range of issues we are familiar with from discussion at the Commission on the Status of Women, such as all forms of violence against women and girls, the effect of climate change on women and girls, the need for young women to take on leadership roles and be decision-makers and much more. In spite of having worked as an activist and advocate on these issues since I was their age and seen only slow progress over the years, I was wholly inspired by them.

Earlier in the day, at the first session of the Forum, many governments had made commitments to move the agenda on to achieve SDG5 so perhaps these young women have every right to be confident.  However, having sat through many hours of discussions at CSW and in other UN Forums, I remain sceptical that our governments will translate their rhetoric to action, to legislation, and then to the monitoring which is needed to ensure implementation.

However in counterbalance to my concerns, each young woman panelist spoke with confidence and was articulate, well prepared, and had a good understanding of the issues relating to women and girls facing the world.  They are prepared to be strong advocates for action, but also willing as individuals to take responsibility and contribute their own actions.

Lopa Bannerjee from UN Women summed up their enthusiasm and commitment, thanking them for their contributions, but recognising that the future lay with them. She said that they had been inspirational and would motivate many others.

As Executive Director of UN Women, Phumzile Mlambo-Ngcuka has been instrumental in bringing the voices of young people to the table in many UN forums. As she will be completing her term of office this year, this will be a wonderful legacy for her to leave behind taking forward a cohort of young people committed to gender equality whilst understanding the UN processes and systems.

The last session of the Mexico Forum was rounded off by government and Civil Society representatives committing to carry the Generation Equality agenda and discussions forward to Paris later this year (30 June – 2 July).

Amongst the final commitments made were:

Watch the video recording of the Closing Session of the Generation Equality Forum HERE.