A blog by SI Advocacy Coordinator, Hannah Agius, following her first visit to the United Nations Office of Geneva for the Beijing +25 Regional Review Forum, 28-29 October.

“Walking into the assembly hall for the first time was a real rush of excitement, never before had I been surrounded by so many individuals committed to progressing the rights of women and girls. As I found a seat in the civil society section, I caught snippets of surrounding conversations, all of which were laced with enthusiasm, expertise, and determination. This set the tone for the two days that followed.

The opening session introduced the key areas of progress across the 12 critical areas of concern as set out in the Beijing Declaration and Platform for Action. Next followed a discussion about what have been the major obstacles in achieving gender equality and the empowerment of women in the past 5 years. You can watch the full session here. Throughout the two days, I attended as many sessions as I could, noting areas of progress, areas of decline, and frameworks for improvement and implementation. I could have written chapters on the lessons I learned but here is a brief summary of my key takeaways…

Lack of gender-disaggregated data, across all fields, was repeatedly noted as a key obstacle to gender equality. Inadequate data hinders appropriate budgeting for social protection services, health services, educational opportunities, and leadership positions. There was a unanimous call for Member States to ensure that data is not only sex-disaggregated but must also recognise other junctures such as age, race, and physical ability. Improved data will ensure better transparency, accountability, and implementation across all gender equality efforts.

Twenty-five years after the adoption of the Beijing Declaration and Platform for Action, many obstacles still originate from gender stereotyping. Even in regions that are close to achieving gender equality in law, the lived reality falls short. For example, there is an ongoing expectation placed on women to be primary caregivers. Women spend more time on unpaid work than men, they often take a more active role in household duties and hold primary responsibility for the care of dependents. This leaves women with less time for themselves which impacts on their mental and physical health, also restricting their opportunities for education, training, paid work, and subsequently restricts their access to leadership roles. It seems we are far from achieving equality regarding the work/life balance in many of our communities. Furthermore, studies show that gender stereotyping can impact the type of roles girls aspire towards, both in education and in leadership. 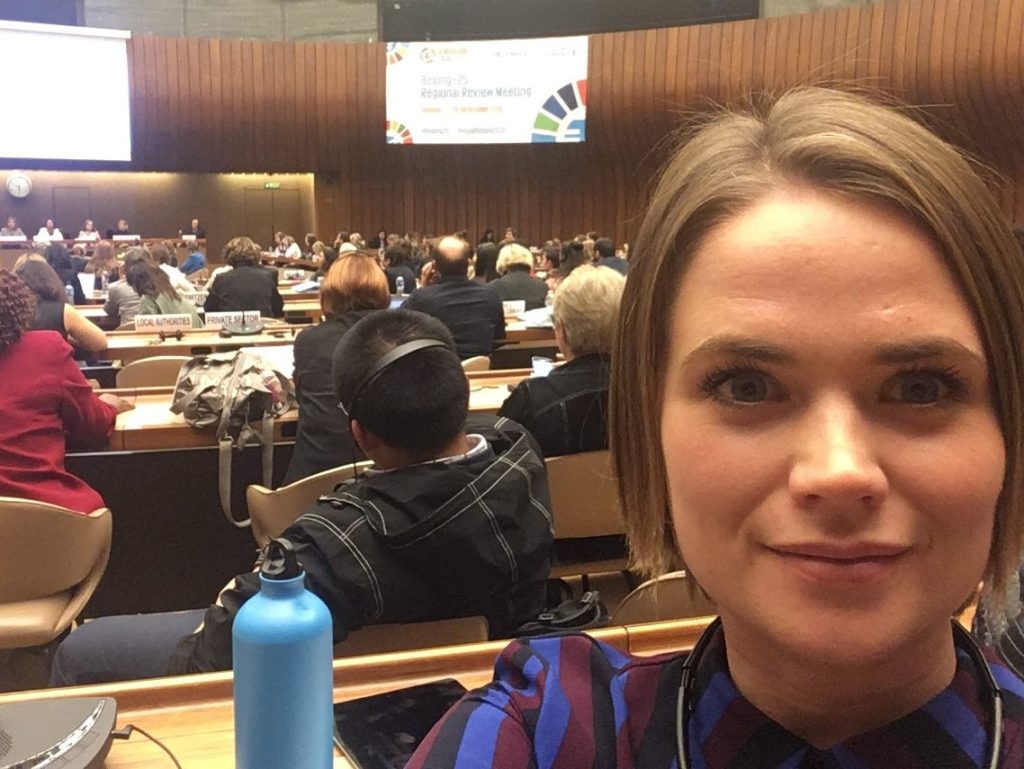 Since the Beijing Platform for Action was first adopted, internet use has grown tremendously. Panellists noted that the internet has huge implications for women. Used responsively, it can, inter alia, promote positive role models, provide accessible learning opportunities, offer a voice to those who would otherwise have no platform, and be utilised as a means of sharing best practices. However, there was a general recognition of the growing backlash against women’s human rights defenders which has been facilitated by the internet. Interventions from civil society called for member states to do more to prevent hate speech and intimidation. There was also a push to promote women’s participation in the tech industry because although progress is being made, it is not happening fast enough, nor has it been far-reaching enough, and many women are at risk of being left behind.

These challenges to gender equality may have left me feeling disheartened if it wasn’t for the clear vision and determination of those participating in the review forum. This forum was a brilliant facilitator for the sharing of knowledge and experiences. Member states and civil society were able to discuss implementation frameworks, compare successes and failures and most importantly, learn from one another. It was an honour to be a part of the Soroptimist delegation and support the advocacy team as they worked with fellow experts in a persistent call for action. Seeing so many prominent people taking an active role in pushing for gender equality was inspiring. As long as we all remain active in our efforts and keep working together, I feel optimistic about what lies ahead”.