Blog by Pat Black, SI Statements Advisor following her attendance at the ‘Smart Investment: financing for gender equality’ side event at the Beijing +25 Regional Review Forum in Geneva, 28-29 October.

“Investing in half the world’s population to see progress towards the achievement of the Sustainable Development Goals is a no-brainer isn’t it?

The opening statement for the side event at the UN ECE meeting in Geneva by moderator Helmut Berger, Head of the Parliamentary Budget Office, Austria confirmed this. He said that “Only increasing investment will bring progress. Gender equality needs financing.”

The world needs greater investment of resources and recognition of how important this is for every country to make progress. Each of the panelists presented the work which their organisations are involved with and continued to reiterate these points.

Eglantina Gjermeni, Chair of Parliamentary Sub-Committee on Gender Equality, Albania outlined the changes which have been taking place in her country through direct action and structural form over the last five years. Gender budgeting is embedded in all public financing policies and decisions, under pinned by improved collection of disaggregated data. This is one of the key asks which SI has been pressing for at the United Nations over the last few years, especially at CSW. Until we see changes to data collection we will not be able to monitor what is happening or whether the targets for SDGs are going to be met by 2030.

Ms Gjermeni recognised the challenges which the country still faces: they are recognisable across many countries. She cited the problems faced in rural areas, but also of human trafficking especially of young women from her country. Although laws are in place, it is often recognised that law enforcement in some areas is a problem, while the prevention of VAWG (as in many countries) continues to undermine the progress which is being made towards gender equality.

Moving on to women in business and as entrepreneurs Anna Björnermark, Associate Director for Gender Mainstreaming and Access to Services, European Bank of Reconstruction and Development (EBRD) pointed out that this is probably an area across many countries where women have a long way to go to achieve equality.

The EBRD works with the private sector as a focus but also the public sector in many countries in Europe. Female Entrepreneurs have difficulty getting credit especially as many women have a lack of collateral and credit history. The EBRD works with local banks to overcome this by endeavouring to develop capacity building both within the banks and for the business women. 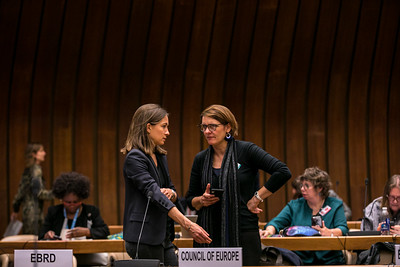 Difficulties in access for employment with companies exists because of national restrictive labour laws. It is necessary for campaigns to work on getting these laws changed or removed and challenging stereotypes in a wide range of sectors.

The role of the International Labour Organisation (ILO) is important in supporting these efforts and Governments need to be reminded of international agreements which can lead to change. The ILO provides a huge resource bank of reports and statistics for example on the gender pay gap across all Member States.

Janet Veitch, Civil Society Representative (Chair, UK Women’s Budget Group, United Kingdom) set up the independent UK Women’s Budget Group (WBG) to engage Civil Society Organisations (CSO’s) in state budgeting work. Many academics and activists have become involved providing research on public sector funding. In the UK, fiscal and other policies are determined first, then almost as an afterthought women or gender budgeting may be considered. Many reports have been produced by WBG demonstrating the impact of UK policies on women and families but women are still not ‘at the table’.

Time and again statistics demonstrate the impact of austerity on women – in the UK 86% savings in public sector come from services for women. This will continue unless gender budgeting is embedded into the whole process and more women are part of Treasury teams. Even across Europe few women are Finance Ministers.Across the Financial Services sector this pattern is repeated with under representation of women at senior decision making levels.

Dana Haidan Georgakarakou, Private Sector Representative, Regional Head of Social Impact, VISA spoke about the need to develop financial literacy for women which would in turn strengthen community resilience. She said that the statistics show that “Men have to work harder to achieve an improved national GDP if they don’t include women”. She reiterated what previous speakers had said not just in this session but across the whole review forum – “that women must have a seat at the right table”

Delegates reinforced everything which had been said quoting examples from their own countries of the lack of progress across all aspects of financing for gender equality.

Recently the ILO and UN Women published a handbook covering options for supporting social protection schemes, another way of lifting women, especially out of poverty, and providing public services. The handbook is important to counter arguments that social policies are not affordable, or that austerity/public expenditure cuts are inevitable during adjustment periods. There are alternatives, even in the poorest countries. The handbook offers practical guidance, with case studies, on how to expand fiscal space and generate resources to achieve the Sustainable Development Goals (SDGs) and realise human rights.

Probably for all of us listening at this session there was nothing new added to the discussions except for the urgency with which this must be addressed.

It makes total sense to embed gender budgeting in all aspects of any country’s policies, ensuring that funding is available to implement those policies.

It makes sense to involve women in financial decision making, ensuring they are able to contribute across all sectors of employment and to encourage women to build businesses which contribute to the growth of GDP in any country.

It makes sense to ensure that women are not living in poverty, that they have equality of income and access to quality public services for health and education.”