We are delighted to invite you to register for the 4th webinar in our SI Voices series! –  this time taking a look at a key theme of the SI President’s Appeal, Female Genital Mutilation (FGM).

Hosted by SI President, Sharon Fisher, and SI President Appeal Co-ordinators, Olga Sidenko and Ayushi Kundu, we are honoured to be joined by activists from the first Road to Equality project: Maggie O’Kane, of Global Media Campaign to END FGM, and members of the Soroptimist Six!

Promising to be an extremely interesting and enlightening webinar, please register now to ensure your place.

Please register in advance for this meeting at:
https://zoom.us/meeting/register/tJ0pc-CgqDovH9IHLku_PobHkgq0FwwJAQ4B

After registering, you will receive a confirmation email containing information about joining the meeting. 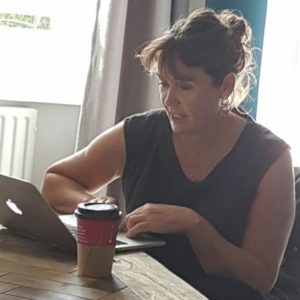 Maggie O’Kane is the executive director of the Global Media Campaign to End Female Genital Mutilation, set up by The Guardian in 2014. It has since expanded to become an independent charity working with a number of NGOs and private foundations including The Human Dignity Fund, UNFPA, PLAN, UNICEF, Save the Children, UN Women, and the Danish Government and the Wallace Global Fund. Maggie is also the Chair since 2017 of the Board of the European Press Prize.

She left the Guardian in 2014 to establish the Global Media Campaign to End Female Genital Mutilation, Expanding the media FGM campaign she co-launched at the Guardian in 2014. The Global Media Campaign is an international media network that supports frontline community activists and journalists to accelerate the end of Female Genital Mutilation by using both local radio, TV . 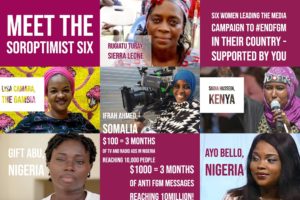 The SI Road to Equality is providing Direct Action Grants to fund six graduates in their fight against FGM. Your donations have empowered the Soroptimist Six with the valuable tools and opportunities needed to accelerate their action through airtime on radio and television, and to maximise their message and reach, so that they may become a voice for the voiceless, and drive the campaign against FGM forward.

Read all the stories written about their amazing work, plus further information on FGM here.

SI Voices – ‘Ending FGM on the Road to Equality’ will take place on the Zoom platform. If you have not used Zoom previously, please download the Zoom App on your desktop, laptop, phone or IPad,  in advance of the webinar to ensure you can access the webinar easily.