In the 2nd in our series of Q&A’s we talk to Soroptimist Ayushi Kundu, Coordinator for the SI President’s Appeal 2019-2021, ‘The Road to Equality’

Please tell us a little about your background and how you became a Soroptimist?

“I am a lawyer, currently working as an Advocate at the Calcutta High Court in India, and a second-generation Soroptimist, having followed in my mum’s footsteps into my profession, and also the lovely organisation I am a part of. I became a Soroptimist on 20 December 2014, just a little over 5 years ago, while I was still in law school. For the longest time I’ve been the youngest Soroptimist not just in my Club, but also in my country.

After completing an undergraduate in law, I went on to pursue an LLM in Human Rights Law from Queen Mary University in London, United Kingdom. My modules included the Human Rights of Women, and International Child Law. Needless to say, such a choice of modules was inspired by my passion to serve society. I realised that this knowledge would be an asset to my aspirations of becoming a social activist/worker and would help me understand and see the core issues affecting women and children in a different light. 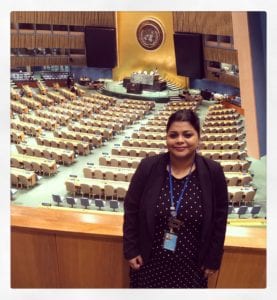 Photo: Ayushi at the UN Headquarters

Is there one key issue that drives you – something you feel truly passionate about and why?

There’s definitely more than one issue here, but I’ll talk about my favorite… I have realised over the years that women are powerful beyond imagination when it comes to lifting up and supporting other women. Sadly, women can also be the biggest enemy of each other. However, when they choose to go by the former, miracles happen! And as an educated woman, who has always been given a fair chance alongside her male counterpart in the family, who has never been stopped from becoming independent, financially, intellectually and emotionally, I feel very empowered and I also feel the need to use my understanding of women’s issues and the compassion I feel from the bottom of my heart for my fellow human beings, to make miracles happen…every single day! I’ve never been able to explain and/or express to people how passionate I feel when I get the chance to stand up for someone or help or support someone. It’s a drive that comes from my gut!

How important is Youth Activism –youth-led movements and organisations in transforming norms and creating a more sustainable and equal world?

I don’t think I can quantify the importance of Youth Activism….it’s not just important, it’s imperative. It’s about us taking control over our future, saying that enough is enough, now we want things to happen this way or we do not want things to happen this way. Look at Greta Thunberg, for example, she has taken the world by a storm! A young woman saying things which we knew all along but failed to take any action against…we were waiting for someone to come and open our eyes. There are endless more such examples to show how the youth is taking charge to create a more equal world. But most importantly, the sensitivity among the youth to such issues is equally, if not more important than the actions being taken. We cannot have half of the youth population proactively taking on world issues, whereas the other half remains blissfully ignorant. That only negates all the positive impact created. 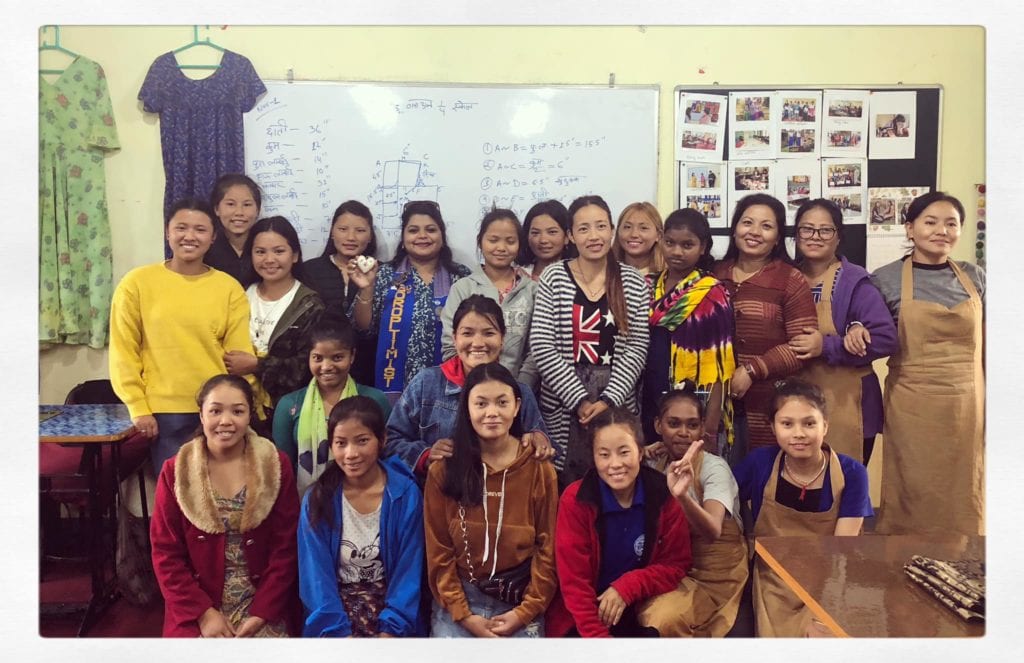 Photo: Ayushi with members of the Chora Chori project

Who do you most admire and why?

Ahhhh that’s difficult territory and there are so many people I really admire and look up to. How do I name just one? There are many, including my parents, who have shaped my thoughts, ideas, and opinions and have influenced my general outlook on life and all that comes along with it. But if I had to pick one, I’d say it is my maternal grandmother, whom I fondly call Didun (many Indian children have affectionate names and variations of names for their grandparents, and this one is mine). My granny has been my forever role model and despite the occasional (or perhaps several!) differences we have in our opinions, she is that one person with whom I can endlessly discuss and debate on various issues. For me, she is a personification of women’s empowerment. She came from a small town, dealt with several family problems, raised a daughter, but never, for even a day, gave up on what was dear to her. Education – having her own career and generating an income from it which provided her with financial independence, having an opinion on things and making sure that this opinion was expressed, at a time when women in our country hesitated to even speak in public, let alone have their own ideas on things. Her achievements are many, but I’d say that her biggest achievement is as a human being, she has been there for others even on days when she was struggling to make ends meet for herself. It’s probably from her and then my mother that I’ve learned the importance of helping your community, society, nation, and the world! She is very very dear to me, a pillar in my life, and I have not the slightest idea where I would be without her! 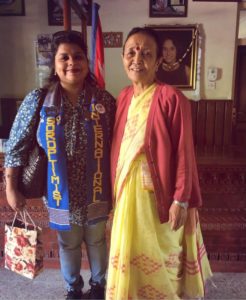 How important is an education in changing behaviour and achieving human rights goals?

I strongly endorse the saying that ‘Education is a tool for change’. People need to be educated…not just literate…and I know for a fact that many people fail to understand the difference between the two. It is through education that a person will become sensitive towards human rights goals and understand the gravity of human rights issues that we face in the first place. And given the kind of attitude people continue to have about human rights violations (ignorant, dismissive), I’d say we have a very long way to go before we can realise our dream!

#NeverAgain, #Metoo, #ENDFGM #ClimateAction – Online activism is a huge part of youth activism – what advice can you give people taking their first steps in online activism?

With the advent of technology and social media in our lives, even social activism is blossoming in new forms, one being online activism. It continues to be underestimated by many, but considering how rapidly and how far movements like the ones you have mentioned here have gone, and also considering the global reach it has, online activism is the face of the new age we live in. I do not consider myself learned enough to give advice on taking first steps in online activism, but I’d definitely like to say that when new online activism comes up, follow it, learn more about it, understand why it is happening, and spread it. You may have your own stories to share, so use this as your weapon in the wars we are fighting. This will make you feel more empowered than you can imagine, and I speak from experience. Even if you don’t have a story of your own, you are getting a chance here to hear and learn from millions and billions across the world. Often we suppress or don’t talk about things affecting us, and somehow online activism helps curate these things from within us because of the very different form of expression. When participating in online activism, use social media tools like tags and hashtags, making sure your story gets out there and is not lost in the invisible net. 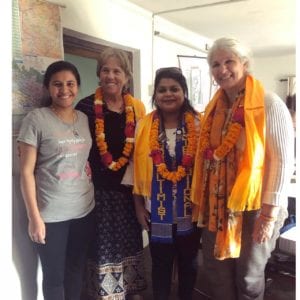 Photo: Ayushi with Days for Girls

How important are relationships within our organisation?  How can they learn from each other, and support one another?

I have the benefit of history and evidence to show me what has worked and what has failed when seeking to replicate practices from the past. I can learn from previous generations and implement the successful strategies, whilst devising new strategies that will add to the success of the movements we are a part of. In turn, for many there is a plethora to learn about social media and online activism….the general perception is that the youth are better than them at it, and perhaps I should not disagree entirely! However, I believe this two-way relationship works for all intergenerational activists in general, whether women or not.

What platforms do you use to share your messages and on and offline?

I am very active on social media…mostly Facebook, but I also use LinkedIn, Twitter and Instagram and tone my posts in a manner that is conducive for a particular social media platform. If I were to really put up an impactful or introspective message, I’d choose Twitter over the others because it allows you to reach out to your targeted audience more easily.

How vital is work at the grassroots level to transform communities – particularly in relation to the key issues you advocate for?

It is extremely important and vital for any sort of activism to be successful. Particularly in the country I come from, millions of people at the grassroots level live in extreme poverty, struggle to get two square meals a day, constantly face human rights abuses, have a minimum or no literacy, so on and so forth. They cannot even comprehend the magnanimity of the larger issues we advocate about, because their needs are so basic and require immediate redressal. For them to understand the broader picture and start talking on such issues, a lot of work needs to be done to get them at par with that population of the community which is engaging itself in advocacy and activism work. This process is going to be time-consuming and quite difficult because it is also very difficult to change the mindsets of these people unless we are able to show them immediate results”.