A blog by Linda Gillis, SI Clovis ‘Dream It Be It’ Chair

The SIA Dream It Be It; Career Support for Girls Program ® (DIBI) reached more than 50 high school girls in the rural Central Valley town of Clovis, California this year. Soroptimist International of Clovis decided to hold two separate, one-day conferences after reviewing student evaluations from the first DIBI conference. The girls served in the alternative school often face serious obstacles to participation in the regular High School. It was learned from the school counselors that it is very difficult for girls in this program to be available on weekend days because of responsibilities to family and/or having jobs. With the cooperation of the school district our club was able to remove this barrier by offering this important program during a school day!

We discovered from the counselors that the DIBI curriculum is closely aligned with the goals of the Transition Program, which targets students who may be homeless, those in foster care or teen mothers.  Eight girls, many who had never had the opportunity to be in a leadership role, joined the Student Advisory Committee to help plan the 22 November conference.  They chose a ‘star’ theme, suggested door prizes, and helped transform the venue into an inviting setting that inspired the girls to define their dreams, set goals, learn strategies to overcome obstacles and explore career possibilities.

Photo: Decorations organised by the participating girls at the conference held on Saturday, 29 February.

After hours of ‘behind the scenes’ help from Soroptimist members, the conference began with small groups of girls meeting their table facilitators and receiving unique dream charms that could be traded throughout the day. Throughout the day girls earned tickets for participation and acts of kindness. The student advisory committee introduced the dream board activity by having the girls visualize their dreams for the future as they read prompts. The highlight of the day was when the girls chose two groups of professionals to have appetizers and lunch with from the following career groups: Education, Nursing, Law Enforcement, Author and Design, Attorney and Paralegal, and Occupational Therapy Assistant.  There was a lot of excitement as door prizes were given out and the grand prize winner was presented with a Samsung tablet.

Feedback from the first conference helped us fine-tune the following conference held on Saturday, 29 February. Girls were invited to attend through recruitment lunches held at each of the six Clovis Unified School District high schools. Several of the girls that attended the November conference joined the student advisory committee and provided valuable feedback. They added rainbows to the star theme and décor, meeting outside of school to create decorations. 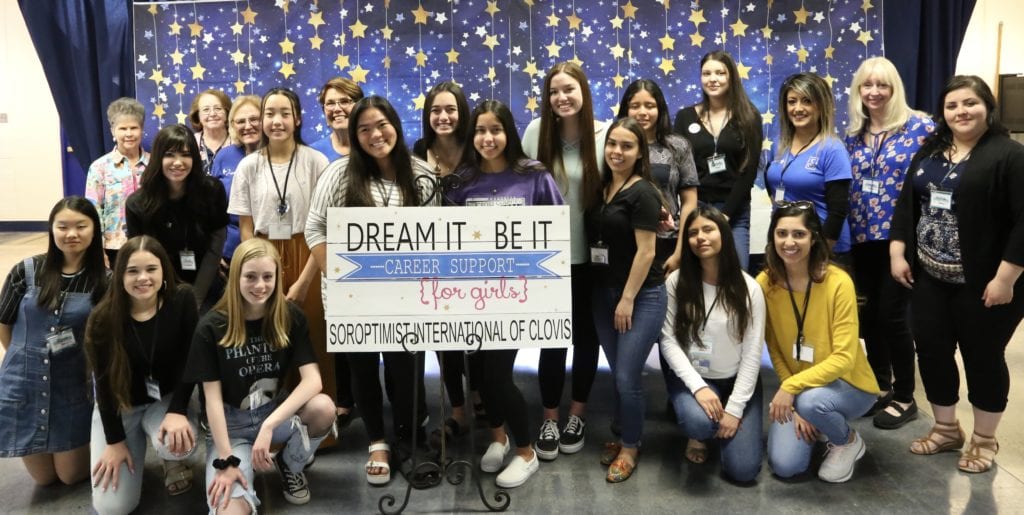 The Saturday conference allowed time for a dynamic keynote speaker, Fresno County’s youngest female sheriff deputy, who shared her inspiring story of overcoming obstacles as she was placed in multiple foster homes.  She encouraged the girls to look to the future and remember that they had all the possibilities in the world. Additionally, the girls were able to move through five career stations, including a Flight Science and Aviation Maintenance Technology station where the girls got to use a flight simulator.  One girl exclaimed, “Sitting at the controls, even if it isn’t an actual airplane, makes me feel as though this is something I can do!”

Both events were filled with enthusiastic young ladies who were eager to learn how to put their dreams into action. One of many quotes from the girls included, “My favorite part of the DIBI conference was getting to interact with supportive girls and women.” There is no doubt that the girls that attended left with more confidence and tools to overcome obstacles to achieving their goals and that our Soroptimist Club members are so pleased to be part of their journey.”