“Across the world, women’s identity is bound up with their primary role of caregiver and nurturer in the family. Cultural norms demand that they prioritise this role above all other responsibilities in the family. Women provide care towards children, taking charge of their everyday needs. Aside from being the gatekeepers of food in the family, women also take charge of the health of family members, including spouses and children.

In Cambodia, women prepare the bedding for family members. In many families living in malaria endemic areas of the country, setting up the bednet is crucial to preventing malaria. Often, women are also tasked to washing the bednet as well as stitching it should it tear.

Many women also take on the role as village malaria workers (VMWs), a volunteer position in the village since they end up staying at home with their children while their husbands are out tending to the family farm. Known also as VMWs—they play an instrumental role in conducting the rapid diagnostic tests (RDTs) and dispensing medication to malaria patients in malaria endemic villages, in both high and low burden areas. In this case, VMWs who reside in the village, make it easier for malaria patients to access timely and relevant help. VMWs represent the “first line of defence” in the fight to eradicate malaria!

These volunteers also play a vital role in monitoring bednet usage in the villages, in addition to gathering data on malaria prevalence. Moreover, they also provide outreach health education using their interpersonal communication skills and attend the monthly malaria meeting held at the district health centres where they update government health officers on their work as well as stock up on more medication, if needed. In many cases, volunteers do not have means of transport and often find themselves having to walk to the homes of malaria patients and to the district health centres.

It must be noted that their role is crucial especially since Cambodia has been battling drug resistant malaria in recent decades. The number of malaria cases has significantly declined in the last six years. The number went down from 112,047 cases in 2011 to 23,627 cases in 2016. Also, mortality rates related to malaria has dropped remarkably from 93 deaths in 2011 to 1 death in 2016 (2016 annual report of Cambodian National Malaria Control Program). The decline in mortality and prevalence rates are related to the increased usage of bednets and greater knowledge on malaria prevention in high and low burden areas—in essence, as a result of the crucial work undertaken by VMWs.

Realising that bicycles would be critical in helping the VMWs conduct their work more efficiently, three Soroptimist clubs from Soroptimist International of South West Pacific—SI Singapore, SI Damansara and SI Melba—came together in 2016 to raise funds for the purchase of bicycles for VMWs in Oddar Meanchey, a province in Northwest Cambodia. Initiated by Past President, Theresa Devasahayam of SI Singapore, US$ 20,000 was raised to purchase 199 bicycles for VMWs, seventy percent of whom are women.

In order to reach the target funds to purchase the total number of bicycles needed for the project, each of the three clubs organised cycling events in their respective cities. With the support of 7Cycle, SI Singapore organised the first cycling event in June 2016 in which 30 people participated. Participants either had a choice to raise funds using a pledge card prior to attending the event or donated towards a cycling fitness class on that day. In November 2016, Cycling for Cycles II was organised, this time in conjunction with a barbeque along a beach front. Around 50 friends of SIS participated in the event by cycling along a planned route. 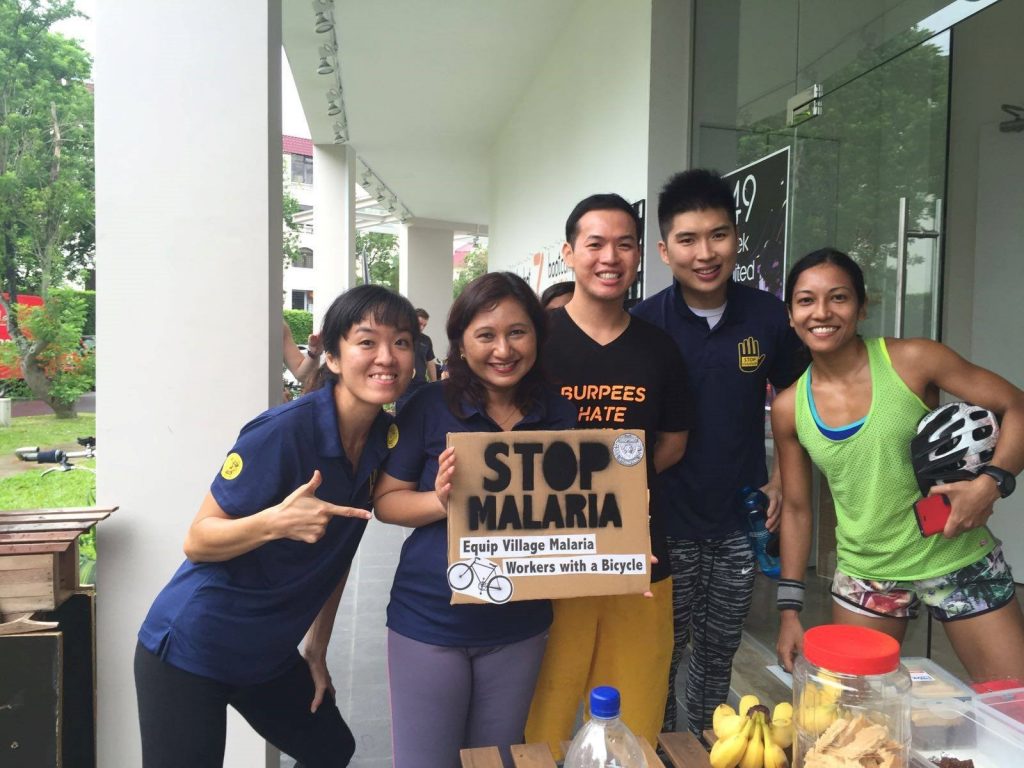 Image: Soroptimist member, Phoebe Goh and Past President Theresa Devasahayam from SIS together with participants of the Cycles for Cycle event held in June 2016.

SI Damansara organised their cycling event on 17 July 2016. Cyclists wearing brightly coloured orange t-shirts especially designed for the event rode through a 5 km route in the heart of Kuala Lumpur. It was an immensely successful event with more than a hundred cyclists participating and the project raised funds for 139 bicycles. The event also received media attention in which MayBank’s contribution to the project was highlighted in the local press. Especially noteworthy was the contribution from 16 year old Priya Anne Kumar, a student in Methodist Ladies College, Melbourne who personally managed to raise enough funds to buy 40 bicycles by running 1000 km over a period of 5 months! 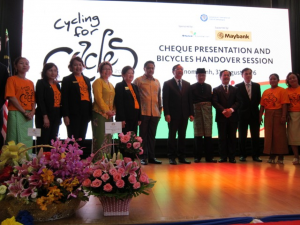 Image: The MayBank cheque presentation ceremony held at the Malaysian Embassy in Phnom Penh on 31 August 2016.

In August 2016, two members from SI Damansara, Dr Saradha Narayanan and President Joanne Yeoh, and Theresa Devasahayam from SI Singapore attended a cheque presentation ceremony organised by MayBank held at the Malaysian Embassy in Phnom Penh in conjunction with the celebration of Malaysia’s Independence Day on 31 August 2016. Attending the ceremony were government officials from the National Centre for Malaria (CNM) and Oddar Meanchey Provincial Health Department together with Dr Kheang Soy Ty and a few of the staff from the University Research Co., LLC (URC) that had implemented the malaria prevention programme in Oddar Meanchey.

On that same trip, Dr Narayanan and Joanne Yeoh visited a district hospital in Anlong Veng. In the later months of the same year, the first lot of bicycles—139 in total—was distributed to the VMWs. In February and March 2017, a further sixty bicycles were delivered to the VMWs. 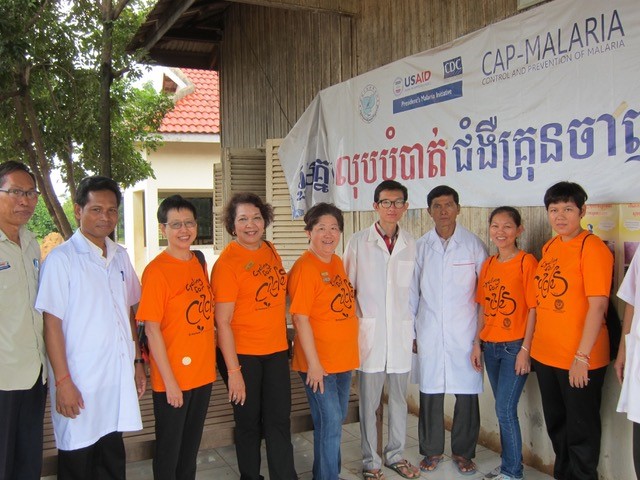 Image: Dr Saradha Narayanan and Joanne Yeoh from SI Damansara together with members of SI Phnom Penh on their visit to a district hospital in Oddar Meanchey in August 2016.

In keeping with the Cycles for Cycles theme in November 2016, SI Melba held a lunch time fundraising function sponsored by Morgan Stanley’s Melbourne Office, inviting guests to hear from Jess Gallagher, a legally blind young woman who is the only Australian athlete to have won medals at both the Summer and Winter Paralympics. Despite the challenges she faces, Jess has won bronze medals in both Skiing and Cycling. Jess’s fantastic story of how cycling helped her continue her athletic career despite losing her vision was the drawcard to the event. Then once attendees listened to the presentation by (then) SI Melba President Kerry Beer about the intent and expected outcomes from the Cycles for Cycles Project, SI Melba’s fundraising target was easily met. 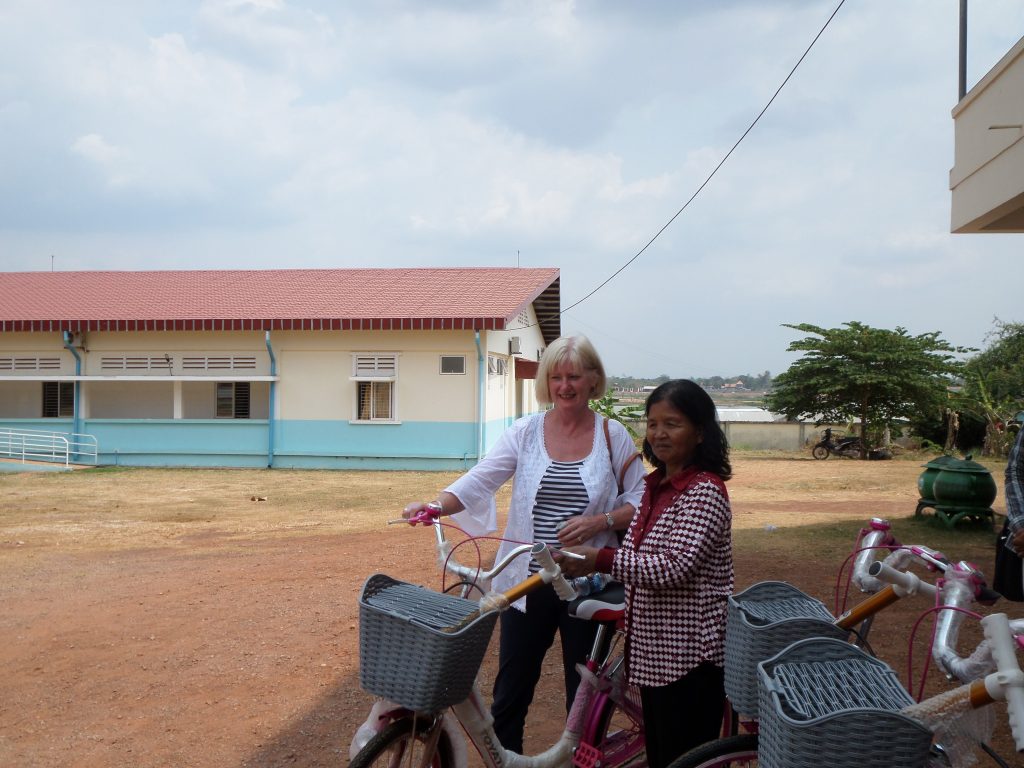 Image: Past President Kerry Beer from SI Melba presenting a bicycle to a VMW at the bicycle presentation ceremony held at Anlong Veng in February 2017.

During the trip, the group also had a chance to interview a few VMWs from the villages not far from Anlong Veng. The interviews were useful in understanding how the bicycles have helped the VMWs in their work. One VMW who said that she was thrilled to have received a bicycle in recognition of her work over the last five years, highlighting that the bicycle “reduces the difficulties” she faces in conducting her work as a VMW even though it might be slower than using a motorbike, which she occasionally borrows from others. The group also learned that the VMWs understand their role to be very important especially since “villagers have to travel very far to seek medical help if they get malaria and that it can lead to delayed treatment and even death in some cases”. As Soroptimist sisters, we were delighted to learn that not only did our efforts make a difference to the VMWs but also to the villagers and to Cambodia’s fight against malaria! 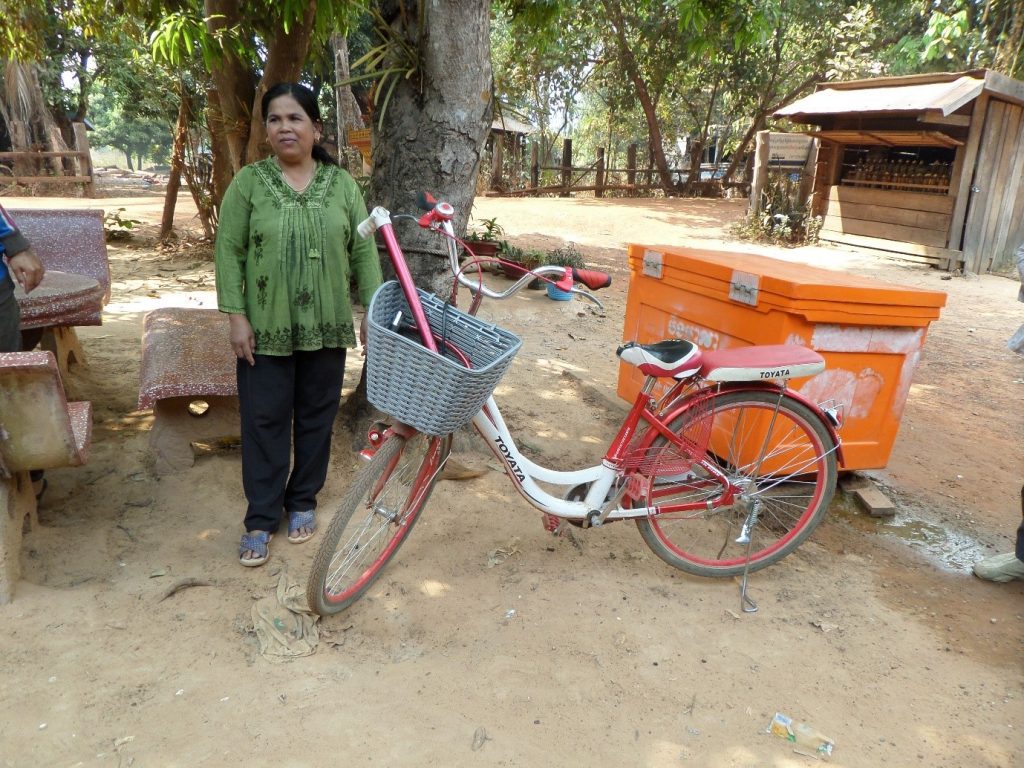 Image: A VMW from Tomnop Leu Village with her newly acquired bicycle.

An exciting footnote to this Project is that as a result of our interactions over recent times, we are happy to report that Linna Khorn from the URC CAP-Malaria Program has become the newest member of SI Phnom Penh. Welcome to SI, Linna!”