Many readers will have followed the development of the water and food security projects that took place in Kampung, (Kg.) Long Tanyit, Sarawak, and in Kg. Gana in Sabah, Malaysia as part of the 2017-2019 ‘Women, Water & Leadership’ President’s Appeal. Following this transformative and memorable project work, funded by Soroptimist donations, the SI Region of Malaysia (SIROM) was given the opportunity to assign projects for the allocation of surplus funds arising from the SI Kuala Lumpur Convention in 2019. The projects have also benefitted from award funds received by Soroptimist International as winner of The Incredible Impacts Programme 2020, courtesy of the International Congress and Conventions Association (ICCA) and BestCities Global Alliance HERE). 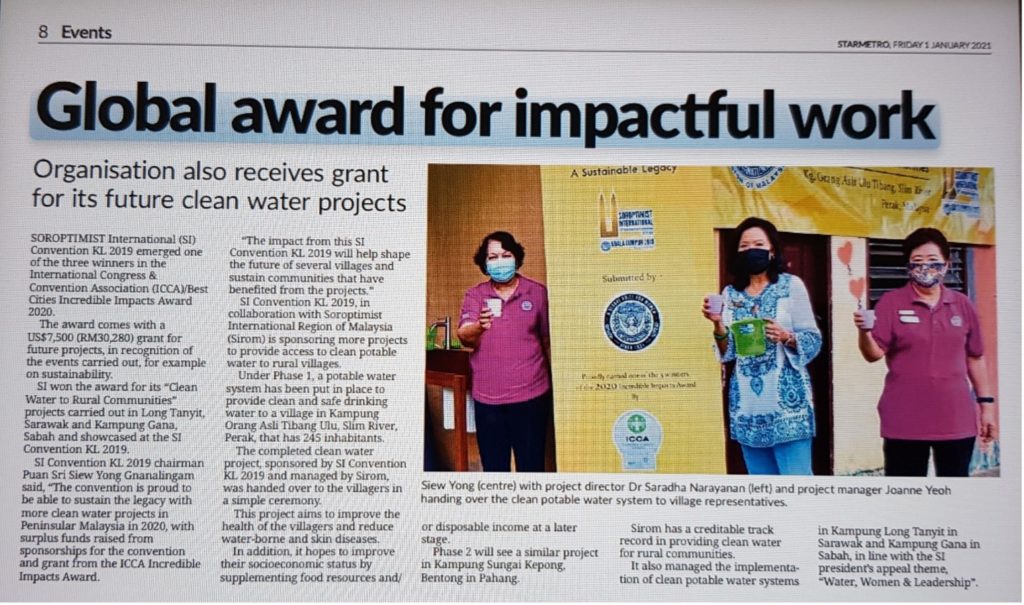 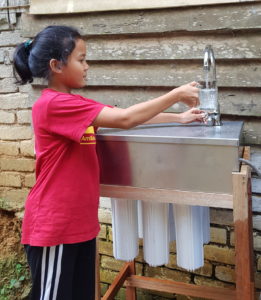 Access to Clean Water – Increasing levels of wellbeing through the provision of clean, safe drinking water was seen as a priority, and this would be done by creating an affordable and environmentally friendly water system.

Improvement in health – By taking steps to improve health it is hoped this would assist in reducing the incidence of water-borne and skin diseases.

Kg. Orang Asli Tibang Ulu, near Slim River, Perak is approximately 124 km away from the Kuala Lumpur, the capital of Malaysia. With a population of around 245, there are 55 houses, some brick, with others made of attap, a thatch made in South East Asia from palm fronds.

Many of the homes share a common pipeline which supplies water for drinking, cooking, washing and bathing. With excess water during monsoon and water scarcity due to drought, the villagers are constantly challenged in accessing quality water. Drinking water is often not boiled as this costs both time and resources (gas or firewood). A number of villagers revealed that it is common to get a tummy upset or diarrhoea. Some villagers also collect drinking water from a spring located about an hour away from the village.

A clean potable system (a Waterlily Solar Powered Water Purification System), was installed next to the community hall. The system included solar panels and rechargeable battery packs, and additionally, the toilet doors were replaced. The SI Convention team and SIROM organised a launch of the system on 17 December 2020, and distributed pails, water jugs, jerry cans and 10-litre water containers to the women in each household.  Snacks and educational materials were also donated for the children.

Although the clean potable water system is now completed, a contractor is to look into rain water harvesting as an additional source of clean water. Furthermore, it is expected that workshops will be developed to educate on hygiene and sanitation later in 2021 when it is hoped the Covid-19 lockdown will be lifted.

Kg. Orang Asli Sg. Kepong in Lanchang, near Raub, has a population of around 137 villagers. There are 28 houses and the majority are made of attap. There are 40 women in the village with 62 children; 34 boys and 28 girls. 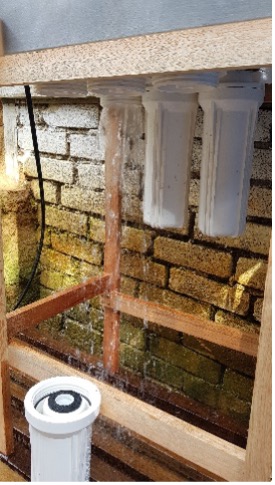 There is only one water source in the village, and that is a spring from which pipes have been connected. Most of the houses share a common pipe, which supplies them with water for drinking, cooking, washing and bathing. Village women use makeshift filters created from cloth that filter water, and again, drinking water is often not boiled.

A clean potable system (the Waterlily Solar Powered Water Purification System) was installed next to the headman’s house. As the houses in the village are dispersed, it was decided that the headman would look after and help maintain the system, and additionally, the contractor would make repairs and complete the construction of a new toilet.

A launch is being prepared to take place in the next month or so, and as with Kg. Orang Asli Tibang Ulu, it is hoped that workshops on hygiene and sanitation will be conducted later in the year when the lockdown is lifted. 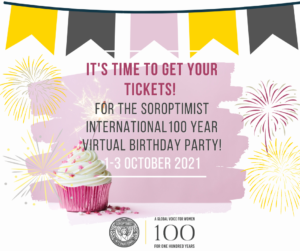