Day Two of the HLPF 2018  at UN Headquarters, New York saw thematic reviews focused on: transformation towards sustainable and resilient societies – building resilience; and advancing science, technology and innovation (STI) for the SDGs. In the afternoon, the review of SDG implementation continued, with a session on SDG 7 (affordable and clean energy).

A report by Linda Witong Special Advisor to SI Advocacy

“Pope Francis told world oil executives Saturday that the transition to less-polluting energy sources “is a challenge of epochal proportions,” and made the following observation: “Civilization requires energy but energy use must not destroy civilization”.

Mr. Adnan Z Admin, the Director-General of the International Renewable Energy Agency urged the audience to step up its efforts to achieve the goals of SDG 7, as without urgent action, the world will fall short of achieving the goals, and consequently will fail to meet the goals of other SDGs as they are all linked together. While progress has been made, a little under one billion people continue to live without electricity. At current rates, 674 million people will remain without access to electricity in 2030. If we continue with our “business as usual model” the share of renewable energy would only reach around 21% by 2030. What does this mean for women? Three billion of the people or 40% of the population remain without access to clean cooking fuels. This has a disproportionate impact on both women and girls as they are the ones who are most involved in gathering and then using traditional methods of fuel such as wood and coal. The resulting indoor air pollution causes approximately 4 million deaths per year.

The main reasons for the lack of progress are low consumer awareness, financing gaps, slow technological progress and the lack of fuel distribution infrastructure. Although modern renewable energy use has increased to 9.6% of global energy consumption and is projected to reach 21% by 2030, under current policies, this is insufficient to achieve the “substantial increase” required under target 7.2 and to mitigate climate change. There is also a divide between the rural and urban regions as rural regions need power not only for cooking but for agricultural use as well. Finally, women continue to face other challenges in meeting the demand for renewable energy from access to credit to limited opportunities in STEM fields. The solutions include making the acquisition of clean energy a top political priority and we must do this in a way which includes women as agents for change in this field. 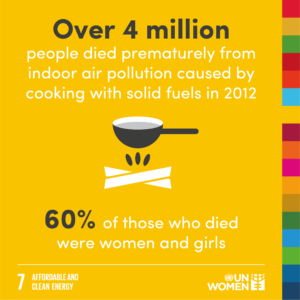 An NGO who represented the NGO community also made some very interesting observations regarding SDG 7. To begin with, she observed that renewable energy in the form of solar, wind or hydropower could have a negative impact on their community by resetting in displacement of their population as well as violent conduct including domestic violence. She also observed that while we all seemed to be focusing on how to provide clean energy to women for cooking, the assumption that women or girls would be the ones who were tasked with the duty of cooking etc had to be addressed. It was yet another example of discriminatory and traditional bias against women or girls. As my male colleague pointed out, it is yet another challenge in capacity building regarding creating the role of men or boys as cooks in their household

Algeria got the floor and protested about giving NGOs time to speak when all the States had not been given the opportunity to address these issues, when there is a constraint on time. He thinks that this is the rule of procedure. This is what is known as a hot potato”.

Find out more at: https://sustainabledevelopment.un.org/hlpf/2018