Gender equality is one of the major priorities of UNESCO, which has been given the task of leading and coordinating the 2030 Education Agenda for the UN.

UNESCO launched in 2019, From access to empowerment: UNESCO strategy for gender equality in and through education 2019-2025, a new initiative to accelerate education for women and girls: Her education, our Future  has three objectives, corresponding to its gender equality strategy:

Generate and share progress data and validate measures that have proven effective;

Mobilising resources for the education of women and girls.

Girls’ education is a force for gender equality and lasting change.

The celebration of the International Girl Child’s day on 11 October 2019 was organised in cooperation with Plan International. It opened with the presentation of the UNESCO Prize for Girls’ and Women’s Education. This prize, created in 2015 with the financial support of the People’s Republic of China, recognises outstanding and innovative contributions by individuals, institutions and organisations working to promote women’s and girls’ education. 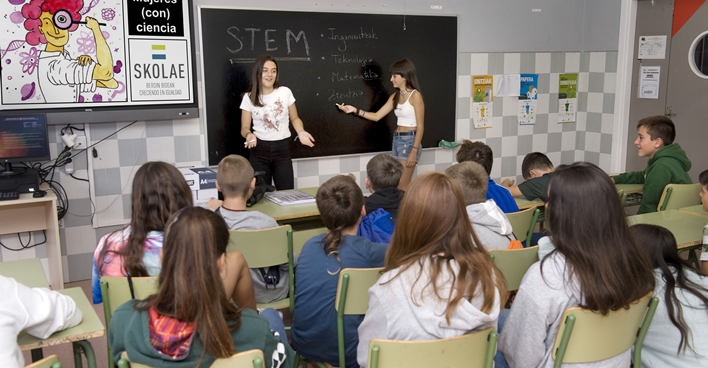 The laureates of the 2019 UNESCO Prize for Girls’ and Women’s Education received their award on the day for their work advancing girls’ and women’s education.

Founded in 2005, Sulá Batsu is a Costa Rican cooperative using digital technologies, art and culture to tell the stories of girls and young women and foster social transformation in local communities. The awarded project, Voices of Central American Girls empowers adolescent girls and is implemented in five Central American countries, offering girls in rural areas or vulnerable cities, an out-of-school training in digital technologies. Since 2016, more than 4,000 girls have enrolled in training.

The project SKOLAE: Growing in equality, of the Department of Education of the Government of Navarre in Spain, addresses students who will become teachers, and aims to train them to establish an education without inequalities – prevention of violence against girls and women, respect for diversity, identities, cultures and sexual orientations, valuing male egalitarian behaviours, empowerment of women. The project is developed in schools and requires according to its promoters, a global transformation of the school. Since 2017, the project has been implemented in 116 schools.

The round tables following the presentation of the prizes were attended by various speakers from Plan International, the French Ministry of Europe and Foreign Affairs, a representative of the Islamic Development Bank, representatives of the winners of the prizes and governments of their countries, and the Assistant Director-General for Education at UNESCO, Ms. Stefania Giannini, together with young activists, boys and girls. Several focus areas were highlighted.

– Girls’ rights have progressed, however, the gap between girls and boys is slow to close;

– Regressions are born in conflict situations or with ideologies;

– The management of menstrual periods is a taboo topic and penalises girls – toilet, hygiene, prejudice and stigma surrounding this issue;

– Imperative to involve young people, as is the case for Beijing+25, “Generation Equality” where young activists, play a significant role;

– Education must be gender-sensitive and of equal quality for boys and girls, especially in the teaching of STEM to girls;

– The education of girls and boys in families must be identical. Joint work between teachers and parents is needed;

– In line with the conclusions of the meetings that prepared the G7, and those preparing for Beijing +25, gender equality should be included in the priority orientations of government ministries, to help support developing countries to this end, and to invest in education;

– Mechanisms for financing actions for education must be implemented;

As far as the action of states and governments is concerned, we must move from conventions to accountability!