The Beijing+25 Regional Review Meeting provided a forum for The United Nations Economic Commission for Europe (UNECE) member States, to review progress and identify challenges in the implementation of the Beijing Platform for Action. Held on 29-30 October 2019 in the Palais des Nations, Geneva, the event was jointly organised by UNECE, one of five regional commissions of the United Nations, and the UN Women Regional Office for Europe and Central Asia. Berthe De Vos-Neven, SI UN Representative in Geneva, writes of the side-event: Ending Violence against Women and Girls (VAWG): Prevalence, Proposals, and Partnership. 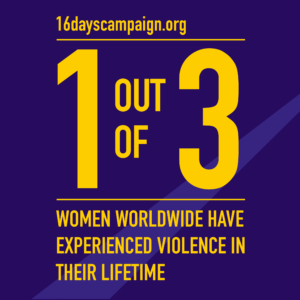 Elimination of violence against women and girls is critical for achieving gender equality and the empowerment of women. Violence is a grave violation of the fundamental human rights of women and girls, which are not negotiable. Unfortunately, it remains one of the most common crimes committed against women and needs to be fully eliminated. Although major progress has been made in advancing women’s rights, violence against women still exists widely. VAWG continues to be a global pandemic and can occur in private and public spaces, including the internet and via other ever-evolving technologies. VAWG is rooted in historical inequalities between women and men and can cause significant physical, social, psychological, and economic harm to women.

We must put gender equality high on the political agenda in each country, and bring awareness-raising campaigns to the media (e.g. the 16 days of activism campaign). Work must be done on safeguarding and educating children and young people in schools, and there must be increased learning on how to identify and intervene early in cases of VAWG.

Moreover, we must provide services to women, including legal assistance, counseling, health care, and community-based services, such as a helpline for harassment and stalking, creating a single point of contact in each police unit, and improving safety (e.g. on public transportation).

There is still a lot of work to be done to achieve the goals of 2030!”